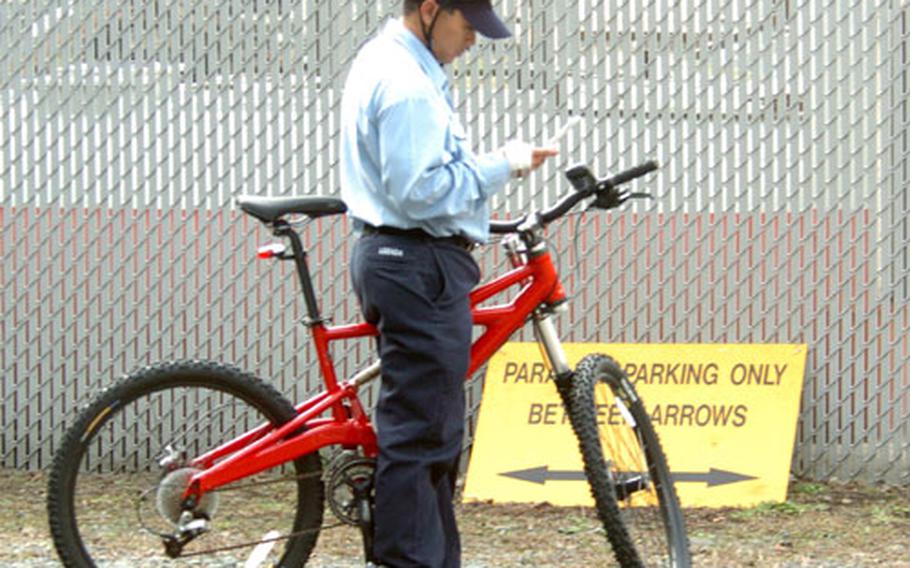 Petty Officer 1st Class Geoffrey Lozanda takes a break from his bike ride to answer his phone at Yokosuka Naval Base on Thursday. (Christopher B. Stoltz / S&S)

YOKOSUKA NAVAL BASE, Japan &#8212; Driving while using a cell phone is illegal on every Navy installation worldwide. But what about chatting when you&#8217;re on foot? What about gabbing in uniform?

For sailors at Yokosuka Naval Base, the wisdom differs depending on what you&#8217;re wearing.

Cell phones in uniformSailors can wear a cell phone while in uniform, but walking and talking on it is generally discouraged unless you&#8217;re talking shop, said Yokosuka Naval Base commanding officer Capt. Greg Cornish. It&#8217;s largely a leadership call, though, he said.

It may seem like a minor infraction, but little unprofessional acts &#8212; like eating and smoking in the wrong place while in uniform &#8212; can add up, Cornish said.

Petty Officer 3rd Class Matthew Erickson said he he&#8217;s been in trouble with his boss a couple of times for talking on his cellular phone while in uniform. Though it made him feel like a kid, he said he understands the reason for it.

Navy firefighter Trevor Northam says he hasn&#8217;t noticed too many uniformed sailors walking and talking around the base since leadership started cracking down.

Cell phones in &#8216;civvies&#8217;Even if you&#8217;re not wearing a uniform, text messaging your buddies while walking down the street can be dangerous, Cornish said. No one, active-duty or otherwise, should be talking on their cell phones in crosswalks, he said.

Cellular phone use is also prohibited when walking through any of the security gates.

Cell phones on the roadDriving with a cellular phone is pretty cut and dried &#8212; don&#8217;t do it or you&#8217;ll get a ticket and two points on your license, Cornish said.

And enforcement efforts have been stepped up. About 75 people have gotten a ticket since January, he said.

Still, the Navy isn&#8217;t as strict as the Air Force when it comes to driving and talking, he said.

Uniformed airmen aren&#8217;t supposed to wear a cell phone unless they are conducting official business.

Uniform rules state that one cell phone or pager can be worn on a soldier&#8217;s belt. Although there is no specific rule Army-wide on talking on cell phone while in uniform, individual base commanders have established their own policies.

The Corps policy is currently under review, but for now Marines can use cell phones while in uniform. However, they are forbidden to walk while talking on the phone.