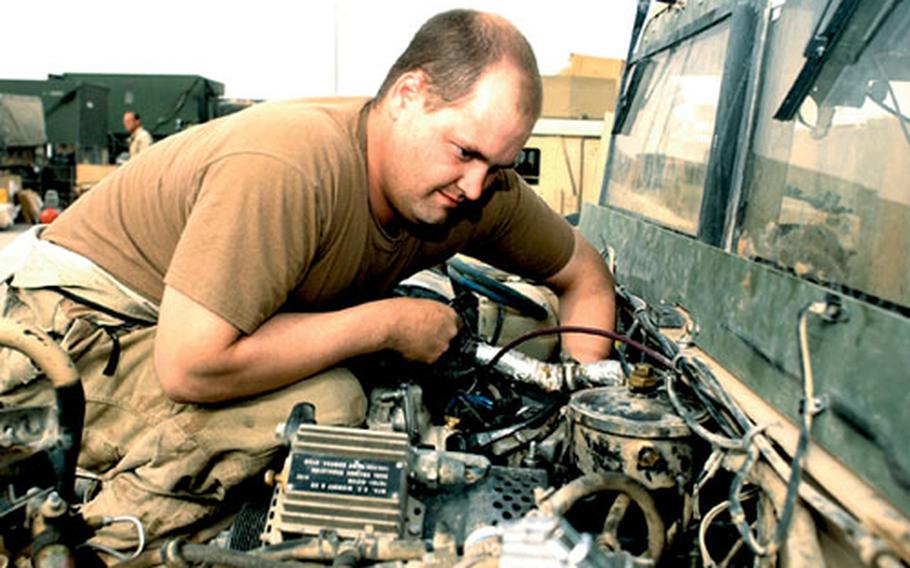 Abu Ghraib prison has been in the news again, with Iraq&#8217;s Ministry of Justice now handling almost all of the duties surrounding the release of prisoners.

That new development jarred the memory for one officer serving at Forward Operating Base Hawk near Baghdad, where release ceremonies are held.

Palani is working at Hawk during a prison release ceremony.

And there appears his former prisoner, newly sprung from Abu Ghraib.

He was thinner (Palani said he thought for the better) and immediately picked out the man who originally nabbed him.

Stranger in these parts

Troops of the 1st Cav&#8217;s 2nd Battalion, 12th Infantry Regiment, near Baghdad, are still telling the story of the Iraqi Texan.

It seems that three months ago, they were asked to talk to Iraqi cops about springing an alcohol distributor from jail.

The guy was an Arab, perhaps Iraqi, but had a U.S. green card.

It seemed the man had left Texas for Iraq hoping to set up shop in a way consistent with the Old West of yesteryear: He&#8217;d bring booze to the parched desert.

So the man rented a fleet of trucks and began hauling liquor, beer or both into the country.

They attacked his convoy and destroyed his cargo and the trucks, too.

When the company that owned the trucks found out, they demanded that the Texan cough up the value of the trucks.

The trucking company then allegedly abducted him.

But using his frontier smarts, the Texan persuaded his captors to let him go.

He told them that he wouldn&#8217;t very darn well git the money if he was all hogtied with them now, could he?

The truckers let the Texan go.

Somehow the truckers found out, and showed up at the Texan&#8217;s house before he could gitty up and go.

There was a ruckus in the yard.

The law showed up and threw all the men in the county jail &#8212; or whatever it is they call it in Iraq.

The Texan&#8217;s wife then asked the soldiers of the 2nd Battalion, 12th Infantry Regiment to get the husband sprung.

The troops who talked to Stars and Stripes weren&#8217;t sure how this all ended up, but they hope he found his way back to the States, where they don&#8217;t mess with Texans.

Your correspondent told a U.S. soldier that the black armor civilians such as security guards and journalists wear makes them look like members of the X-Men.

He has to wear a dome of a helmet, a flak vest, big lace-up boots and sometimes one of those CamelBak water tanks.