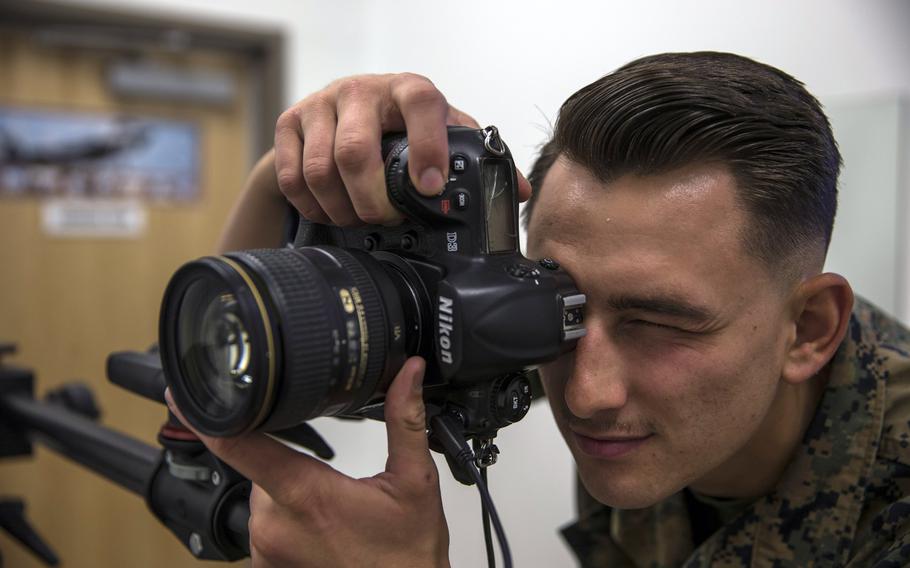 U.S. Marine Corps Lance Cpl. John Hall, a combat photographer, takes a picture in the promotion photo studio at Marine Corps Air Station in Yuma, Ariz., in June 2019. In a move to fight racial and gender bias, photos will no longer be used by promotion boards or in the selection process for opportunities such as training and assignments, the Marine Corps has said. (Isaac D. Martinez/U.S. Marine Corps)

Photos will as of Tuesday no longer be used to select Marines for promotion or assignments, training, education and command opportunities, officials said as the Corps joins a services-wide effort to fight unconscious bias.

In a memo released last week, the Marine Corps noted that only “authorized information can be placed before, requested by, or reviewed by members of a selection board” and photos of Marines were no longer considered authorized.

The move follows Secretary of Defense Mark Esper’s July 14 guidance to all service branches to stop using photographs in promotion boards and selection processes, to help the military to better reflect the U.S.’s diversity in its ranks and ensure “equal opportunity for all who serve.”

Two weeks before Esper’s memo, the Marines said they had no plans to eliminate the photos, which were called a procedural requirement by service Manpower and Reserve Affairs spokeswoman Yvonne Carlock, according to Military.com.

The Marines compose their board with diversity in mind and “each member agrees to the precept which directs that Marines’ race, religion, color, sex (including gender identity), sexual orientation, or national origin will not impact their professional opportunities,” Carlock said.

The Marines are the second service branch to bar the use of photos in the promotion and selections processes. The Army stopped using photos on Aug. 1, days after Esper’s memo.

Marine Corps Commandant Gen. David Berger last month called on the service to “listen, understand, try to empathize, so that we can make adjustments within our service to change the way that some people view … either a conscious bias or an unconscious bias.”

The Navy has set up a task force to address biases in the service, and the Air Force has ordered independent reviews of its record on military discipline and opportunities for Black airmen.

A Marine who has used promotion photos several times said she endorsed the move to stop using pictures.

“Anything that helps eliminate unfair bias is a good thing,” said Sgt. Kirstin Spanu, a communications strategy and operations specialist with the Marine Reserve.

The military began more closely examining its policies on diversity and racial bias after protests flared around the U.S. following the deaths of several African Americans, including George Floyd in Minneapolis and Breonna Taylor in Louisville, Ky., at the hands of law enforcement officials.