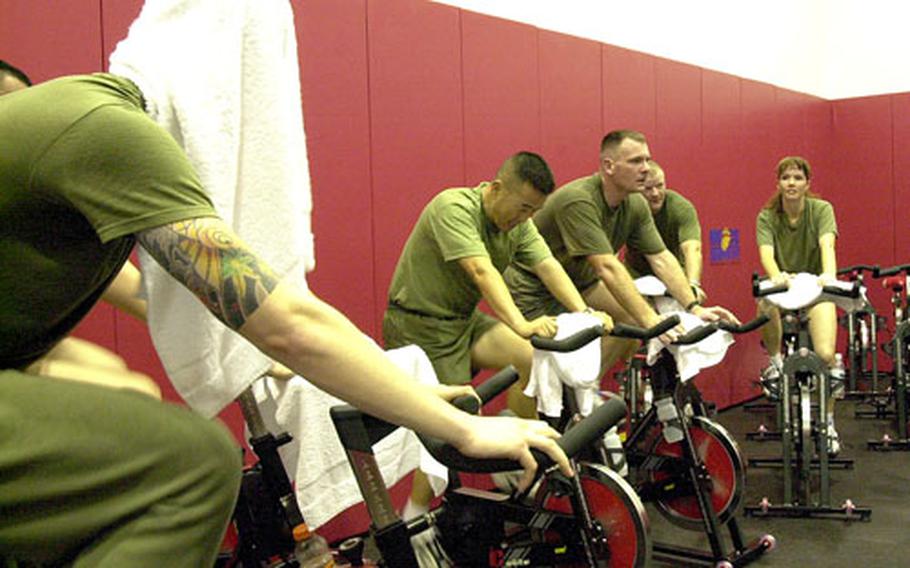 Marines try out the new “spinning” room Friday on the first day of business for the new Gunner’s Gym on Camp Foster, Okinawa. (Fred Zimmerman / S&S)

Marines try out the new “spinning” room Friday on the first day of business for the new Gunner’s Gym on Camp Foster, Okinawa. (Fred Zimmerman / S&S) 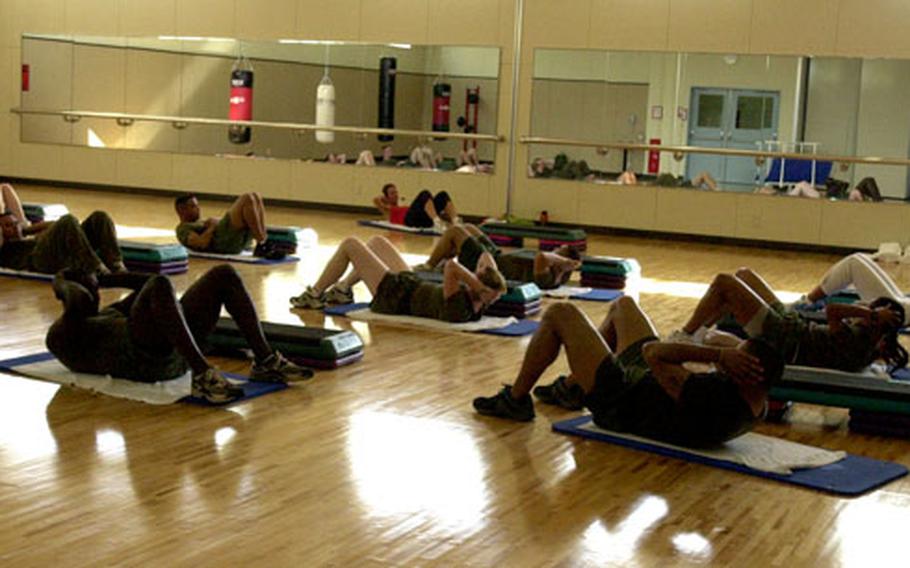 Marine Corps Community Services unveiled its new 54,000-square-foot gym last Friday. The facility, which is next to the Foster Field House, replaces the old gym of the same name, which opened in 1973.

The new and improved Gunner&#8217;s Gym has an 11,000-square-foot weight and cardiovascular room with 105 pieces of new weight equipment and 28 pieces of cardiovascular gear complete with audio and video capabilities, according to MCCS officials. The gym also has a dedicated martial arts room, aerobics room, eight racquetball courts and a cycling room. There is also a second floor basketball/volleyball court, and a centralized gear issue location.

In the lobby there are multiple televisions, as well as a free Internet kiosk with a high-speed wireless connection. The facility also has continual video monitoring capabilities.

At Friday&#8217;s ribbon-cutting ceremony, Brig. Gen. Joseph Medina, Camp S.D. Butler&#8217;s commanding general, said the gyms on Okinawa have come a long way from the ones he knew earlier in his career. He said when he was stationed on Camp Schwab from 1980 to 1981, two squad bays made up the gym there. He added that a few years later in 1988, the gym on Camp Hansen was even better &#8212; four squad bays.

Medina said there is no comparison between those old facilities and the new state-of-the-art gym. He also said the old Gunner&#8217;s Gym had about 15,000 patrons a month, but they expect a lot more at the new building.

Camp Foster&#8217;s camp commander, Col. Adrienne Fraser Darling, said during the ceremony that of all the new buildings going up on Camp Foster, the two she was asked about most were the Macaroni Grill restaurant, which is still being built, and Gunner&#8217;s Gym. &#8220;Marines like to eat, and we like to work out,&#8221; she joked. She said a nice new facility is something Marines aren&#8217;t quite used to. &#8220;For the first time in my 25 years [of service], we have something that rivals what the Air Force has,&#8221; she said.