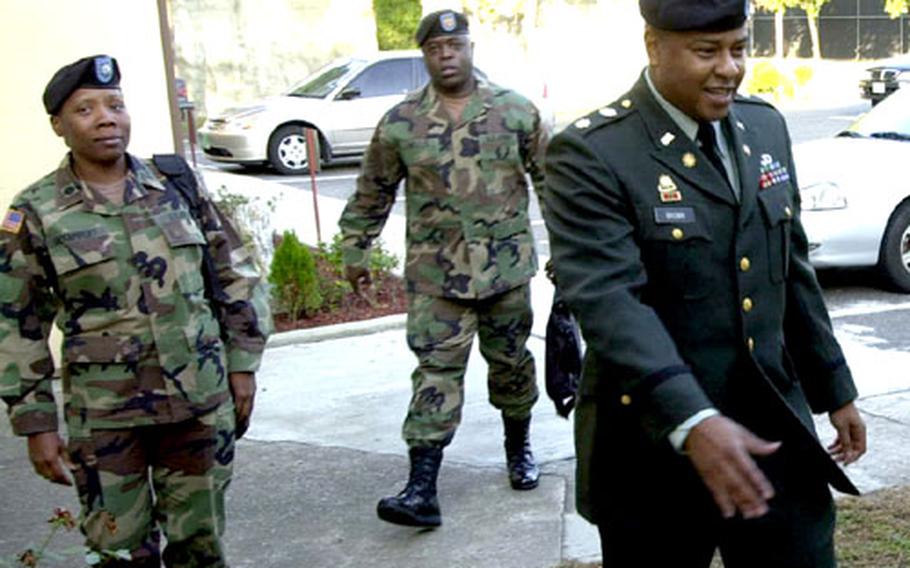 CAMP HENRY, South Korea &#8212; A U.S. Army major found guilty of raping one young enlisted servicemember and maintaining a sexual relationship with another was sentenced late Tuesday to four years in prison.

A jury of five officers &#8212; four male and one female &#8212; found Maj. Jeffrey L. Brown guilty of rape and fraternization earlier in the day, the second day of his two-day court martial.

The jurors, however, found him innocent of sodomy and stripped the words &#8220;sexual relations and sodomy&#8221; from one of the two specifications of fraternization.

Brown also was found guilty of violating a lawful general order for breaking the military curfew in June. He is to forfeit all pay and allowances and be dismissed from the Army as part of the sentence.

His civilian lawyer, Gary Myers, who co-counseled with Capt. Pia Rogers, said he was unhappy with the outcome.

&#8220;I believe this was a gross insufficiency of evidence to convict and that an appeal has a high probability of prevailing,&#8221; Myers said after the trial.

Two women testified this week that they spent several hours drinking with Brown before returning to his apartment that night. One woman stated she awoke to Brown having sex with her and the other testified that she had consensual sex with the major later the same night. That woman said her relationship with the major lasted several months and the story came to light when Army criminal investigators queried her earlier this year.

Brown maintained his innocence during an unsworn statement to the court before hearing the sentence. He said he only offered the women &#8212; soldiers from his command &#8212; a place to stay when he spotted them wandering drunk on the street near his apartment.

He said the months-long relationship with one of the women was professional, not sexual, in nature.

He said the soldier often visited his office to talk about family problems and the difficulty of living overseas for the first time &#8212; &#8220;the things that young soldiers face being away from home.&#8221;

During closing arguments much earlier in the day, prosecutor Capt. Trevor Barna said inconsistent statements from the women during testimony could be blamed on the time between the incident and the court-martial.

But, he stressed, one woman did remember waking up to find Brown having sex with her.

He also stressed how difficult it must have been for the young women to testify about the details in the open court.

Barna argued the reason one woman maintained a relationship with the major &#8212; even after she witnessed him raping her friend &#8212; was because he was an older man who showered her with attention and gifts and made her feel good about herself.

The fact that one woman claimed to have been fondled by Brown, found him on top of her drunken, unconscious friend a few minutes later, and then had consensual sex with him the same night was incredulous, he said.

He described the woman as a manipulator in the case.

Barna countered that the idea the women came together to create &#8220;some grand conspiracy&#8221; is ridiculous.

This case didn&#8217;t involve a violent crime, Barna said, referring to the woman&#8217;s testimony on the first day of trial that she had been gang-raped when she was 12. There was no masked man wielding a knife.

But, he argued, Brown did use a weapon.

Some of Brown&#8217;s last statements to the jurors involved his family.