A squad of Iraqi soldiers clears a building during an exercise at the Besmaya Training Center. Housed at a former Republican Guard complex, the center includes 26 weapons ranges, M1A1 tank training and a bomb disposal school. U.S. advisers as a model, but questions remain about the center&#39;s future as the U.S. pulls back. (Michael Gisick / S&S)

A squad of Iraqi soldiers clears a building during an exercise at the Besmaya Training Center. Housed at a former Republican Guard complex, the center includes 26 weapons ranges, M1A1 tank training and a bomb disposal school. U.S. advisers as a model, but questions remain about the center&#39;s future as the U.S. pulls back. (Michael Gisick / S&S) 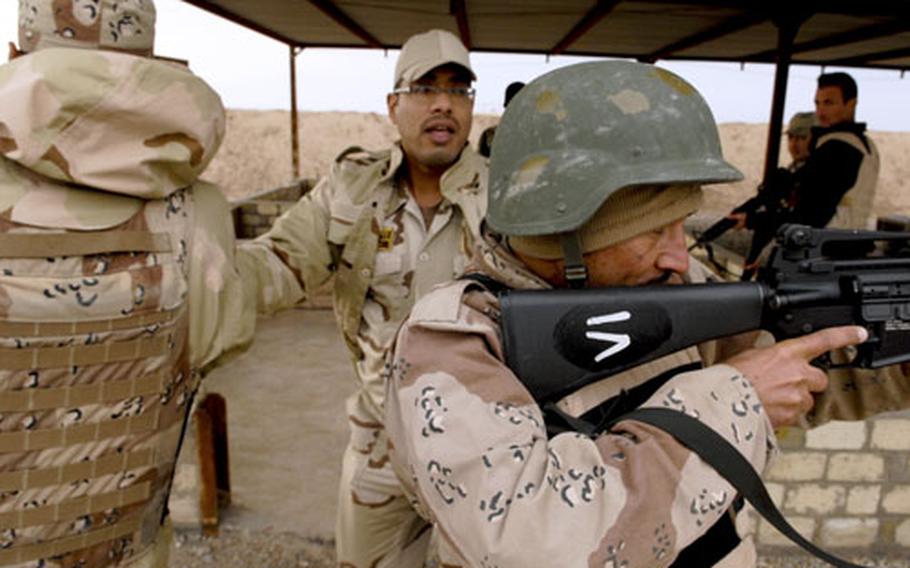 Arif Akil Salma, an Iraqi Army trainer, leads a course in building clearance at the Besmaya Training Center. Much of the training at the American-funded center is led by an Iraqi cadre of some 800 soldiers. Sixty civilian contractors and 21 American military advisers also work at the center. (Michael Gisick / S&S) Mundir Mohammed, a bomb disposal specialist from the 11th Iraqi Army Division, smiles from within an armored suit during training at the Besmaya bomb disposal school, which includes Iraq&#39;s only facility to repair damaged bomb-disposal robots. Mohammed says his mother wishes he had a different job. (Michael Gisick / S&S) BESMAYA TRAINING CENTER, Iraq &#8212; In many ways, this collection of dusty ranges and well-tended barracks south of Baghdad represents the culmination of the U.S. military&#8217;s years-long effort to train the Iraqi army.

Roughly 75 percent of Iraqi units have been through training here, much of which is now led by a cadre of 800 Iraqi soldiers. Specialized instruction includes an M1A1 tank course and a bomb disposal school.

As the U.S. military contemplates its exit from Iraq, Baghdad-based officers involved in the training effort say the Iraqis are nearly ready to take over the $24 million a year program in Besmaya and others like it.

The Iraqis, however, disagree.

For Abbas, an outspoken officer who has commanded here since the center opened in 2006, the problems boil down to a reluctance by &#8220;old-style minds&#8221; at higher echelons of the Iraqi military to embrace the American-style training, which focuses on realism and repetition as opposed to the lecture-heavy model traditionally conducted in Iraq.

Even persuading the Iraqi Ministry of Defense to release ammunition to units coming to train at Besmaya has been a continual problem requiring U.S. intervention, Iraqi and U.S. officers say.

Beyond the ingrained attitudes of officers who came of age during a decade of sanctions that limited Iraq&#8217;s ability to repair or replace its military hardware, questions remain about what kind of training the new Iraqi army can afford once the Americans stop paying the bills.

A single one of the computer-operated pop-up targets at Besmaya&#8217;s small arms ranges, which are maintained by a group of 60 U.S. contractors, costs about $30,000.

What Iraqi officers describe as a total lack of logistical support from their own government &#8212; and a lack of high-level interest &#8212; has fed the view that, without continued U.S. help, the training will collapse. It has also opened a gulf between the views of the American advisers, who believe the Iraqis are nearly self-sufficient, and the Iraqis themselves, who say they&#8217;re not even close.

With nearly two years remaining until the U.S. is scheduled to leave Iraq completely, senior American military advisers play down those concerns. The notoriously bad Iraqi logistical system has only recently become a focus, they say, and the fact that Iraqi commanders are taking entire units out of sector to send them to training shows that the Iraqis have bought into the concept.

Besides, American officials say, the goal is not to leave behind a replica of American military training but a sustainable model that works for Iraq.

For Abbas, who claims to have been the first officer to join the new Iraqi army following the U.S. invasion, the future also remains uncertain.

Repeatedly passed over for promotion, Abbas produced a sheaf of orders, one directly from the minister of defense, relieving him of his command in Besmaya. The orders were rescinded in November, he said, after what he described as &#8220;something like an act of God.&#8221;

But while American advisers say Abbas deserves much of the credit for the successes at Besmaya, he has fallen far from the graces of his own superiors, reflecting widespread division within the Iraqi military.

Abbas himself, who blames his estrangement on his refusal to pay bribes, puts it more bluntly.