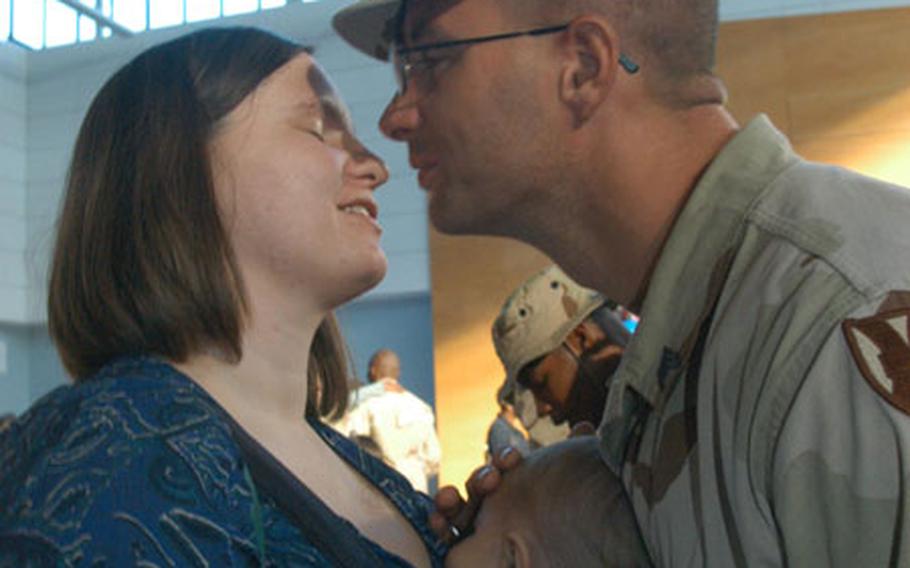 After seven-months trucking through the desert, Staff Sgt. Donald Simmons leans over his 8-month-old daughter, Hannah, to kiss his wife, Petra, Thursday at Coleman Barracks in Mannheim. (Rick Scavetta / S&S)

The soldiers, part of the 21st Theater Support Command, deployed to Kuwait in mid-March and moved north into Iraq in early April. Since then, they&#8217;ve helped keep supply lines running, logging millions of miles through hostile country.

The first mission for 2nd Lt. Jenny Pittman, 23, of Atlanta, was on March 25, when a 48-truck convoy traveled north into Iraq, just behind the front lines, to a truckstop named Cedar. By April 6, the 68th Transportation Company operated from Cedar, not far from Tallil air base.

Over the past few months, the truckers moved units and supplies as far as Mosul in northern Iraq, and just about every city with a U.S. troop concentration.

While enemy fighters would take a few shots at passing convoys, none of the truckers faced serious ambushes, Pittman said. Speed was key, she said.

Before they were released from duty Thursday evening, the troops were honored in a short ceremony held in the base gym.

&#8220;We are extremely fortunate to be bringing back every soldier we deployed,&#8221; said Lt. Col. K.M. Granfield, commander of the 28th Transportation Battalion. Granfield kept his comments short, knowing that the troops were not interested in his long-winded speech when their families were waiting nearby.

But he did quote a speech from Gen. George Patton, which he slightly modified for the occasion.

Finally, with words, &#8220;fall out,&#8221; wives clutching children, girlfriends and fellow troops stormed from the bleachers across the gym, meshing with the desert camouflaged-troops.

Yells of joy mixed with tears of relief as families embraced.

The troops will have the next few days off before starting the process of reintegration into the Army in Europe. They&#8217;ll get three weeks&#8217; vacation, then return to their normal job of delivering mail.