A Japanese worker separates garbage at the Recycling and Incinerator Plant on Yokota Air Base, Japan. (Christopher B. Stoltz / S&S)

A Japanese worker separates garbage at the Recycling and Incinerator Plant on Yokota Air Base, Japan. (Christopher B. Stoltz / S&S) 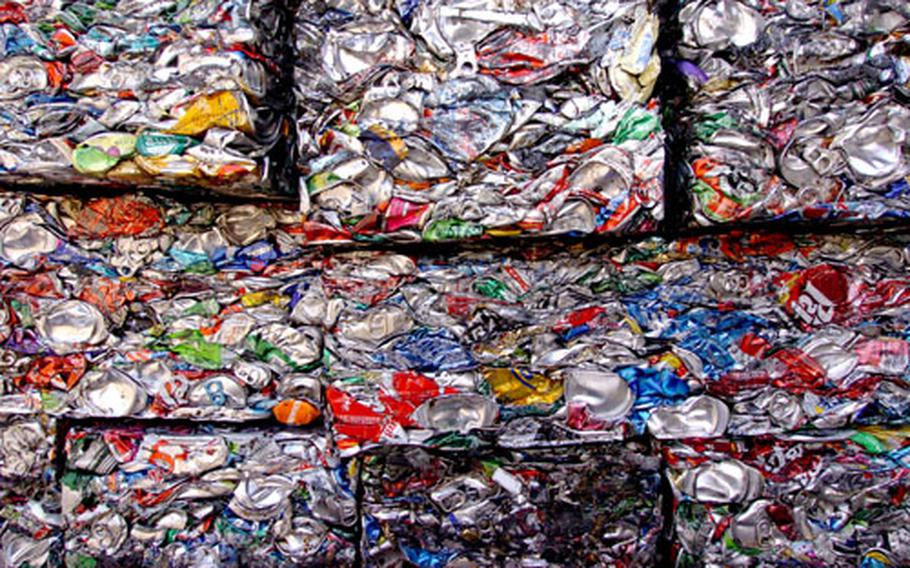 Aluminum and metal cans are crushed into cubes at the Recycling and Incinerator Plant on Yokota Air Base, Japan. In 2005, the facility handled more than 9,000 tons of waste generated by base servicemembers, civilians and their families. (Christopher B. Stoltz / S&S)

U.S. bases are no exception, but rules for each vary.

At Sasebo Naval Base, for example, people living in town can bring garbage on base, helping a few thousand people avoid the roughly 14 categories of trash separation required by Sasebo city. It&#8217;s the only base where that is permitted.

But it&#8217;s a no-no at other bases in Japan, and violations can come with penalties.

Bases have rules against bringing garbage on base to hold down costs, and local cities will take trash so long as it&#8217;s properly sorted. But with the multitudes of categories and various collection days in cities, that can be onerous.

&#8220;It was quite extensive,&#8221; he said, recalling his own experience separating glass by color and paper by type when he lived off base.

Sasebo Naval BaseBase officials realize they have a good thing going. But if the volume of garbage gets too big, they may have to rethink accepting off-base garbage.

Waste officials see it as a quality-of-life issue. More than half the people assigned to Sasebo live off base.

The base also offers a perk to on-base residents &#8212; recycling is done for them by a contractor who separates trash after pickup.

It costs a bit more, but it&#8217;s easier than dealing with enforcement, Whittier said.

The base also earns money from recyclables, although mostly from scrap metal from the ship repair facility. That income helps fund the garbage-disposal system.

Yokota Air BaseYokota officials want to make one thing clear to nonresidents: The base is not the local community trash receptacle.

A bag or two of household garbage from off base quickly adds up, costing the base more than $450,000 a year, according to Yuki Inoue of the 374th Civil Engineer Squadron&#8217;s environmental flight.

&#8220;Currently, going over the weight limits is a manageable problem, [but] the limit is set based on historical records, and if the tonnage is decreased every year, the base will save money,&#8221; she said.

Off-base residents also receive utility allowances for trash disposal, so by throwing it out on base they in effect are costing the base twice as much to get rid of it.

Inoue says officials have ways to trace off-base trash back to individuals, particularly if it contains personal information. Those who get caught must remove their trash immediately from base dumpsters. They also could face administrative discipline.

On base, Yokota has a mandatory recycling program, with residents and employees required to conduct &#8220;minimum sorting&#8221; of garbage. That reduces operating costs at the recycling and incinerator plant.

Yokosuka Naval BaseYokosuka musters up the stiffest penalties for bringing off-base trash on base &#8212; up to 30 days&#8217; suspension of on-base driving privileges, according to base spokesman Phil Molter.

And anyone &#8212; servicemembers, civilians or Japanese employees &#8212; can be punished.

The base used to accept off-base trash, but big bins set aside for that were often heaped with more than just household garbage.

So the bins disappeared and off-base residents have had to learn their cities&#8217; rules.

On base, contractors separate trash and recyclables for residents after pickup. There also are recycling bins on base for newspaper, cardboard, cans and bottles.

Station leaders now are establishing an enforcement system to give the order bite.

&#8220;Every time they empty their trash they charge the government,&#8221; said Ryan Leming, who runs Iwakuni&#8217;s solid waste, recycling and landfill operations.

Once the punishments for violations are set a monitoring and enforcement program will begin. Because most residential garbage sites are monitored or are under lock and key, most illegal trash is found in a few isolated sites, Leming said.

But like many bases, Iwakuni welcomes on- and off-base recyclables &#8212; except bottles &#8212; at its recycling center and will soon install special recycling collection boxes around base, Leming said.

The base also is among the few with a commercial bailer, which can pack paper, cardboard and soft plastics into resellable bales more cost-effectively.

The base also has its own landfill. It was initially to be filled by about 2000, but recycling efforts have extended that life as much as 30 years, Leming said.

Officials haven&#8217;t had to crack down on off-base violators or start searching cars for stashed trash, but if the volume of trash were to increase the base would take note, he said.

A new recycling center may be helping stave off a crackdown.

But people on base still have an important role to play &#8212; bringing their recyclables to the center and properly separating burnable and nonburnable trash at home.

Laughter said the base&#8217;s trash contractor will rip open bags to look for recyclables in the burnable trash. If he finds them, the contract cost could go up because it requires more work. If he misses something, he gets fined when the inspectors at the dump see it, and that, too, could cost the base more during contract re-negotiations.

Camp ZamaSeveral years ago the base commander banned off-base trash. Vehicle checks in the wake of Sept. 11, 2001, showed the extent of the problem, and violators since have been refused base entrance, said Butch Malone, a Directorate of Public Works, Operations and Maintenance Division chief at U.S. Army Garrison- Japan.

That pretty much solved the off-base problem. But then a problem on base was underscored when improperly sorted trash caused about $300,000 worth of damage to the base incinerator a few years ago.

About a third of the trash was improperly sorted, allowing things such as propane tanks to end up being burned, Malone said. So now a contractor picks up trash and sorts items afterward.

Still, residents are asked to continue separating trash because the the less the contractor has to do, the cheaper future contracts will be.

Vince Little contributed to this story.

A place for everything ...

&#8226;The following guidelines for Yokosuka City are an example of how garbage collection works in Japanese cities:

&#8226;Plastic containers with the recycle mark, which looks like a square with a Japanese word in the middle, can be recycled. Plastic containers and packaging including food trays, cartons, lids, cups, plastic bottles, plastic bags, Styrofoam, nets and tubes. All containers need to be emptied and rinsed.

&#8226;Large items such as furniture and appliances are collected by cities for a fee. Some bases will accept these items. Check the housing office for details.

&#8226;Air conditioners, televisions, refrigerators and washing machines need to be collected by the retail shops for recycling fees based on the Electric Appliance Recycling Law. These items cannot be collected as large-size garbage by cities.

For more information about trash collection or other off-base housing needs, contact your housing office.