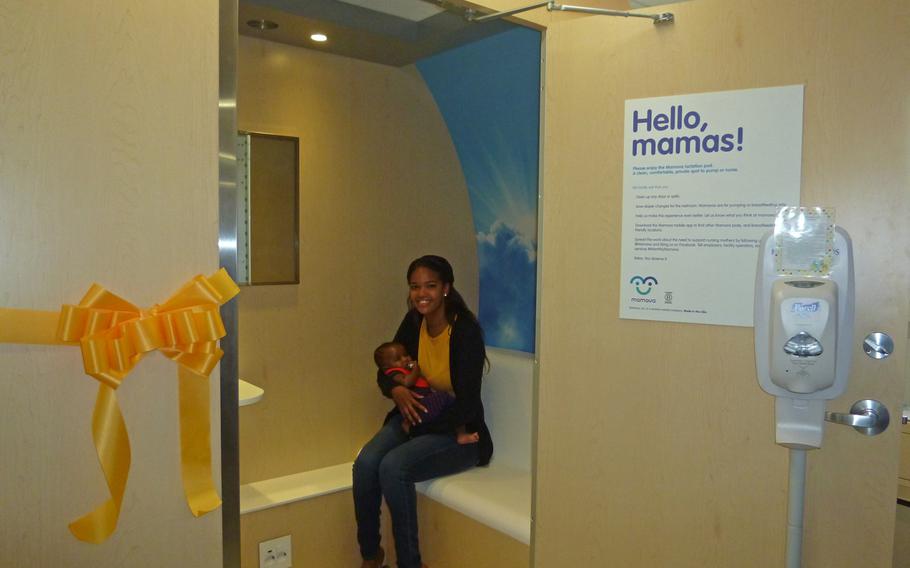 Cpt. Amatul Davis, labor and delivery nurse at Landstuhl Regional Medical Center holds her son Sept. 15, 2016, in the new Lactation Support Pod following a ribbon cutting ceremony. ''I work here and I also delivered my son here,'' Davis said. ''This new space is great because it is right in the middle of the hospital.'' (Courtesy of Landstuhl Regional Medical Center)

Cpt. Amatul Davis, labor and delivery nurse at Landstuhl Regional Medical Center holds her son Sept. 15, 2016, in the new Lactation Support Pod following a ribbon cutting ceremony. ''I work here and I also delivered my son here,'' Davis said. ''This new space is great because it is right in the middle of the hospital.'' (Courtesy of Landstuhl Regional Medical Center) 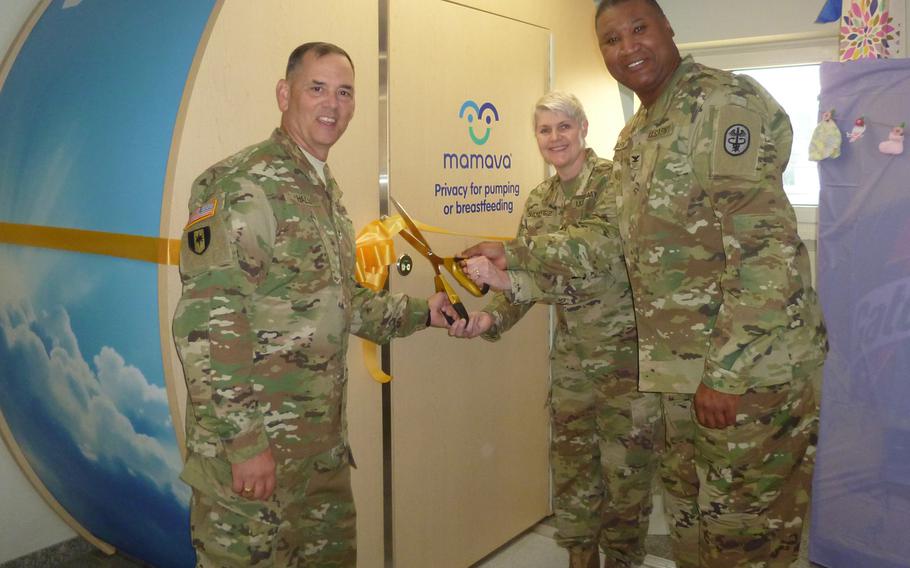 KAISERSLAUTERN, Germany — It’s a stand-alone, 4-by-8-foot pod that resembles a photo booth. The Durham Bulls have one, and now so does Landstuhl Regional Medical Center.

LRMC earlier this month unveiled its first “lactation support pod” — the second at a U.S. military hospital and the first in Europe, hospital officials said — to give nursing mothers privacy while breast-feeding or expressing milk.

The module complements two mothers’ rooms on each end of the facility where nursing mothers can also have privacy.

Madigan Army Medical Center in Washington state announced in January that it had installed four breast-feeding and pumping pods.

The Army last year updated its breast-feeding and lactation policy, prohibiting the use of restrooms as lactation spaces and giving soldiers adequate breaks for pumping milk. In January, the Army’s medical command instructed its facilities to provide “a clean, comfortable space for the purpose of milk expression,” equipped with an electrical outlet and seating.

The pods, made by the Vermont-based startup Mamava, are turning up across the United States at airports, stadiums, convention centers, hospitals and schools, according to the company.

Durham Bulls Athletic Park in North Carolina announced this summer that it had installed a private and quiet space for mothers to nurse or pump in the stadium’s third-base concourse. Earlier this month, Miami International Airport unveiled eight of the 32-square-foot pods spread throughout its concourses.

The cost for LRMC’s lactation pod was nearly $17,000, including installation, hospital officials said. The pod — with seating to accommodate the nursing mother and a partner or other children — also includes a collapsible table, a power supply for a breast pump, and room for a diaper bag or small stroller. It can be secured from the inside.

As the pods become more widespread, some women have questioned their need, concerned that it promotes the message that nursing mothers should be hidden away.

“On the face of it, it does seem downright rude to suggest that breast-feeding mothers need to go sit in what one person described as an oversized tin can,” wrote Canadian mother and blogger Rebecca Cuneo Keenan last year.

A few women on Madigan’s Facebook page echoed those concerns. But most commenters expressed gratitude for the pods, which they said filled a need for privacy.

Hospital officials at LRMC, meanwhile, emphasized that nursing mothers aren’t obligated to use the pod. “Of course, moms can breastfeed in all federal buildings, but we are excited to also offer moms a variety of options to meet their needs,” said Beth Eastman, a LRMC lactation consultant.