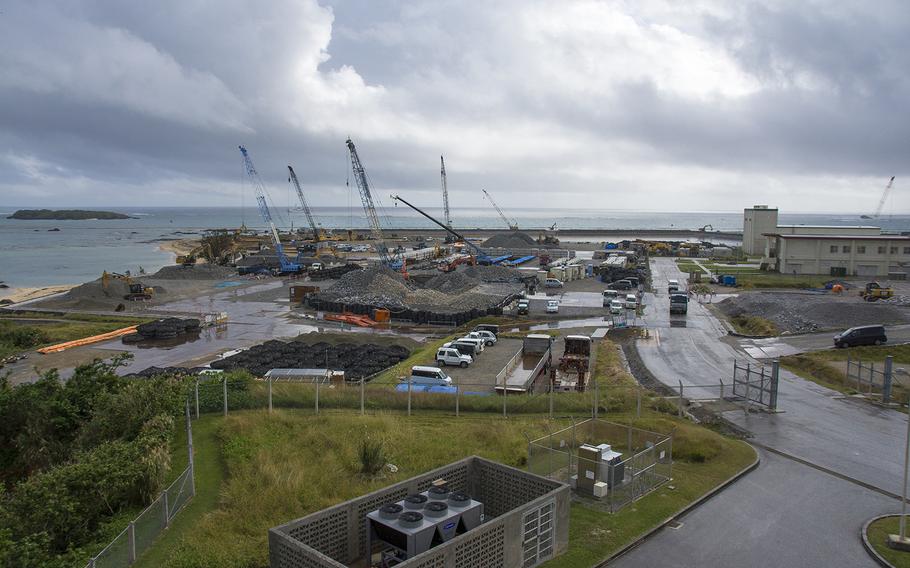 Construction began before noon at Camp Schwab — a Marine Base in Henoko — as workers pumped water out of a walled-off footprint of the runway in Oura Bay and began to replace it with soil, Okinawa Defense Bureau spokesman Masashi Katsuren told Stars and Stripes.

“We are pumping the water out and reclaiming with dirt at the same time,” Katsuren said. “Of course we are following the prefectural guidance on red soil spill prevention to protect the environment.”

Futenma is in a densely populated urban area in the central part of the island. Relocating air operations to the remote northern coast is the latest move by the U.S.-Japan alliance to consolidate vast U.S. military holdings on the island. It is also seen as a safer and less intrusive alternative.

A small but passionate protest movement — backed by popular support — has stood fervently opposed to the relocation of Marine air operations within the prefecture.

Nago police said that while there were more protesters outside Schwab’s front gate than usual, they declined to estimate the number. No arrests had been made as of Friday evening.

Past Okinawan governors and local politicians have tried everything in their power to derail the project, but Tokyo and its allies in Washington have remained steadfast that it is the “only solution.”

While the landfill work has been years in the making and is a significant step toward completing the runway, Katsuren said the .02 square-mile section being filled, called “area 2-1,” represents only 4 percent of the .6 square-mile reclamation project.

“We cannot comment when the entire reclamation will be completed at this moment,” Katsuren said.

The meetings in Tokyo came a day after the prefectural government sent a letter of administrative guidance to Okinawa Defense Bureau, calling the decision to proceed with landfill work “illegal” and “not permitted.”

Okinawa asked the bureau to halt the construction immediately. However, the guidance was not legally binding.

“I have demanded a halt to the reclamation work at Henoko; however, I am furious about how the government disregarded Okinawa and is forcing [it],” he said, according to a statement released by his office.

“Many believe in Tokyo that the reclamation process will make us give up but this is leading to even more local resistance,” he added. “They should know, the more they force, our anger will fuel up even more.”

The relocation saga is a long one, beginning in earnest in 1995 as furor erupted over the kidnapping and rape of an Okinawan girl by two Marines and a Navy corpsman. Locals demanded that Futenma be closed because of the safety risk. The plan to build the runway at Schwab was decided during bilateral negotiations in 2006.

The issue ignited a small but vigorous protest movement that has been working to block the project and move Marine air operations totally off the island.