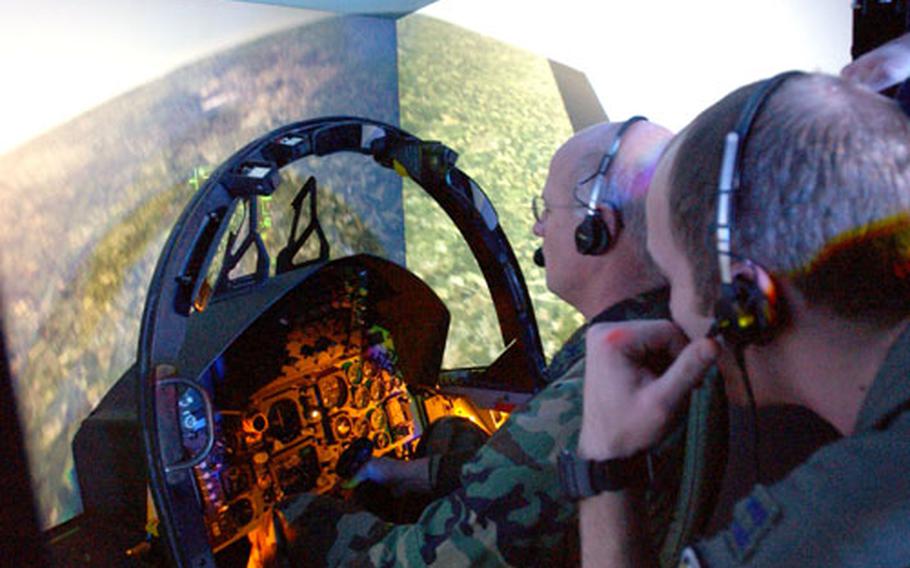 A 48th Fighter Wing member tries out the new networked flight simulator at RAF Lakenheath at the official ribbon cutting for the equipment. Lakenheath is the fifth Air Force base to have the simulator, designed by Boeing Co. (Courtesy of U.S. Air Force)

RAF Lakenheath has become the fifth base in the Air Force to receive a new model of a high-tech F-15 &#8220;mission training center&#8221; made by Boeing Co., the aircraft manufacturer announced last month.

The new equipment will allow pilots in flight simulators at different locations to train together simultaneously from thousands of miles apart &#8212; a step forward in the quality and flexibility of flight trainers, Maj. Marc LaRue, from Lakenheath&#8217;s 493rd Fighter Squadron, said.

Following three years of development, the new simulator (actually two mock cockpits and several controllers&#8217; stations) opened for operation in January and has since been used by Lakenheath pilots, LaRue said.

The flight simulator is part of an Air Force program of &#8220;distributed mission operations,&#8221; a broad training scheme to allow forces to simulate large-scale training missions across continents without leaving their home bases.

That kind of networking capability isn&#8217;t yet running on the Lakenheath system, but should be in place by the spring, LaRue said.

In the meantime, local pilots have been using the new simulator for other training purposes, which allows them to practice more intercepts than if they were actually in a jet, he said. It also comes with stations to allow pilots to fly opposing jets in the simulations, enabling F-15 pilots to practice against live opponents and not computerized intelligence.

The new simulator joins those at a small group of existing terminals at Elgin Air Force Base in Florida, Langley Air Force Base in Virginia, Elmendorf Air Force Base in Alaska and Kadena Air Base in Japan, according to information from Boeing. It also can be linked to other training simulators, as well as command and control headquarters, such as offices at U.S. Air Forces in Europe, allowing pilots to take part in large-scale virtual operations, LaRue said.