Medical staff from the USS Kitty Hawk treat a long row of simulated casualties in the main hangar bay. Without port calls, the trip home has been full of exercises and drills. (Joseph Giordono / S&S)

Medical staff from the USS Kitty Hawk treat a long row of simulated casualties in the main hangar bay. Without port calls, the trip home has been full of exercises and drills. (Joseph Giordono / S&S) 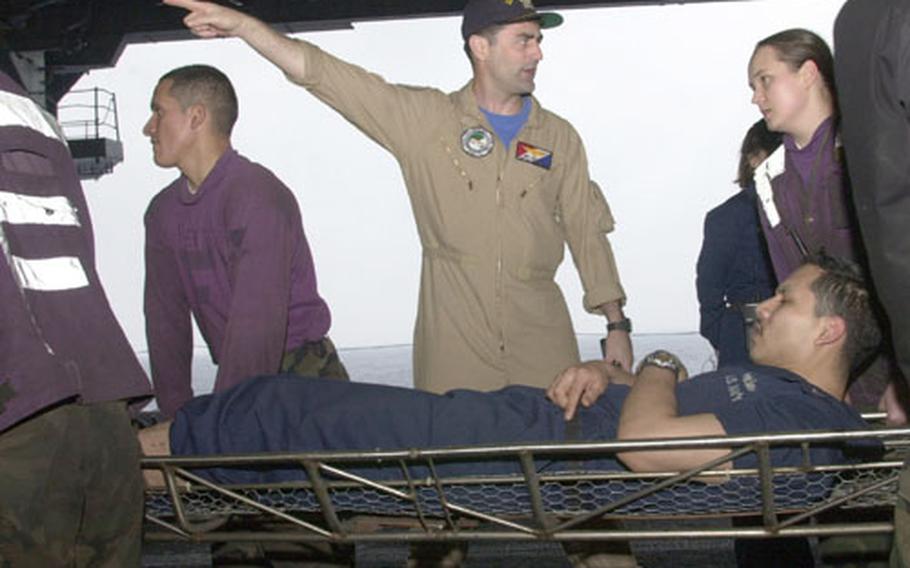 Twice during the deployment, which dispatched the Kitty Hawk crew to the Persian Gulf and is scheduled to end Tuesday, the crew held steel beach picnics, a rare day off from operations &#8212; and the only time a seafaring sailor is allowed a brew or two.

On Saturday, as they steamed for home, crewmembers marked their 100th day at sea. And in that time, even as it passed some of the Pacific&#8217;s most enticing locales, the ship did not make a port call.

Instead, Navy officials say, the necessities of war &#8212; and a decision to speed home &#8212; kept the crew aboard for the entire cruise. While the Kitty Hawk has been away, the USS Carl Vinson patrolled its turf.

Instead of port calls, the sailors&#8217; last weeks on board the ship have been full of drills: mass-casualty drills in the hangar bay; &#8220;quick-draw&#8221; drills for close-in defense teams; general-quarters drills for the whole crew.

In the last 24 hours before getting home, the crew will be seized by what&#8217;s known as Channel Fever &#8212; the frustration of being &#8220;in the channel&#8221; of home port but being stuck on the ship as it slowly lumbers toward pierside.

Kitty Hawk officials hope to offer a few distractions, including an all-night karaoke party in the hangar bay.

The ship also has a full-time, on-board Morale, Welfare and Recreation director responsible for planning outings and events once the sailors hit shore. For the ride home, MWR sent out several extra officials to advertise what they have planned for sailors in Yokosuka.

There are trips to a half-dozen concerts, beach barbeques, a salsa party. There are free trips to Tokyo Disneyland, Universal Studios and the Fujikyu Highlands theme park.

It&#8217;s all an effort to keep sailors from hitting the pier and immediately hitting the bars.

But for some Kitty Hawk sailors, a return to Yokosuka won&#8217;t necessarily mean a return to freedom.

Strict liberty rules will be enforced for all sailors who have a rank of E-3 or below. They will have to earn a liberty card, entitling them to leave the ship and head off base. Kitty Hawk officials are expected to address the entire crew sometime before the ship arrives, spelling out the exact policy.