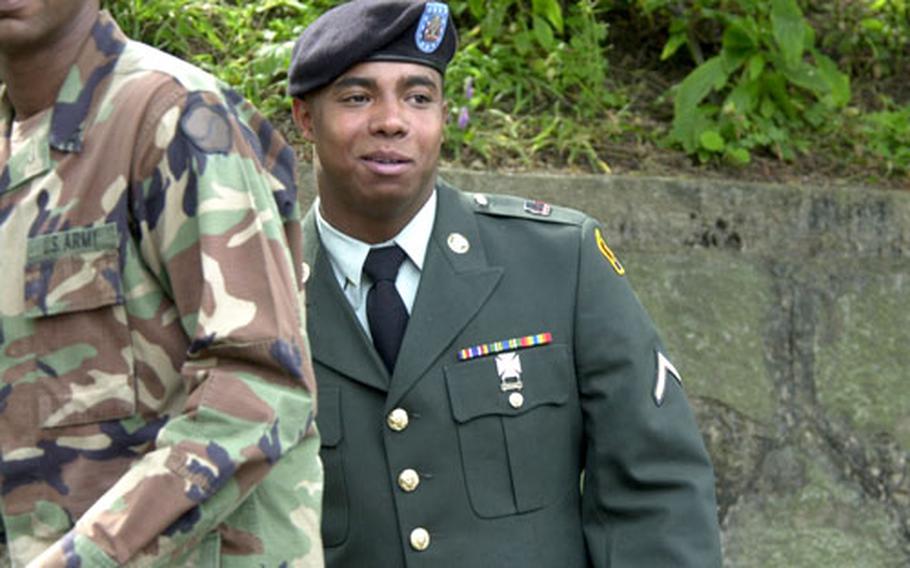 Pvt. Keith F. Clarke takes a break outside the courtroom Thursday at Yongsan Garrison, South Korea. Clarke was sentenced in a court-martial to one year in prison, forfeiture of $882 a month, reduction to E-1 and a bad conduct discharge for totaling a vehicle during a late-night joy ride and for stealing and using a fellow soldier’s Visa check card. (T.D. Flack / S&S)

YONGSAN GARRISON, South Korea &#8212; A soldier was sentenced Thursday to serve time in prison and was given a bad-conduct discharge for destroying a vehicle during a late-night joy ride and for stealing and using a fellow soldier&#8217;s check card.

He also pleaded guilty to stealing a Visa check card from a fellow soldier in mid-May. Charges of conspiracy and obstruction of justice were dismissed.

Under a pre-trial agreement, Clarke will serve no longer than nine months in prison in exchange for his guilty plea. He&#8217;ll also be reduced from his E-2 rank to E-1 and lose $822 a month from his basic pay.

Clarke had opted to be tried by Col. Patrick J. Parrish, chief judge for the 6th Judicial Court in Seoul.

Clarke said he was walking on Camp Coiner at about 10 p.m. July 3 when he used a brick to smash an office window, cutting himself in the process. He left blood spatters across the office before discovering keys to the truck and leaving to find something to eat.

He found two of his friends, Spc. Derek A. Jones and Spc. Rebecca R. Williamson, and offered them a ride to the bowling alley to eat. While speeding back toward his barracks in the rain, Clarke said, he lost control of the truck and it smashed into a guardrail. The $13,000 vehicle was a total loss and damages to the guardrail were more than $7,700, according to court documents.

Clarke fled the scene, he said.

On July 6, he was summoned to the Army Criminal Investigative Division. He admitted he lied to investigators to keep his friends from trouble.

Jones faces a court-martial in November in connection with the case; Williamson received nonjudicial punishment, according to military officials.

In the May incident, Clarke told the judge he was in the Underground Club on Yongsan when he found a wallet. Parrish asked why he didn&#8217;t turn it in to club management.

Clarke used the Visa check card, which belonged to an Army staff sergeant, to buy drinks for friends in the club. He spent about $50 on drinks that night, according to the charges.

During an unsworn statement, Clarke pleaded with Parrish to allow him to stay in the Army. He said his mother is alone in raising his two siblings &#8212; a brother and a sister &#8212; in Brooklyn, N.Y., and he needed to continue helping them financially. He also wanted to be a good role model.

Prosecutor Capt. J.P. Leary, who co-counseled with Capt. Rochelle Howard, argued for the maximum punishment, &#8220;When do we stop mentoring and start punishing&#8221; young soldiers who get in trouble, he asked the court.