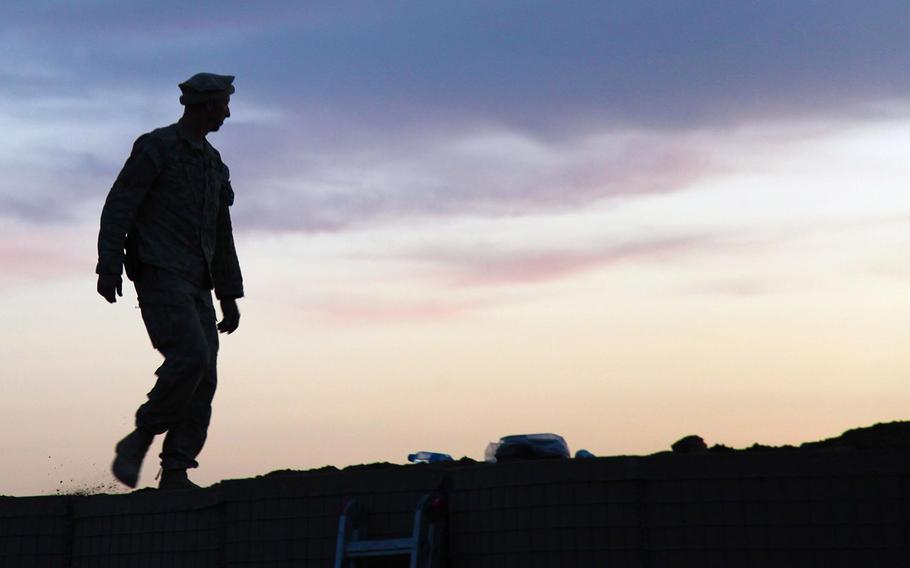 In a 2011 file photo, a U.S. soldier inspects defensive barriers in the Shorabak district of Kandahar province. The area has long been a stronghold and traditional homeland for the Taliban. (DOD)

The announcement of what U.S. spokesman Gen. Wilson Shoffner called “one of the largest joint ground assault operations we have ever conducted in Afghanistan” serves as a reminder that al-Qaida remains a threat in this country despite 14 years of war against the organization that staged the 9/11 attacks.

The operation took place at a time when President Barack Obama is considering a military recommendation to suspend plans to withdraw most of the 9,800 U.S. troops by the end of next year. The top U.S. commander has warned Afghan forces are incapable of defending the country on their own.

In the latest operation, which began Wednesday, American aircraft conducted 63 airstrikes as a force of more than 200 Afghan and American troops attacked two sites, one said to be a “well-established” training camp of roughly 1 square mile, and another area of 30 square miles, according to a statement released by U.S. Forces-Afghanistan.

The targeted areas were in Shorabak district, Kandahar province, located along the Pakistan border. The area has long been a stronghold and traditional homeland for the Taliban, whose support for al-Qaida led to the American invasion after the terrorist attacks on Sept. 11, 2001.

Officials did not elaborate on how al-Qaida could still have such significant bases of operations in Afghanistan after almost 15 years of continuous American and NATO-led military operations. In 2009, then-National Security Adviser Gen. James Jones said there were fewer than 100 al-Qaida fighters left in Afghanistan.

Six years later, however, analysts are saying al-Qaida is far from beaten.

“Al-Qaida’s presence in Afghanistan has certainly been weakened and degraded, but it’s not gone,” said Michael Kugelman, a senior associate at the Woodrow Wilson International Center for Scholars. “Still, given that we’ve been told repeatedly that the al-Qaida sanctuaries have been eliminated, it is quite striking that you could still have a presence of this apparent scope.”

Obama declared that America’s combat role was over at the end of 2014 and reduced the number of troop in the country to roughly 10,000, whose primary role is to train and advise Afghan forces, and continue to conduct anti-terrorism operations. Since then, however, U.S. military commanders have increasingly thrust their forces into the thick of the fighting as Afghan troops have struggled to contain a resurgent Taliban insurgency.

An American airstrike on Oct. 3 struck a hospital in the embattled city of Kunduz, killing at least 22 medical staff and patients. U.S. officials have yet to explain why or how the hospital was targeted, and the Afghan government has blocked media access to the site.

U.S. special operations troops also continue to conduct night raids, which became a controversial symbol of the decade and a half of American involvement in Afghanistan.

Attention to al-Qaida in Afghanistan has faded in recent years as many international jihadists have chosen to fight in Iraq or Syria rather than remote Afghanistan. But the issue of counterterrorism has again come to the forefront as the Islamic State group fighting in Iraq and Syria has made inroads in Afghanistan. Recently, both Afghan leaders and American military officials have been pushing for the U.S. military presence in Afghanistan to continue past the end of next year.

The existence of such al-Qaida camps, which may be a reflection of the group’s strong allies still operating in the region, could be used to bolster the arguments of those who say a continued American presence is necessary to prevent Afghanistan from again becoming a hub for international terrorism, Kugelman said.

“This announcement should serve as a wake-up call to those that dismiss the presence of al-Qaida in this part of the world,” he said. “The group is still very much alive and well in Afghanistan.”

The top American commander in Afghanistan, Gen. John Campbell, has been a vocal proponent of continuing such U.S. counterterrorism operations.

Cambpell argued, according to the U.S. Forces statement, that the operation in Kandahar against al-Qaida, which ended Sunday, “validates our ongoing campaign.”

“We continue to protect our fellow Americans at home by fighting al-Qaida here. I couldn’t be prouder of our brave U.S. servicemen and women and their Afghan counterparts. It’s because of their extraordinary efforts that terrorists here haven’t been able to attack our homeland in over 14 years,” he was quoted as saying.

Among the equipment recovered was a wide range of arms, including anti-aircraft weapons. Troops also seized “foreign passports, laptops and associated IT media, digital cameras and cards, documents, and mobile phones,” the statement said.