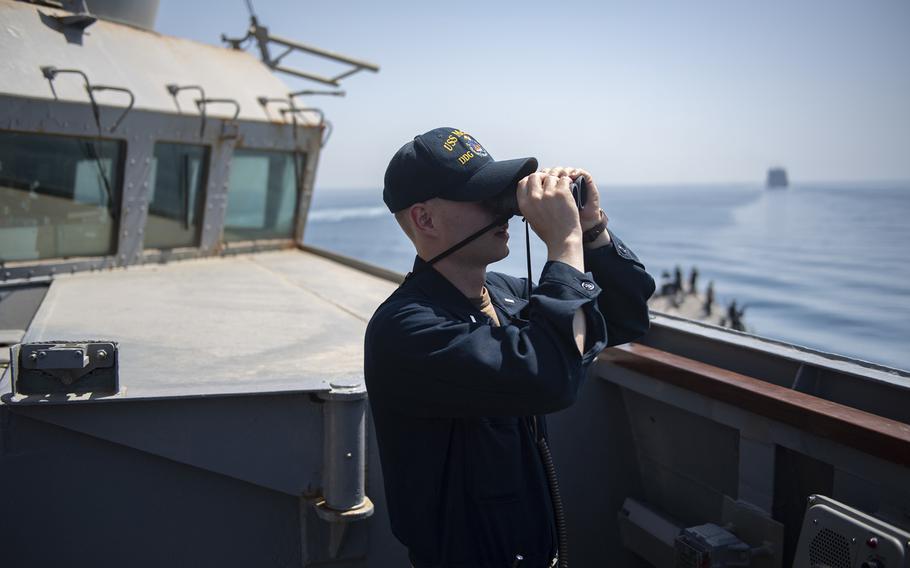 Lt. j.g. Christopher Monroe looks through binoculars on the bridge of the guided-missile destroyer USS McFaul while transiting the Strait of Hormuz, May 3, 2019. Iranian lawmakers have pushed a bill in the nation?s parliament that would impose tolls on foreign or ''unfriendly'' vessels transiting the busy strait. (Will Hardy/U.S. Navy)

Lt. j.g. Christopher Monroe looks through binoculars on the bridge of the guided-missile destroyer USS McFaul while transiting the Strait of Hormuz, May 3, 2019. Iranian lawmakers have pushed a bill in the nation?s parliament that would impose tolls on foreign or ''unfriendly'' vessels transiting the busy strait. (Will Hardy/U.S. Navy) 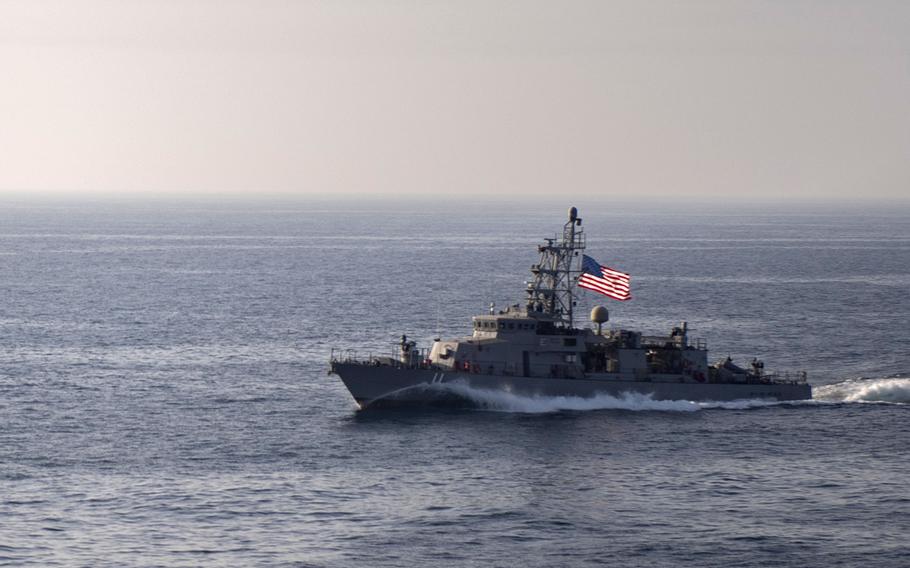 The coastal patrol ship USS Whirlwind transits the Strait of Hormuz, May 3, 2019. (Will Hardy/U.S. Navy)

MANAMA, Bahrain — The Pentagon said it is committed to the “free flow of commerce” through the Strait of Hormuz, a narrow waterway critical to global oil shipments, where Iranian lawmakers have proposed imposing transit tolls on ships that Tehran deems unfriendly.

“The Strait of Hormuz is an international waterway,” Pentagon spokeswoman Cmdr. Rebecca Rebarich said in response to a Stars and Stripes email query Tuesday. “Threats to restrict or close the strait impact the international community and undermine the free flow of commerce. The U.S., along with our allies and partners, is committed to freedom of navigation and remain well positioned and postured to preserve the free flow of commerce.”

The response followed Iranian media reports of a push by lawmakers to begin parliamentary debate this week on proposals aimed at countering U.S. sanctions, including imposing tolls on shipping.

The strait, which at its narrowest point is about 20 miles wide, includes the territorial waters of Iran and Oman. Although tolls exist for manmade canals that exist entirely within one country, such as the Panama Canal, maritime legal experts say tolls would not be permissible in what has long been considered an international transit point.

The proposed tolls would seek to “compensate” Iran for security expenses along the strait, lawmaker Amirhossein Qazizadeh Hashemi said to multiple Iranian media outlets on Sunday.

“If Iran is the real guarantor (of security) in the region and in international waters, then the parliament believes that … all ships in the region should pay the cost in the form of tolls, based on international norms, and due to conduct of the United States,” Hashemi said in an interview with Tehran-based Sobhe No' newspaper.

Tolls would be collected from “unfriendly countries, meaning those who have no trade relations with us and have recognized US sanctions (against Iran),” Hashemi said.

Collecting tolls at the strait wouldn’t comply with international agreements, Thomas Callender, a senior fellow for defense programs at the Heritage Foundation and former Navy submarine officer, told the Washington Examiner on Monday.

“There’s no question whatsoever about the rights of commercial vessels and tankers transiting the Strait of Hormuz and that they have this right to transit unimpeded,” Callender said, according to the Examiner. “To be trying to charge essentially tax to pass through this is a form of extortion.”

If tolls were imposed, ships that paid them might run afoul of U.S. sanctions, which could lead to them losing access to the U.S. financial system and the ability to do business with the United States or U.S. companies.

Roughly one-fifth of the world’s crude oil transits through the Strait of Hormuz, which encompasses Iranian territorial waters to the north, according to the American Society of International Law.

Iran has repeatedly threatened to close the 35-mile-long waterway to stop oil traffic if U.S. sanctions threaten Iranian oil exports. The United Nations Convention of the Law of the Sea, which Iran has signed but not ratified, considers closure of the strait illegal.

Years of crippling U.S. sanctions on Iran were lifted in 2015 when Tehran agreed to limit its nuclear activities and allow international inspectors onto its soil.

However, current National Security Adviser John Bolton and other critics were never convinced that the nuclear deal was sufficient to prevent Iran from maintaining a nuclear weapons program.

President Donald Trump pulled the U.S. out of the deal last year in May, and six months later reinstated sanctions on Iran and countries that trade with it.

Already high tensions in the region soared last month after Tehran shot down a U.S. military surveillance drone. The U.S. said the drone was flying over international waters, while Iran said the drone had entered its territory.

The U.S. was poised to launch a retaliatory strike on Iran but pulled back at the last minute.

Since then, the Trump administration has sent additional troops, an aircraft carrier strike group, an amphibious readiness group and a bomber squadron to the region, where it maintains multiple bases in partner nations.