Lt. Col. Drew Ryan, right, talks with a village sheik with the help of a translator. Ryan and his 223rd Military Intelligence Battalion will leave this month after a year in Iraq. (Marni McEntee / S&S)

Lt. Col. Drew Ryan, right, talks with a village sheik with the help of a translator. Ryan and his 223rd Military Intelligence Battalion will leave this month after a year in Iraq. (Marni McEntee / S&S) 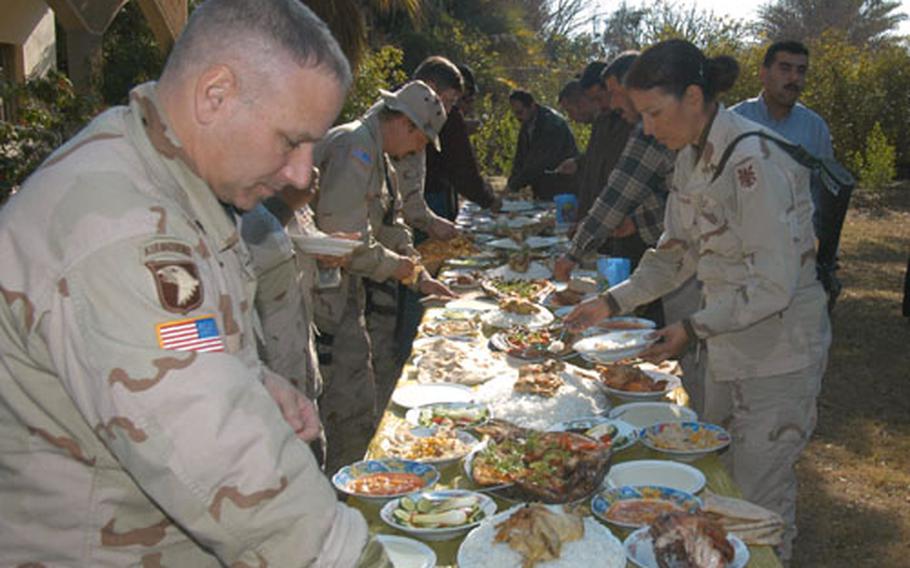 Lt. Col. Drew Ryan, left, and members of his 223rd Military Intelligence Battalion, dig into a lunch provided at the home of a village sheik. (Marni McEntee / S&S)

BALAD, Iraq &#8212; Lt. Col. Drew Ryan was sharing lunch with the elder sheik in a tiny Iraqi village when the sheik&#8217;s son ran up to the table, announcing that villagers had found something.

As it turned out, one of the Army&#8217;s unmanned aerial vehicles had crashed into a tree nearby.

The incident, Ryan said, shows just how effective his soldiers have been in developing a beneficial relationship with the Iraqis who live near LSA Anaconda, the sprawling Army base near Balad, about 60 miles north of Baghdad.

Ryan and his troops had won a small battle in a war where words are often a more potent force than weapons.

Ryan can reflect on his battalion&#8217;s work, begun in March 2003, because the 223rd is preparing to go home. At times, Ryan and his soldiers say, their deployment has been an uphill battle.

In many ways, the 223rd is a textbook example of how some Army units &#8212; particularly in the National Guard and Reserves &#8212; were sent to Iraq lacking the basic equipment they needed.

Most of the unit&#8217;s 113 soldiers bought their own bulletproof vests, global positioning systems and handheld radios. They deployed to Iraq with aging green tents that leaked during the rainy season and lacked heating and air-conditioning. Replacement parts aren&#8217;t even made anymore for their Vietnam-era 2&#189;-ton trucks.

Staff Sgt. Don Bottorff said that at first, he felt that some active-duty soldiers looked down on the 223rd because it clearly was ill equipped.

Soldiers improvised at every turn. They bought canvas tarps to cover their tents and used Styrofoam packing material for insulation. They packed the Humvee floorboards with sandbags and hired Iraqis to build heavy steel doors and floor plates for the vehicles.

Living conditions have gotten better. In December, the 223rd moved into hard buildings when another battalion left. Shower trailers and several dining facilities are now nearby.

Life outside the wire is better, too. The unit helped build seven schools in the area, at a cost of about $50,000 each. The projects have helped engender the loyalty of locals. That, in turn, has led to crucial intelligence that cut the number of mortar attacks on the base and prompted some farmers to report deadly explosive devices.

Ryan, a Marin County Sheriff&#8217;s Department officer at home in California, likes most to talk about these successes &#8212; which he says don&#8217;t often make it into newsprint these days.