'In tents' scare near Ramstein 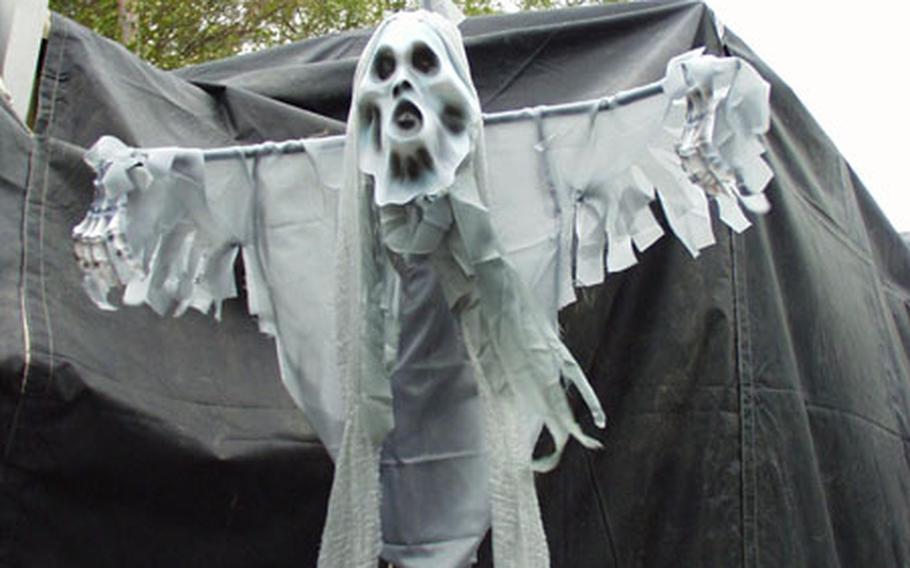 This ghostly figure is one of the more mild scare tactics used at the annual Haunted Tent City, open Monday to Halloween night at Ramstein Air Base. (Marni McEntee / S&S)

This ghostly figure is one of the more mild scare tactics used at the annual Haunted Tent City, open Monday to Halloween night at Ramstein Air Base. (Marni McEntee / S&S) RAMSTEIN AIR BASE, Germany &#8212; Everyone knows tent cities can be pretty scary &#8212; but not this horrifying.

From its &#8220;scary Christmas&#8221; display to its torture chamber and its outdoor crypt walk, Ramstein&#8217;s annual Haunted Tent City is sure to cause even the bravest troop to cower.

The CTS puts on the Haunted Tent City every year, adding new twists, turns and terrors to thrill all comers. The scare-fest is very popular with local German teens and families as well as U.S. military members and civilians, Hummingbird said.

It also has two large tents where visitors can stay warm while waiting to enter the haunted city. Hummingbird said last year there were long lines of people waiting to get frightened.

The warming tents will include beverages and food for sale.

The tent city is about three miles from Ramstein Air Base&#8217;s west gate. Head west and watch for a sign saying &#8220;Welcome to USAFE CTS.&#8221; There is plenty of parking available.