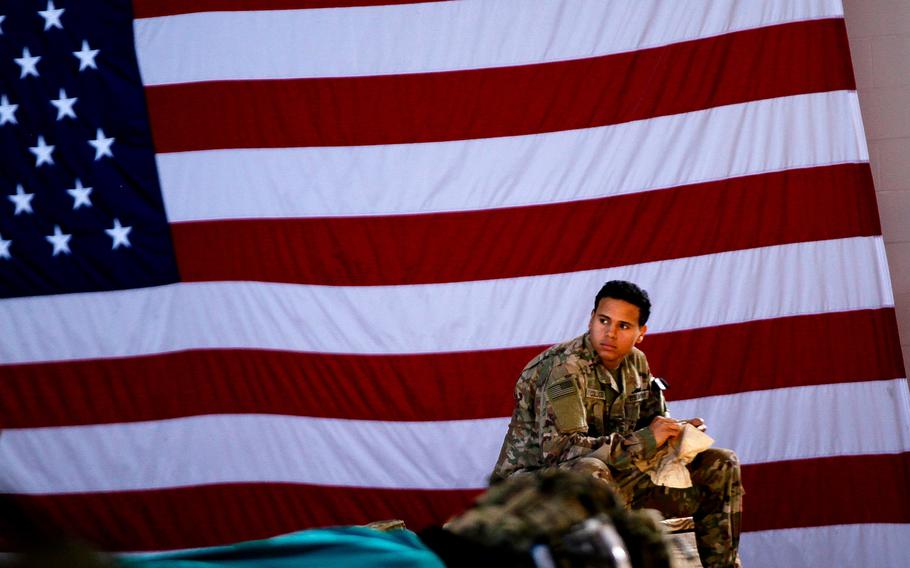 A soldier assigned to 1st Brigade Combat Team, 82nd Airborne Division waits to board an aircraft bound for the Middle East, from Fort Bragg, N.C. on January 5, 2020. Some 2,500 soldiers rapidly deployed days after Christmas and are now separated from their families indefinitely as the military works to fight the spread of the coronavirus. (Hubert Delany III/U.S. Army)

A soldier assigned to 1st Brigade Combat Team, 82nd Airborne Division waits to board an aircraft bound for the Middle East, from Fort Bragg, N.C. on January 5, 2020. Some 2,500 soldiers rapidly deployed days after Christmas and are now separated from their families indefinitely as the military works to fight the spread of the coronavirus. (Hubert Delany III/U.S. Army) A soldier from the 1st Brigade Combat Team, 82nd Airborne Division jumps from a CH-47 Chinook over Kuwait, March 11, 2020. Some 2,500 soldiers who rapidly deployed to the Middle East days after Christmas are now separated from their families indefinitely as the military works to fight the spread of the coronavirus. (Andrew Zook/U.S. Army)

Some 2,500 Army paratroopers who were rushed to the Middle East just days after Christmas remain separated from their friends and families indefinitely as the rapidly spreading coronavirus prevents them from returning home.

Soldiers of the 82nd Airborne Division’s 1st Brigade Combat Team had just days to say goodbye to loved ones before they were sent to bolster security in U.S Central Command after a rocket attack killed an American contractor in Iraq and retaliatory U.S. strikes led a militia to storm the U.S. Embassy in Baghdad.

Though about 800 of the troops returned to Fort Bragg, N.C., in February, before the coronavirus pandemic forced widespread restrictions on civilian and military movement around the world, the rest remain in Kuwait without clear answers on when they’ll be sent home or why they’re still deployed.

“We have to wait until next week to learn what CENTCOM wants to do with us,” said one of the soldiers, who was not authorized to discuss the matter and asked not to be named. “My wife is trying to take care of our [infant] during the quarantine by herself, when we were originally told we would only be gone two months.”

A 60-day halt Defense Secretary Mark Esper ordered this week on overseas travel, including deployments and redeployments, would not apply to them, the soldier was told Thursday.

But because of the COVID-19 restrictions, division officials “simply do not know when they will begin their redeployment,” commanding general Maj. Gen. James J. Mingus said in a post on the “All American Divi-sion” Facebook page this week, referring to the 1st Brigade and other elements of the division in CENTCOM.

Meanwhile, quality of life has shifted dramatically for the soldiers and others at posts in the region, with base gyms and some dining facilities closed, and other services limited to try to slow the coronavirus’ spread.

“Deployments are always hard for paratroopers and their families,” said Lt. Col. Mike Burns, the division’s spokesman. “And especially hard with the ongoing coronavirus pandemic.”

The unit’s 3rd Brigade Combat Team has begun redeploying to the U.S., where soldiers have been quarantined on their return, after a regular 9-month rotation in Afghanistan. Their travel won’t be affected by Esper’s order, Burns said in an email Thursday.

But the 1st Brigade’s deployment, the “most significant no-notice deployment of combat forces in more than 30 years,” was “open-ended” and subject to CENTCOM’s needs, he said.

Tensions in the region remain high, following rocket attacks in Iraq this month, including one on Camp Taji, north of Baghdad, that killed two American service members and a British soldier, and wounded more than a dozen others. The U.S. responded by striking sites in Iraq the Pentagon said were used by Iran-backed Shiite militia Kataeb Hezbollah.

On Thursday, the State Department ordered some U.S. diplomatic personnel to leave Iraq and announced new sanctions on organizations and people it said were funneling money out of that country to the Irani-an military, which used it to sponsor militias like Kataeb Hezbollah.

The brigade continues to play a “vital role in the defensive posture in the region,” and officials frequently assess its continued presence there, said a defense official who asked not to be named in order to discuss the matter. CENTCOM leaders are also grappling with the question of whether to “backfill” the soldiers when they are sent home, the official said by email.

“Those that remain in theatre may understandably feel ‘stuck’ in a deployment that they and their Families did not have the luxury of planning for,” the official said. “While it’s completely understandable for many 1BCT Soldiers and Families to feel ‘in limbo,’ rest assured they are most definitely not.”