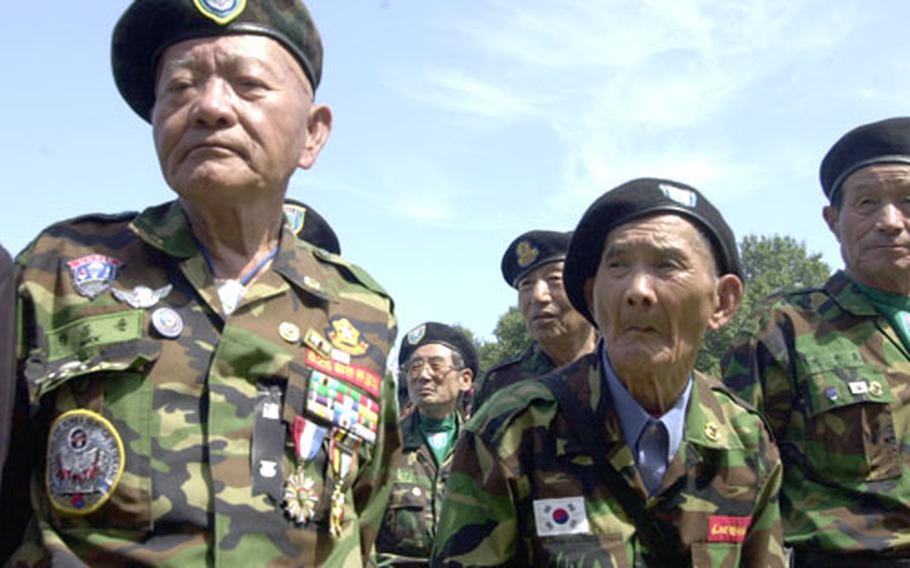 Members of the Federation of Partisan Forces Korea stand in formation on Kyodong Island during a ceremony on Tuesday. (T.D. Flack / S&S)

KYODONG ISLAND, South Korea &#8212; A small group of elderly South Korean men has gathered on an island annually for the past five years to do something they claim their own country won&#8217;t do: honor their service during the Korean War.

Members of the Federation of Partisan Forces Korea say that neither South Korea nor the United States will recognize them for their bravery in fighting communist North Koreans and Chinese during the Korean War.

When Korea was divided at the end of World War II and the communist Kim Il Sung took charge of the north, many anti-communists fled the country to islands in the waters off the west coast. Armed with ancient weapons and small boats, they waged guerrilla warfare against the communists.

The only U.S. entity that shows them gratitude today, members say, is the U.S. Special Operations Command Korea. It&#8217;s a relationship that goes back to 1953, when some of the first U.S. soldiers to earn the green beret worked with the partisan forces on the peninsula.

Federation president Park Sang-joon, 82, thanked the Americans for making the three-hour trip from Seoul to help honor &#8220;those who sacrificed themselves during the war.&#8221;

And Col. Simeon G. Trombitas, SOCKOR commander, said the U.S. troops found themselves humbled to be &#8220;in the presence of such warriors and patriots.&#8221;

Dozens of the veterans clad in a hodgepodge of camouflage uniforms, ribbons hanging from their chests, sat in single-file rows for the ceremony.

Following the ceremony, Park stood on the shoreline and pointed to his family&#8217;s home in North Korea. He said he has no idea whether any of his loved ones are alive.

After the war, the U.S. military gave control of the partisan forces to South Korea. South Korea transferred the men into their military but immediately discharged them.

Park said members of his organization fought for U.S. and South Korean recognition, but their efforts have so far slipped through the cracks.

The U.S. Department of Defense recently turned down a request for recognition, stating the 8240th belonged to South Korea, federation members said. And the South Korean Ministry of Defense claims the 8240th was a U.S. 8th Army unit.

Park explained that his members aren&#8217;t looking for any sort of compensation.