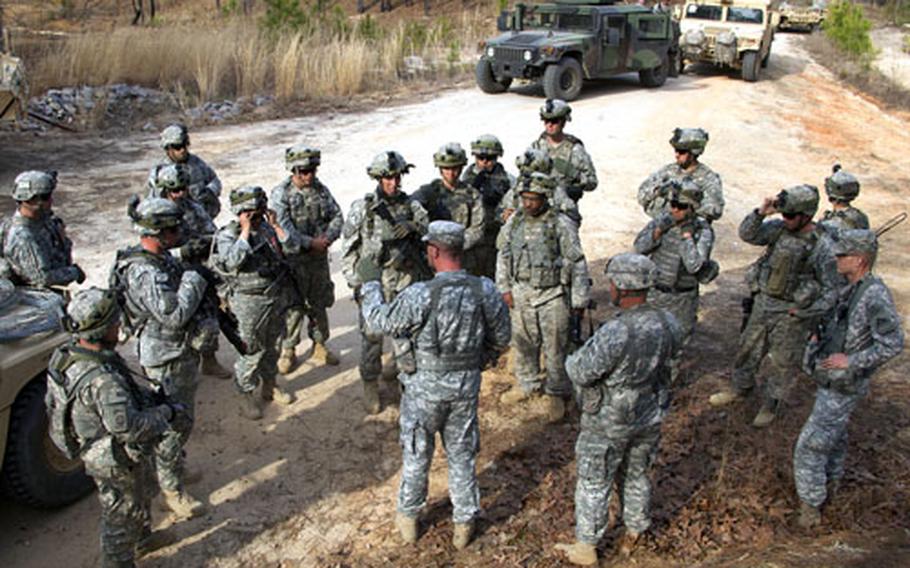 Observer controllers from the Joint Multinational Readiness Center at Hohenfels, Germany, conduct an after-action review with soldiers from the 82nd Airborne Division during an exercise at Fort Bragg, N.C. The mission was part of the exportable training system developed by the JMRC for use at a unit&#39;s home base. (Tia P. Sooimson / Special to Stripes)

Observer controllers from the Joint Multinational Readiness Center at Hohenfels, Germany, conduct an after-action review with soldiers from the 82nd Airborne Division during an exercise at Fort Bragg, N.C. The mission was part of the exportable training system developed by the JMRC for use at a unit&#39;s home base. (Tia P. Sooimson / Special to Stripes) 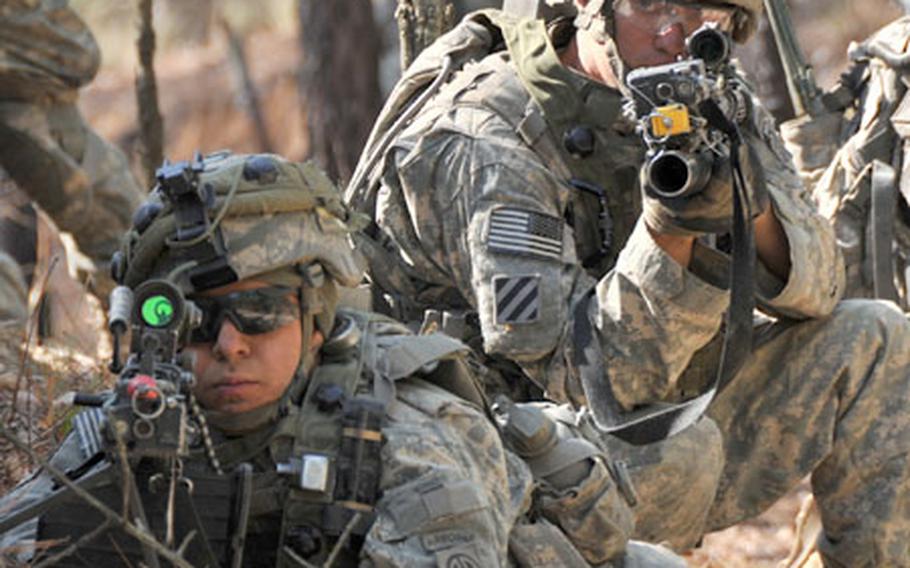 The exercise is designed to test the cost effectiveness of providing pre-deployment training for troops at their home bases instead of sending them to the Army&#8217;s combat training centers.

JMRC has spent the last few years developing an "exportable" training system that uses radio signals to track units on the simulated battlefield, then relays the information to computers so that it can be displayed on screens for after-action reviews that trainers use to show units what they should be doing in combat.

The system has been used during training in Romania and Bulgaria but this is the first time it has been taken back to the United States.

"The Army is looking at a new capability of being able to provide similar training to what units can receive at a training center in their own backyard, which is what this exportable training package is," according to Maj. Nick Sternberg, the JMRC public affairs officer.

"We are using the training area at Fort Bragg and we have added to it by constructing MOUT (military operations in urban terrain) sites and mock villages," Sternberg said.

The training for the 82nd is similar to what a deploying unit would do, he said. However, the 82nd is the U.S. military&#8217;s "strategic reserve," meaning it is on standby to deploy at a moment&#8217;s notice wherever the president deems necessary. For example, a strategic reserve brigade was deployed to Iraq during the troop "surge," he said.

So the training conducted by the JMRC is not geared toward any particular country. Instead it focuses on a fictional conflict designed to test the unit&#8217;s ability to deal with the sort of problems they might encounter in the contemporary operating environment, he added.

One advantage of training a unit at its home base is that the soldiers spend less time away from home, Sternberg said.

"With the number of deployments that units have and the requirements they have before they deploy this reduces time away from home and family during training," he said.

The home-base training could be used for active-duty, National Guard and Reserve units, he said. Those units that do not have enough training land available at their home bases will still need to travel to maneuver training centers, he added.

"I&#8217;m almost certain that the other training centers are going to adopt a similar system," Sternberg said.