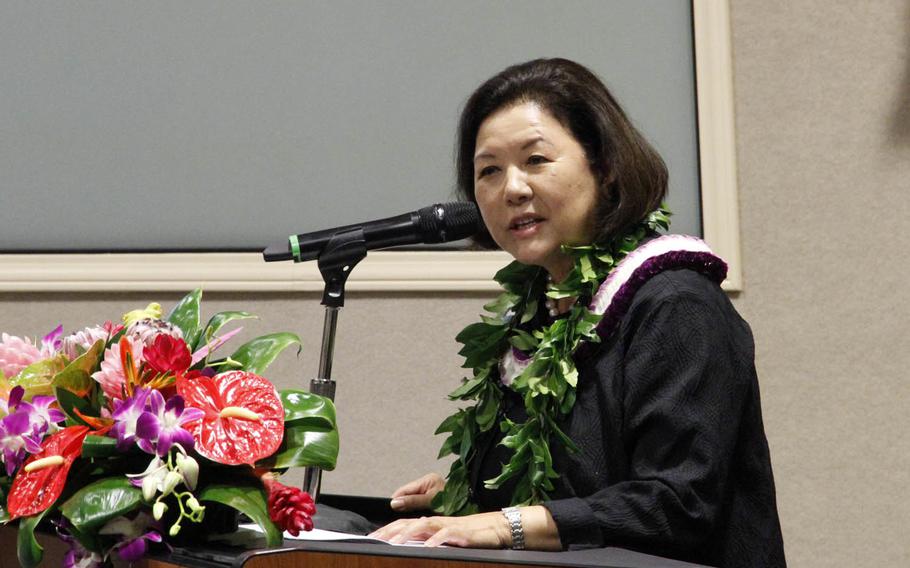 Irene Hirano Inouye speaks during a ceremony Tuesday, Oct. 6, 2015, in Honolulu that renamed the Daniel K. Inouye Asia-Pacific Center for Security Studies in honor of her late husband and longtime Hawaii senator. (Wyatt Olson/Stars and Stripes)

Irene Hirano Inouye speaks during a ceremony Tuesday, Oct. 6, 2015, in Honolulu that renamed the Daniel K. Inouye Asia-Pacific Center for Security Studies in honor of her late husband and longtime Hawaii senator. (Wyatt Olson/Stars and Stripes) 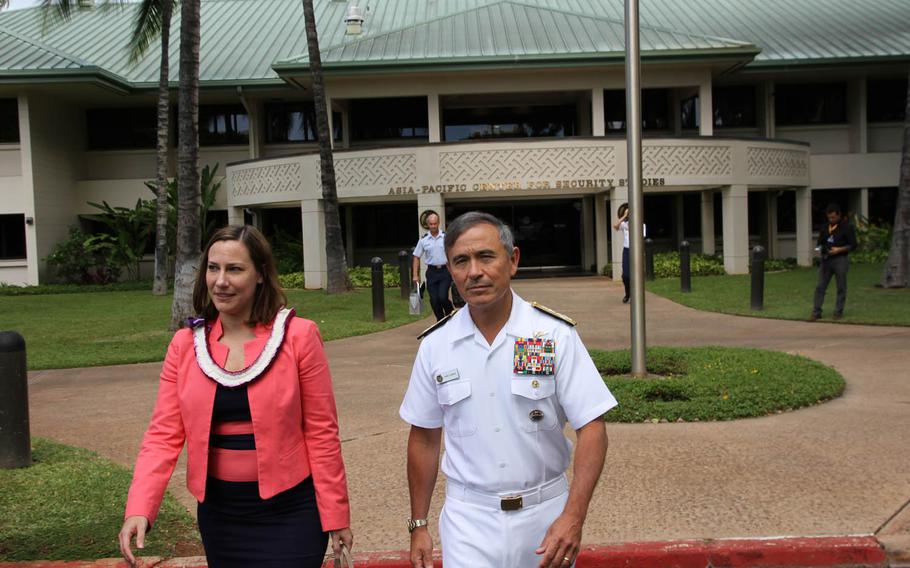 Harris ticked off some of the top priorities facing the region.

“From North Korea‘s unstable, aggressive leader who’s on a quest for nuclear weapons and the means to deliver them internationally, to a resurgent, revanchist Russia — the security environment out here remains dynamic,” he said.

“We’re attempting to build a mature relationship with China, but Beijing continues to act aggressively and coercively to assert its outrageous territorial claims in the South and East China Seas.”

APCSS has become the “go-to” venue for the education and understanding that is the beginning of answering those challenges, he said.

The event also marked the think tank’s change of name to the Daniel K. Inouye Asia-Pacific Center for Security Studies, a tribute to Hawaii’s long-time senator who ushered in funding for the center, located on Waikiki Beach. Inouye, a World War II veteran, died in 2012.

“DKIAPCSS is a mouthful,” Irene Hirano Inouye, the senator’s widow and president of the U.S.-Japan Council, joked during an address to the audience of about 400. “So I’m sorry for those of you who are going to work here, but it is a great name.”

Turning more serious, she said, “I’m sure he’s smiling down on us this morning.”

The late senator seemed omnipresent during the hour-long ceremony, with speakers making numerous references to his Senate record and heroic actions with the storied 442nd Regimental Combat Team in Italy, out of which he was awarded the Bronze Star and Medal of Honor, as well as a Purple Heart for injuries that cost him his right arm.

His biography is “probably taught in Hawaii’s schools before students even learn the multiplication tables,” Harris said.

Inouye argued that Hawaii was of great strategic importance for the Pacific region, and he kept the funding flowing for the military in the state during the almost 50 years he served in the Senate.

“Sen. Inouye dedicated his life to ensuring America maintained a strong military as a deterrent to war,” Harris said. “He often recounted that his experience fighting for his country showed him how firmly the U.S. should avoid war and that the best deterrent is a strong and capable military.”

To that end, the APCSS, which operates under PACOM, now annually enrolls more than 1,100 civilian and military fellows from countries throughout the region.

The APCSS helped facilitate the drafting of a 2014 peace deal in the Philippines between national forces and Islamic rebels, and it is assisting the Laos government to become chair of the Association of South East Asian Nations next year.