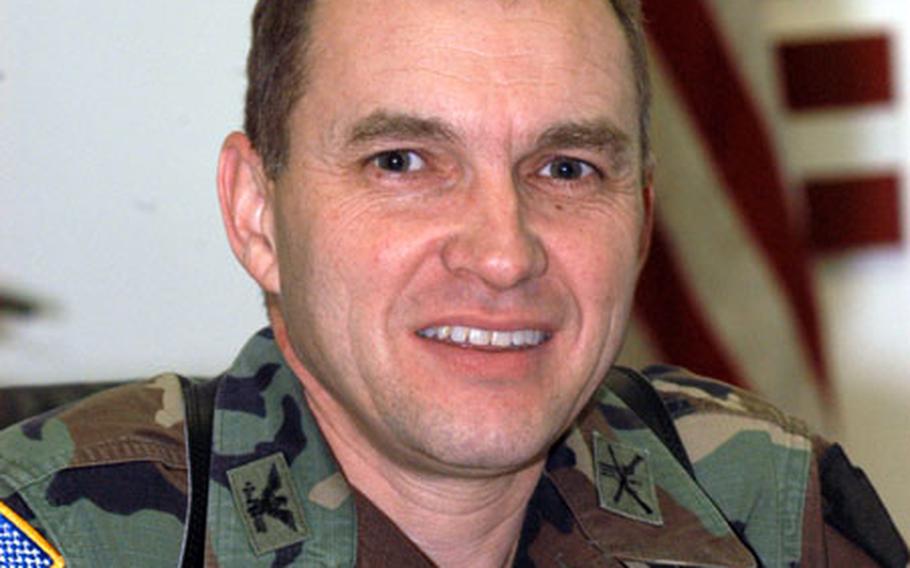 Col. Jerry G. Beck Jr., the deputy commander of multinational Brigade North, says Pennsylvania&#39;s 28th Infantry Division is ready to take over the peacekeeping mission in Kosovo, the second one in the Balkans for the division. (Ivana Avramovic / S&S)

EAGLE BASE, Bosnia and Herzegovina &#8212; The Pennsylvania National Guard is full of busy soldiers.

For the past six months, the unit&#8217;s troops have been protecting bases in Germany and handling peacekeeping duties in Bosnia.

Those missions are winding down, with many soldiers already home or on their way home. But their stay will be a short one.

With a war pending against Iraq, there&#8217;s no rest for the weary.

Even before the end of the Bosnian mission, the Pennsylvania soldiers learned they were tapped to take over peacekeeping operations in Kosovo.

Finishing his rotation early to start preparing for the next deployment, Beck will be one of the first to leave Bosnia in the next 10 days. Keystone troops are scheduled to pass the flag to their successor in Bosnia in March.

Unlike the Bosnian mission, when the division trained for 18 months, it will have only a fraction of that time to prepare for Kosovo.

Instead of training only on the weekends, or for five to 10 days at a time, as they did for the Bosnian mission, 1,100 Pennsylvania National Guardsmen will be mobilized for about three months to prepare for their next deployment, Beck said.

Still, the 1st Infantry Division, based in W&#252;rzburg, Germany, will have to hold down the fort in Kosovo, he said. Those troops were expected to leave the Balkans in May.

Beck estimates it will take an additional 30 to 60 days before the Pennsylvania unit makes it to Kosovo.

Officials from the 1st Infantry Division were unable before press time to comment on the possibility of 1st ID troops being extended.

Beck said his time in Bosnia has been great preparation for the next deployment.

&#8220;I think being here is probably what&#8217;s going to help me down in KFOR,&#8221; Beck said. Unlike with combat, the peacekeeping mission requires a soldier to not overreact, not listen the first report and not rush to failure, he said.

During his time in the Balkans, Beck has met the people, seen how things work and done the mission.

Many Keystone guardsmen in Bosnia and at home have volunteered to join Beck on the next deployment.

While the skills and knowledge the troops acquired while deployed to Bosnia would be valuable, Beck said, those troops who weren&#8217;t part of the previous rotations will be picked first.