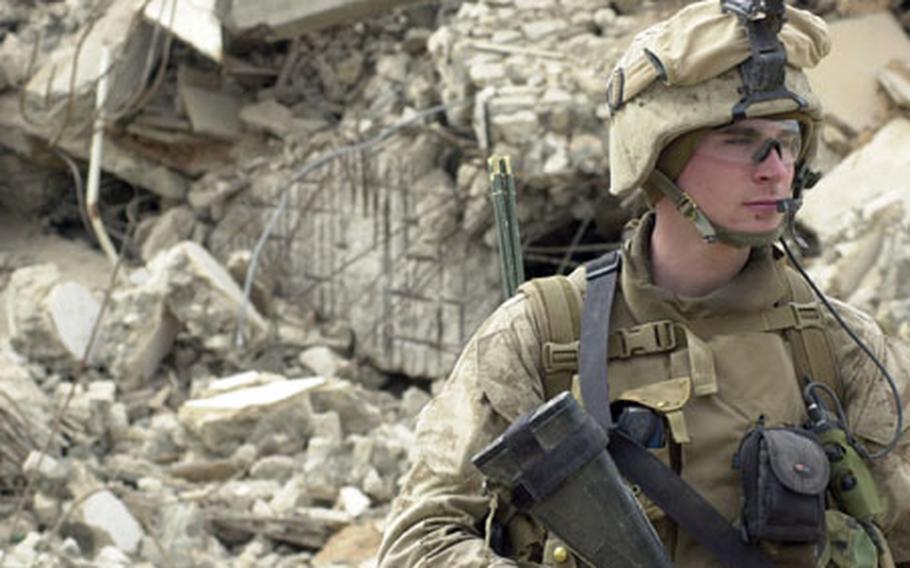 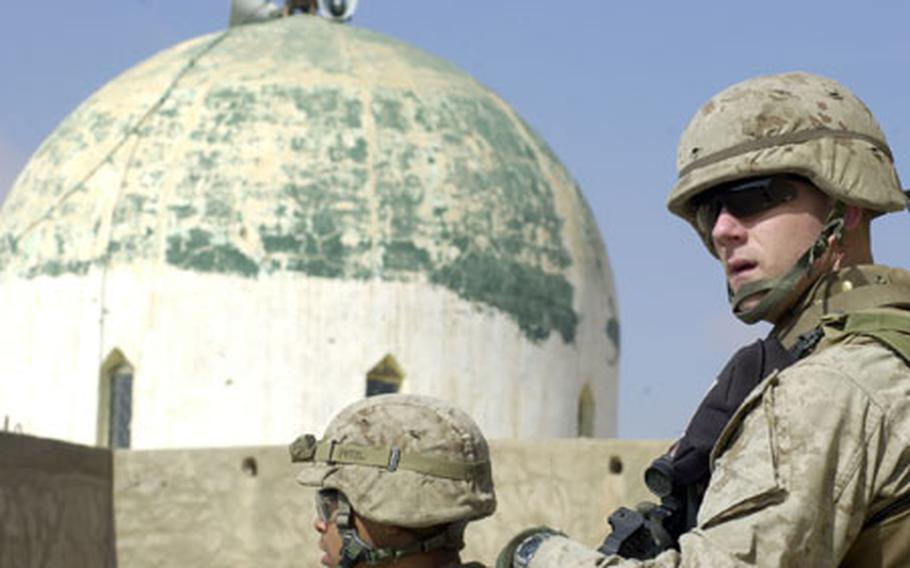 Marine Sgt. Alan Holloway, right, 27, of Rome, Ga., and Navy corpsman Joseph Poquiz, 21, of Freemont, Calif., continue a patrol on Feb. 14 in Haqlaniyah, Iraq. Hours later, near where this picture was taken, an insurgent tossed a grenade in a house where the Marines had established a temporary combat outpost. (Steve Mraz / S&S) 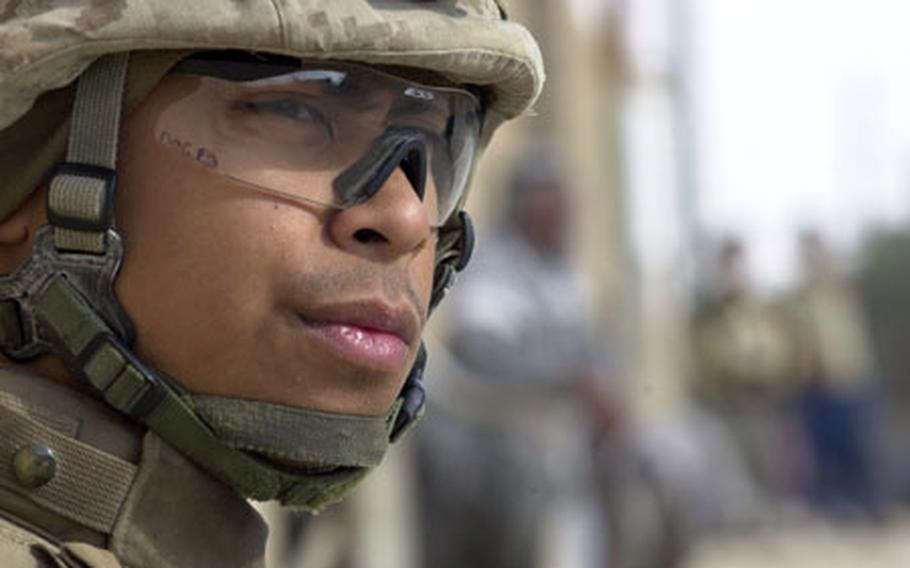 Navy corpsman Joseph Poquiz scans the streets and alleys of Haqlaniyah, Iraq, during a Feb. 14 patrol. Hours later, Poquiz and Marines on scene would provide emergency first aid to Lance Cpl. Travis Dodson, who was wounded in an enemy grenade attack. Dodson survived but lost his left leg and a portion of his right leg. (Steve Mraz / S&S) 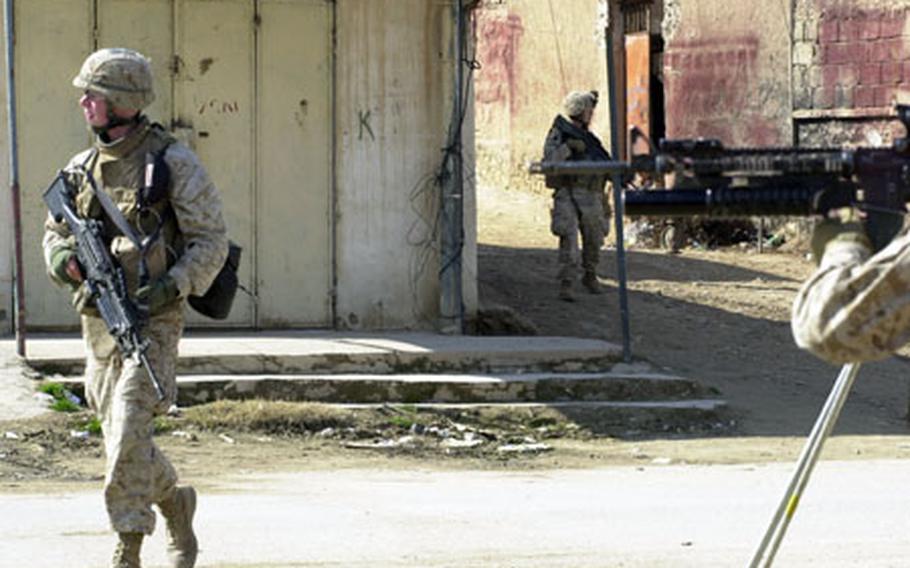 HAQLANIYAH, Iraq &#8212; Bathed in the fading glow of sunset on the banks of the Euphrates River, Haqlaniyah offered a glimpse of tranquility in Iraq&#8217;s otherwise volatile Anbar province. It&#8217;s that tranquil state the Marines of Company G, 2nd Battalion, 3rd Marine Regiment deployed here from Kaneohe Bay, Hawaii, would like to sustain.

But the moment, like the sun sinking on the western horizon, would not linger.

At the same time, an insurgent likely crept along a wall in front of the home, out of sight from the Marines positioned on the roof. Gunshots fired toward the house signaled the attack and shattered the evening calm.

The immediate and deafening explosion was followed by Marines shouting orders and rushing to the aid of Dodson and Morris, the only two seriously wounded by the blast. Both Marines were pulled into separate rooms, leaving blood trails along the way.

Marines and Navy corpsmen cut and ripped open Morris and Dodson&#8217;s uniforms to assess the injuries and treat their wounds. Dodson had critical wounds to both legs. The grenade is believed to have landed in his lap.

Despite his serious injuries, Dodson remained conscious. Marines tossed water on his face to keep the 21-year-old from going under. He implored his buddies to not let him bleed out, but he never screamed in pain. Initially, one Marine used his own uniform blouse to stem Dodson&#8217;s blood loss. Navy Corpsman Joseph Poquiz applied a tourniquet to Dodson, preventing potentially fatal blood loss.

In the adjacent room, Morris was having a tough go of it. The 19-year-old&#8217;s breathing was strained. The grenade had blasted his entire left side with shrapnel. Marines ripped off their issued tourniquets to halt blood loss from an injury to Morris&#8217; left leg. I held the teenager&#8217;s head, hoping to ease his breathing and provide some comfort.

Cpl. Daniel Goldberg, who had been treating Morris, began preparing to move the wounded downstairs. A convoy was on its way and would deliver Morris and Dodson to a landing zone for medical evacuation helicopters already en route.

Morris was first loaded onto a stretcher. Marines navigated the stricken Devil Dog through a tricky stairway and out to the convoy. Morris began breathing on his own again as he left the house.

The convoy sped away for the landing zone and choppers were heard flying over the house soon thereafter.

At the house, the remaining Marines dealt silently with their frustrations. A few head shakes. A few cigarettes. Determined faces.

The second story stood awash in vestiges of the horrific event. Blood. Bandages. Bits of flesh.

Removing sensitive materials from the room where the grenade exploded, one Marine &#8212; overcome by the graphic scene of his comrades&#8217; blood &#8212; walked outside and vomited. He gathered himself, and he and others began the unenviable task of cleaning up. Another Marine ventured into the room where Dodson had been treated, clenched his gloved fists and dabbed them in his buddy&#8217;s blood.

Hours later, the Marines would be gathered into a room in the house and told that Morris had died not long after he was transported away. Dodson was still alive but had lost both legs. A silence so strong enveloped the dimly lit room that it could be felt. The silence lasted for minutes that passed like hours.

Dodson lost his left leg at the hip, his right leg below the knee and wore a bandage over his right eye.

During medical treatment at Al Asad Air Base shortly after the grenade attack that injured him, Dodson received more than 30 units of blood.

On Monday at Landstuhl&#8217;s intensive care unit, Dodson was breathing on his own and in stable condition but wasn&#8217;t conscious. Dodson was transported Tuesday to the National Naval Medical Center in Bethesda, Md., for additional treatment.

Since his injury, Dodson has undergone several surgeries. Dodson&#8217;s family is tracking his progress on a Web site it updates daily. For the latest on Dodson&#8217;s recovery, visit www.travisdodson.com.