GIs use strategic town as base in search for missing soldiers 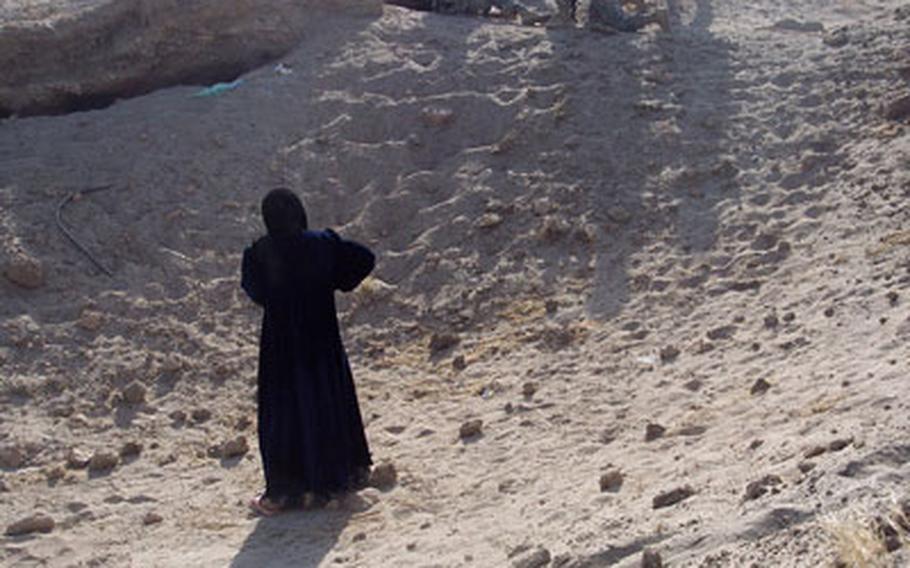 A 23-year-old woman from Owesat, about 15 miles southwest of Baghdad, shows U.S. soldiers where she claims she saw her brother dump the remains of two soldiers abducted May 12 near Yusufiyah. The soldiers, from the 101st Airborne Division, detained the man to investigate his role in the abduction, and three of his brothers for insurgent-related activities. (Erik Slavin / S&S)

OWESAT, Iraq &#8212; The village across the Euphrates River from Patrol Base Dragon isn&#8217;t large, but its location between two volatile centers in Iraq has put it on the map in the eyes of coalition forces.

Owesat and its surrounding farms comprise about 3-by-2 square miles, but the town lies 15 miles from Baghdad and about the same distance to Fallujah.

The town&#8217;s outlying desert is now the focus of the search for two 10th Mountain Division soldiers missing since May 12, after a local woman who identified several high-value insurgent targets pointed U.S. soldiers there.

But military planners from the 101st Airborne Division had targeted the town for tactical reasons as well.

It lies on the western flank of Patrol Base Dragon, with an abandoned power plant serving as the home of Task Force 3-187 and the 3rd Battalion, 187th Infantry Regiment.

&#8220;As we slowly choked off their other routes, the insurgents would use this more or less as a truck stop,&#8221; Rohling said.

Soldiers have slogged through several miles of farms and sand dunes since Friday&#8217;s aerial landing, rooting out weapons and insurgent communications devices.

&#8220;Two-foot-deep mud is awesome,&#8221; said Pfc. Josh Elmore of Hackett, Ark., who stepped in his share of it while advancing on a farmhouse that had been filled with bombs before soldiers blew it up Sunday.

Other soldiers are taking pictures and gathering information on the town&#8217;s residents in advance of operations for Patrol Base Kemple, which began full-scale construction Sunday and is linked by a pontoon bridge to Patrol Base Dragon.

The entry into Owesat was less dangerous than some soldiers expected, they said. However, soldiers were attacked in a Sunday firefight near a school that U.S. soldiers are using as a temporary base.

Also on Sunday, two soldiers suffered injuries after a pressure-plate bomb exploded, not an AK-47 magazine tied to explosives as initial reports indicated. One soldier suffered catastrophic injuries to more than one limb, while the other broke an arm but is stable, officials said.

The two injured soldiers were in the area where soldiers are searching for the suspected remains of Spc. Alex R. Jimenez and Pvt. Byron W. Fouty, who were abducted in May near Yusufiyah.

The body of a third soldier, Pfc. Joseph Anzack Jr., who was also abducted May 12, was found in the Euphrates River on May 23.

Following their initial push, Task Force 3-187 plans on signing contracts with local leaders that promise funds for its &#8220;concerned citizens&#8221; if they eliminate violent threats for the next two weeks.

Those citizens will earn $10 to $15 per day to observe checkpoints. Soldiers say they have used the same plan in other communities on Baghdad&#8217;s outskirts in recent months and seen drops in violent attacks.