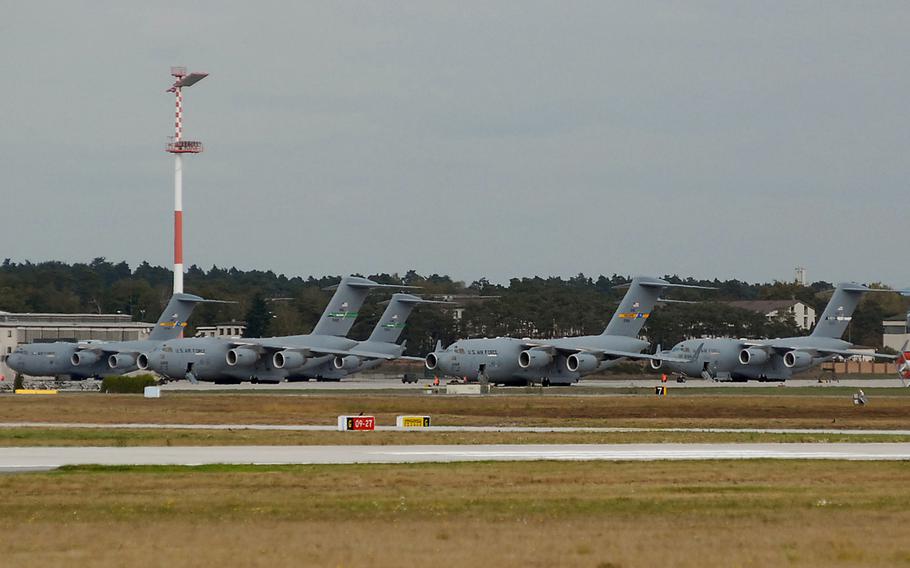 Buy Photo
U.S. Air Force C-17 Globemaster IIIs sit on the flight line at Ramstein Air Base, Germany. The German prosecutor?s office in Kaiserslautern says it is looking into a report that the Pentagon used Ramstein Air Base to transport weapons covertly to rebel fighters in Syria, an allegation, that if true, might have broken German law. (Michael Abrams/Stars and Stripes)

The German prosecutor’s office in Kaiserslautern said Friday it is looking into a report that the Pentagon used Ramstein Air Base to transport weapons covertly to rebel fighters in Syria — an allegation, that if true, might have broken German law.

Ramstein — a key U.S. military logistical hub overseas from which cargo is ferried throughout Europe, the Middle East and Africa — was linked to Washington’s effort beginning in 2013 to arm Syrian rebels fighting the Islamic State, according to a report Tuesday in the German newspaper Sueddeutsche Zeitung.

The weapons transfer through Ramstein would have required permission from the German government, the report stated.

Officials with Germany’s Economic Affairs Ministry told Stars and Stripes that the ministry did not give the U.S. military permission to transport weapons to Syria through the country. They denied having any knowledge of such activities.

A spokeswoman for the 86th Airlift Wing at Ramstein referred an inquiry about the weapons report to a spokeswoman at the Pentagon, who said the department “does not store or transit weapons or ammo bound for Syria in or through any U.S. bases in Germany."

DOD “has and will continue to comply with all German laws,” said Army Lt. Col. Michelle Baldanza, a Pentagon spokeswoman, in a statement to Stars and Stripes on Friday.

“To that end, DOD has specifically directed our contracted vendors to not transit or store equipment in Germany that is intended for use in Syria.”

The report was based on months of research by journalists with the newspaper, the Organized Crime and Corruption Reporting Project and the Balkan Investigative Reporting Network. The organizations cite internal emails they stated were obtained from the U.S. military, interviews with whistleblowers and official documents, such as the United Nations arms export reports for 2015 and 2016.

Udo Gehring, the district prosecutor in Kaiserslautern, confirmed Friday that his office was reviewing the allegations against the base since they involved a “possible criminal act.”

The case is complicated and “not easy to review,” he said, declining to comment further

The report alleged that U.S. military contractors purchased Soviet-style weapons from across central and Eastern Europe and had them shipped to Syria through ports in Romania and Bulgaria, as well as via Ramstein.

Transit licenses approved by German authorities specified U.S. military bases in countries such as Germany, Romania and Turkey as the delivery point — but not Syria, according to the report.

The supply route was diverted from Germany in late 2016, as transit permits were taking longer to get approved “due to the large number of requests and questions” from German authorities, according to an internal Pentagon email the report stated was leaked to BIRN and OCCRP. At that time, contractors were told the State Department would assume responsibility for requesting new transit licenses, the report stated.

She noted that the Pentagon’s “Iraq and Syria train and equip efforts” are focused on enabling local forces to defeat Islamic State quickly and secure liberated territory to prevent the group’s return.

“To achieve these goals rapidly and sustain them into the future, DOD sources equipment that is simple to operate and maintain,” Baldanza said.

Syrian opposition groups are vetted, she said, and the sourcing of equipment is done according to DOD regulations.

The Pentagon, she said, works closely with the State Department, NATO allies and European partners on the sales of military weapons, ammunition and equipment, among other matters pertaining to mutual security interests.