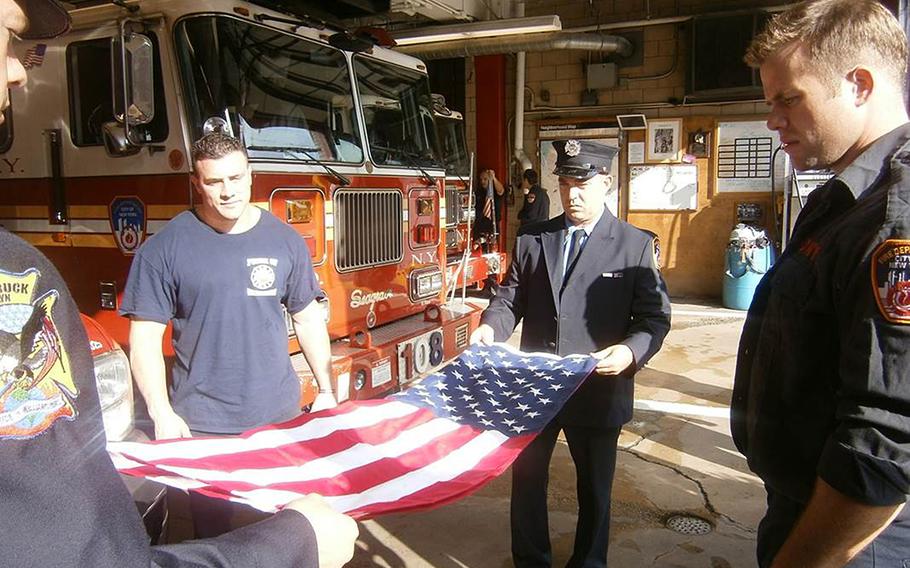 Members of the New York Fire Department, Engine Company 216, Ladder Company 108, who are also veterans, participate in a program where they have flags flown in combat or at Ground Zero in New York, and then present those flags to Gold Star families. (Photo courtesy Pat McCauley)

Members of the New York Fire Department, Engine Company 216, Ladder Company 108, who are also veterans, participate in a program where they have flags flown in combat or at Ground Zero in New York, and then present those flags to Gold Star families. (Photo courtesy Pat McCauley) 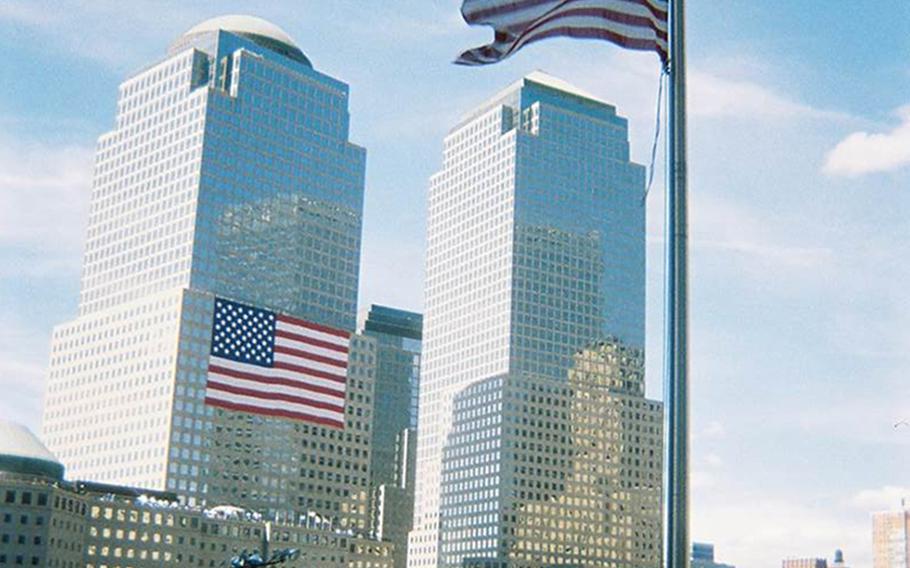 In the foreground, a flag flown at Ground Zero in New York will be given to a Gold Star family or the family of a 9/11 first responder, courtesy of firefighters in Chicago and New York. (Courtesy of Patrick McCauley)

WASHINGTON — Thirty American flags are flying Wednesday at New York’s Ground Zero memorial that tie together the heroism of first responders who died there 12 years ago with the sacrifices of military members who’ve since given their lives in battle.

The flags, previously flown by military members in Afghanistan, will be distributed in coming weeks to Gold Star families — families who’ve lost a servicemember in war — as well as to some fellow military unit members of those who died in battle. Others honor civilian responders who died in the World Trade Center attack.

Each is emblazoned with a name, and intended to serve as a permanent reminder of former loved ones and colleagues who gave all.

The flag distribution plan took shape in the minds of the members of a group of New York and Chicago firefighters and combat veterans who call themselves the McCarthy Group. It’s named for a Joseph Jeremiah McCarthy, a famous Chicago fireman and ambulance superintendent who received the Medal of Honor for Heroics in the Battle of Okinawa in the Second World War.

“We’re just a group of about 20 guys who came together after 9/11, plus the mothers of some sons who are deployed,” said Patrick McCauley, a Chicago Fire Department lieutenant who also serves in the Illinois Air National Guard. “Last year we managed to fly 10 flags, and this year we’re doing 30.”

McCauley, 50, an Air Force technical sergeant who controls the refueling booms on KC-135 tanker aircraft, will deploy again to the Middle East in 2014. He and the other McCarthy Group members are trying to build a larger network of servicemembers to help fly the flags, and he said he plans to bring a bigger load of flags home on his next deployment.

“We want to give them to any family that would want one,” he said. “There are kids that died years ago… and the families who are getting the flags are really happy that someone is honoring them today.”

McCauley invited Gold Star family members who would like a flag flown in honor of a servicemember to contact him by email at Mcboom8@aol.com. He said the group would also accept donations of flags or money to help purchase them.