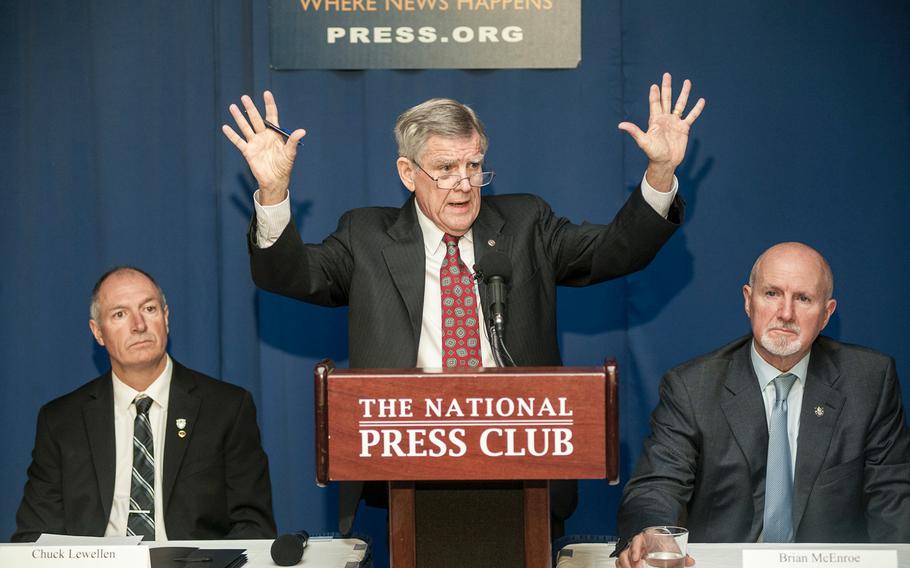 Buy Photo
James Moriarty, Sr., holds up his hands during a National Press Club event in Washington, D.C., on Tuesday, March 7, 2017, as he demonstrated how his son, Staff Sgt. James Morarity called for help as a Jordanian military officer fired upon him and two other Green Berets who died in the Nov. 4, 2016, incident in Jordan. (Carlos Bongioanni/Stars and Stripes) 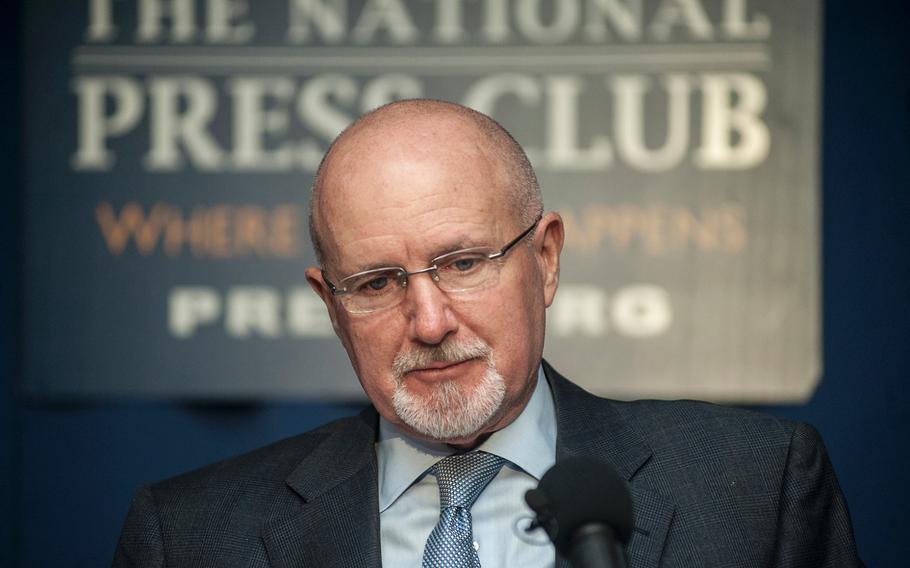 Buy Photo
During a National Press Club event in Washington, D.C., on Tuesday, March 7, 2017, Brian McEnroe, recounts the events leading up to the death of his son Staff Sgt Kevin McEnroe, who was one of three Green Berets killed in Jordan on Nov. 4, 2016. (Carlos Bongioanni/Stars and Stripes) Buy Photo
Rep. Ted Poe, R-Texas, speaks during a briefing at the National Press Building in Washington, D.C., on Tuesday, March 7, 2017, after hearing of the events leading up to the shooting deaths of three Green Berets in Jordan on Nov. 4, 2016. (Carlos Bongioanni/Stars and Stripes)

WASHINGTON — The fathers of three Green Berets killed in Jordan in November declared Tuesday that, in the wake of Army and FBI investigations, they believe their sons were murdered by a Jordanian soldier standing guard outside the air base where they were staying during their deployment.

Their fathers, Charles Lewellen, James R. Moriarty and Brian McEnroe, said a video of the incident and forensics investigations by the FBI and the Army show their sons had followed procedure and the guard shot at them without warning.

The fathers called on Jordan to be held accountable for the slayings, saying the Army investigation exonerated their sons of any wrongdoing and made clear that accounts carried in the Jordanian news reports and by Jordanian officials were false.

“Over four months have passed since our boys were murdered,” Brian McEnroe said. “None of our families has heard any apology, condolences or explanation from the Jordanians other than these false narratives - insulting false narratives. And in my mind, Jordan is, at the very least, guilty of complicity in the murder of these three American brave servicemen.”

The three Green Berets from the Fort Campbell, Kentucky-based 5th Special Forces Group, were on a training mission in Jordan. They were returning to the air base when the guard at the gate opened fire on their convoy, killing the three and injuring a fourth Green Beret.

The three fathers said Tuesday that they received a briefing last week from the investigating agencies and they watched the video that showed the sequence of events.

The Army Special Operations Command released its investigation Tuesday, following the news conference. The investigation said the soldiers acted properly and with valor and reports of any wrongdoing on their part were not true.

“There is no evidence that substantiates post-incident allegations and speculation that alcohol was involved, the Special Forces soldiers were not complying with established procedures for entering the gate or the Americans were the first ones to fire their weapons,” the report states.

The report also states an FBI investigation was still probing whether there was any criminal action involving the Jordanian guard. The FBI declined to comment on the deaths because it is an ongoing investigation.

During their news conference, the fathers described the incident in detail.

There were four cars in the convoy that approached the first gate and as they did, Jordanian soldiers moved the spike strips from the road and raised the gate, allowing the convoy to continue toward the checkpoint a few yards away. The second gate was alongside a concrete guard shack in the center of the road that was covered with camouflage netting, making it difficult to see inside. Jordanian soldiers lifted that gate as well, allowing the first car in the convoy to pass through without incident.

Lewellen and McEnroe were in the next vehicle. As it passed by the shack, the guard inside the shack unleashed a hail of bullets from behind the netting, killing McEnroe instantly. Lewellen was mortally wounded, according to the report.

“There was no warning for my son, Sgt. First Class Lewellen or Staff Sgt. McEnroe,” Charles Lewellen said. “They were simply murdered by an ally officer of the Jordanian Army.”

Moriarty and another Green Beret were driving the next two vehicles. Each jumped out of their truck and took cover at some nearby concrete barriers. They tried to talk to the Jordanian soldier while motioning to the other soldiers around them, with whom they’d been working that morning, Moriarty’s father said.

“Six more Jordanian gate guards then chose to do nothing to stop the assault,” Moriarty said. “Jimmy calls out in Arabic, ‘We are Americans. We are friends.’”

The exchange – first of words and then of more gunfire – went on for at least six minutes, but Abu Tayeh opened fire again, killing Moriarty before the fourth Green Beret was able to shoot him, Moriarty’s father said.

“My son is seen on the video signaling,” he said. “And that’s how I watched my son die.”

The fathers said reports in the Jordanian media and by the government suggested, at first, that the U.S. soldiers had charged the gate. Subsequent reports from Jordan stated one American had accidentally discharged his weapon in the vehicle. Later, Abu Tayeh along with other Jordanian soldiers later told investigators that he heard a loud noise.

But the fathers said those accounts are not true and the Army report found “there is no evidence of shots fired or loud noises prior to the alleged shooter engaging vehicle. There was no weapons training or demo training in the vicinity. None of the local military force was involved in any training that could be attributed to a loud bang.”

Dina Kawar, the Jordanian ambassador to the United States, in a written exchange with Rep. Ted Poe, R-Texas, wrote that Jordan is committed to fighting terrorism alongside the United States and the shooting “saddened every Jordanian.” Kawar later wrote the joint Jordanian-American investigations confirm the absence of “terrorist motives” or “premeditated intentions by M’aarek Abu Tayeh,” who had 14 years of service and more than a decade working frequently alongside Americans.

The guard, she said, responded according to rules of engagement after hearing what he thought was a gunshot near the main entrance to the base “and the subsequent belief of an ongoing attack.”

“The incident was a tragic accident devoid of any terrorist or holistic motives or premeditated act towards the friendly U.S. side,” Kawar said, offering condolences from her country.

But the fathers said that with the changing narrative from the Jordanians, along with too many unanswered questions, things didn’t add up. A second soldier who was supposed to be in the guard shack had gone to use a restroom, leaving Abu Tayeh alone after the third soldier went out to lift the gate. Other Jordanian soldiers not only failed to come to the assistance of the Americans, soldiers who had driven up to the area fired warning shots at a U.S. truck that came up behind them, preventing the Americans from moving forward to assist their comrades in trouble.

Lewellen pointed out that Abu Tayeh left the safety of his guard shack and pursued Moriarty and the other American soldier. Moriarty and McEnroe noted the guard let the first truck through and within seconds was firing at the second truck. He only would have been able to do so if his weapon was primed and ready, he said.

“I feel there was murder and he should be charged,” Moriarty said.

He called on the United States to halt its foreign aid to Jordan.