The family of 2nd Lt. Alexander "Sandy" Nininger Jr., World War II's first Medal of Honor recipient, is suing the U.S. government for the second time in an attempt to force a DNA test on an unknown set of remains buried in the Philippines that could belong to the celebrated war hero. (Courtesy of John Patterson)

The family of 2nd Lt. Alexander "Sandy" Nininger Jr., World War II's first Medal of Honor recipient, is suing the U.S. government for the second time in an attempt to force a DNA test on an unknown set of remains buried in the Philippines that could belong to the celebrated war hero. (Courtesy of John Patterson) The family of Army Pvt. Robert Morgan has joined a lawsuit, along with six other families, seeking the disinterment, DNA testing and identification of remains. Morgan survived the Bataan Death March but later died at the Cabanatuan Prisoner of War Camp in Luzon. (Courtesy of the Morgan family) 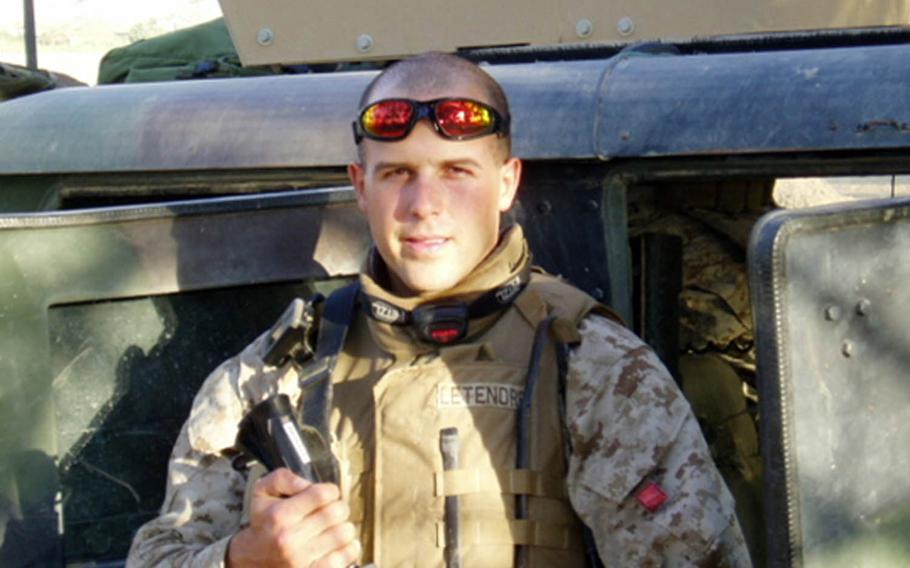 Lawyer for the plaintiffs Ben Letendre of Wisconsin's Cross, Jenks, Mercer and Maffei is a former Marine and a combat veteran. Here he is on the ground in Fallujah, Iraq, in 2005. Letendre took up the Nininger case pro bono due to his shock over what he says has been happening at DPAA. (Courtesy of Ben Letendre) 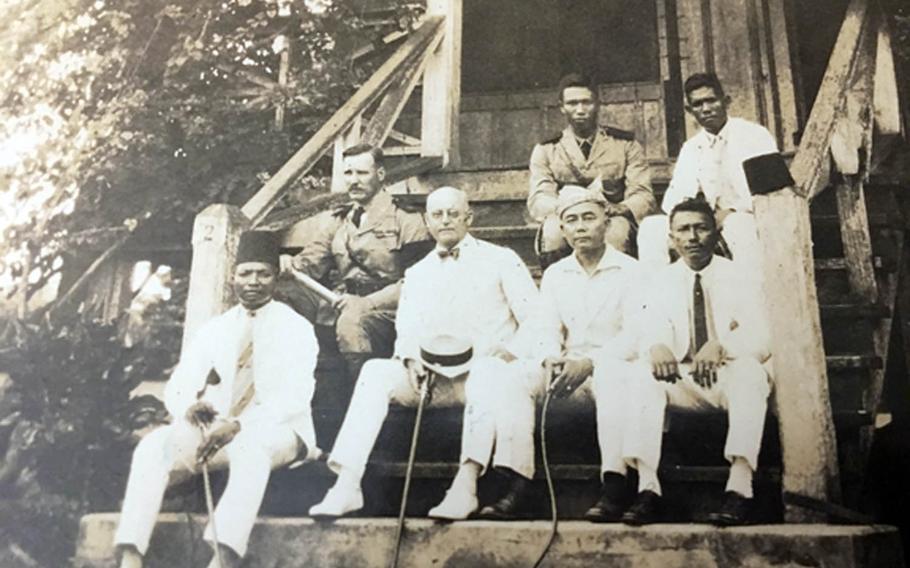 Army Brig. Gen. Guy Fort, second from left, commander of the 81st Division (Philippines) and later guerrilla forces, is the only American-born general officer to be executed by an enemy. Fort's family is one of seven suing the U.S government for exhumation, DNA testing and identification on unknown remains buried in American cemeteries. (Courtesy of the Fort family) The family of Army Pvt. 1st Class David Hansen, far left, has joined a lawsuit, along with six other families, seeking the disinterment, DNA testing and identification of his remains. Hansen survived the Bataan Death March but later died at the Cabanatuan Prisoner of War Camp in Luzon. (Courtesy of the Hansen family)

The family of World War II’s first Medal of Honor recipient is once again suing the U.S. government in an attempt to force a DNA test on an unknown set of remains buried in the Philippines that evidence suggests could belong to the celebrated war hero.

Relatives of Army 2nd Lt. Alexander “Sandy” Nininger Jr., who died fighting the Japanese in the Philippines in the opening weeks of the war, are one of seven MIA families that filed suit in District Court in San Antonio Thursday. The families say they have strong evidence as to the locations of their still unidentified family members and are suing for disinterment, DNA testing and identification.

The defendants in the suit include the beleaguered Defense POW/MIA Accounting Agency, its acting director Fern Winbush, the Defense Department, Secretary of Defense Jim Mattis, the American Battle Monuments Commission and its acting secretary, Rob Dalessandro.

“The DPAA is directed by statute; it’s not optional,” said lead attorney for the plaintiffs, Ben Letendre of Wisconsin’s Cross, Jenks, Mercer and Maffei. Letendre is a former Marine combat veteran who took the case pro bono due to his shock over what he says has been happening at DPAA.

“They have to undertake diligent efforts to identify and repatriate the remains of fallen servicemembers, and they’re also required by statute to communicate with the families. And as far as I can tell, that’s just not happening.”

Lawyers for the plaintiffs say they might seek a class action suit to force the government to pursue a DNA-led system of identification of all unknowns buried in American cemeteries should they fail to act. They are also demanding that DPAA communicate properly with families of the fallen.

After an internal review called the agencies “acutely dysfunctional,” then-Defense Secretary Chuck Hagel ordered a reorganization of the two agencies in 2014.

The agencies were merged but none of the problem employees were fired though some were reassigned. For the next two years, despite the fresh start, complaints have persisted.

DPAA officials did not respond to requests for comment.

Uncommon valor Nininger died Jan. 12, 1942, while charging into enemy territory alone and engaging in vicious hand-to-hand combat with Japanese invaders near Abucay, Bataan, according to his Medal of Honor citation. Despite being wounded, he managed to destroy several enemy foxholes, killing groups of enemy soldiers and snipers.

After the position was retaken, Nininger’s body was found with a dead enemy officer and two dead enemy soldiers, the citation says. He was buried at a church near where he died.

After the war, the bodies of the American troops buried in the makeshift cemetery were recovered but the young West Point graduate was never officially identified.

A file for the unknown remains of X-1130, which came from the cemetery and are now buried in Grave J-7-20 in Manila, states that “no other unknown could be positively associated with Lt. Nininger” aside from that particular set of remains. “The identification data for all the other Abucay unknowns, most particularly those recovered from the immediate vicinity of the Abucay church, were carefully screened with unfavorable results.”

The remains were recommended for identification as Nininger five times, according to the complaint, but the identification was halted by a height discrepancy that family members say has been debunked.

Government records indicate that a set of remains from the church were incorrectly buried at West Point as 1st Lt. Ira Cheaney Jr. Nininger’s name was floated in the file because they came from the church and have not yet been identified. Researchers believe, however, that the preponderance of evidence suggests he is still in Manila.

Nininger’s family has sought identification of the remains in Manila four times, said his nephew John Patterson, a former Rhode Island state senator. They have been denied each time.

Believing they had no other option, Patterson joined an ongoing lawsuit against the newly formed DPAA in January 2015, but the suit was dismissed a short time later after the original plaintiff was legally successful in his fight against the government.

“It mystifies me and it’s very disappointing but I tend not to give up,” Patterson said. “You have this intransigence [at DPAA] that just doesn’t go away and I know we’re going to run into it again.”

Patterson plans to have Nininger buried at Arlington National Cemetery if they are successful.

The plaintiffs The other plaintiffs in the suit include Doug Kelder, nephew of Army Pvt. Arthur “Bud” Kelder, who survived the Bataan Death March in April 1942, but succumbed to malaria, pellagra and diphtheria Nov. 19 at the Cabanatuan Prisoner of War Camp in Luzon.

Kelder’s family made headlines when they sued JPAC in 2012 after tracing his remains to an unknown grave in Manila. Following denials and a protracted fight, the government finally acquiesced, just as Patterson and others also jumped onboard.

In August 2014, JPAC exhumed the unknown remains in Manila, performed DNA testing and confirmed they belonged to Kelder.

But Kelder’s family was not satisfied, they told Stars and Stripes at the time. They received only three long bones and a skull. The vast majority of Kelder’s remains were left unidentified in the government’s possession.

Kelder is suing for the rest of his uncle’s remains.

Janis Fort is suing for the exhumation, DNA testing and identification of her grandfather, Army Brig. Gen. Guy Fort, commander of the 81st Division (Philippines) and later guerrilla forces, the complaint states. Fort was captured in September 1942 and executed by the Japanese in retaliation for attacks on their forces, making him the only American-born general officer to be executed by an enemy.

The execution and burial were witnessed by a provincial governor who directed recovery of the remains at the end of the war. The remains, known as X-618 Leyte #1, are reportedly buried in Grave L-8-113 in Manila.

John Boyt is suing for the exhumation, DNA testing and identification of his grandfather, Army Col. Loren Stewart, commander of the 45th Infantry Regiment, Philippine Scouts, the complaint states. Stewart was killed a day after Nininger and buried near Abucay Hacienda, Bataan.

Records indicate these remains were recovered and can be traced to Manila but were not identified due to misspelling his last name as “Stuart” on a request for his dental records.

Records indicate Stewart is buried as an unknown in Grave N-15-19 in Manila.

The final three plaintiffs are suing for the remains of their loved ones also buried as unknowns in Manila.

A class action The suit filed Thursday was born out of the identification of Kelder in 2015. Though the family had some of Kelder’s remains, they wanted at least a majority of them. The long fight and questionable ID left a bad taste in their mouth.

Likewise, Patterson had come close, only to see his case dropped.

The families banded together and brought in others with compelling cases, Kelder relative John Eakin said. The families also sought help from successful MIA investigator and founder of the nonprofit PFC Lawrence Gordon Foundation, Jed Henry.

A mutual friend put Henry in touch with Letendre, who decided to take up the case after Henry explained the situation to him and introduced him to the families, Letendre said.

“I remain objective as a lawyer but as a veteran, I have an emotional reaction,” he said.

The Nininger family “has been trying to get their son, their uncle, back here for the better part of 70 years. I think it is shameful that it’s taken that long.”

Letendre has a decade of service in the Marine Corps, from 1997 to 2007, departing as a captain. The Huey pilot and forward aircraft controller deployed to Afghanistan in 2004 and Iraq in 2005, where he participated in the battle of Fallujah attached to ground reconnaissance forces.

After he got out, the Minnesota native attended law school at the University of Wisconsin. Three years ago, he started a veteran’s law practice specializing in representing veterans who have incorrectly been denied disability compensation from the Department of Veterans Affairs.

He said he was floored when Henry explained to him what was going on at DPAA.

“I don’t think much has changed at all,” he said of post-reorganization DPAA. “This is a really pervasive problem. I don’t want to ascribe any ill will towards the government; I think it’s more incompetence and inefficiency,” he said. “But there’s something broken.”

He said that if they are successful, and a judge orders DPAA to comply with statutory obligations, he hopes America’s political leadership will lead the way to make DPAA function properly once and for all. If not, he said they plan to file a class action lawsuit on behalf of thousands of families awaiting answers to force the government into the fullest possible accounting by forging ahead with a DNA-led ID system. This would see all unknowns systematically disinterred from American cemeteries around the globe and DNA samples taken. They would then be compared with family reference samples in a database. Currently, DPAA has an anthropology-led system that only DNA tests when there is a presumptive ID. It is slow and ineffective, Letendre said.

“This is the perfect case that demonstrates how tough it is for a lot of these families,” Henry said. “If the family of a Medal of Honor recipient, who has very good evidence, can’t get a DNA test, who can?”