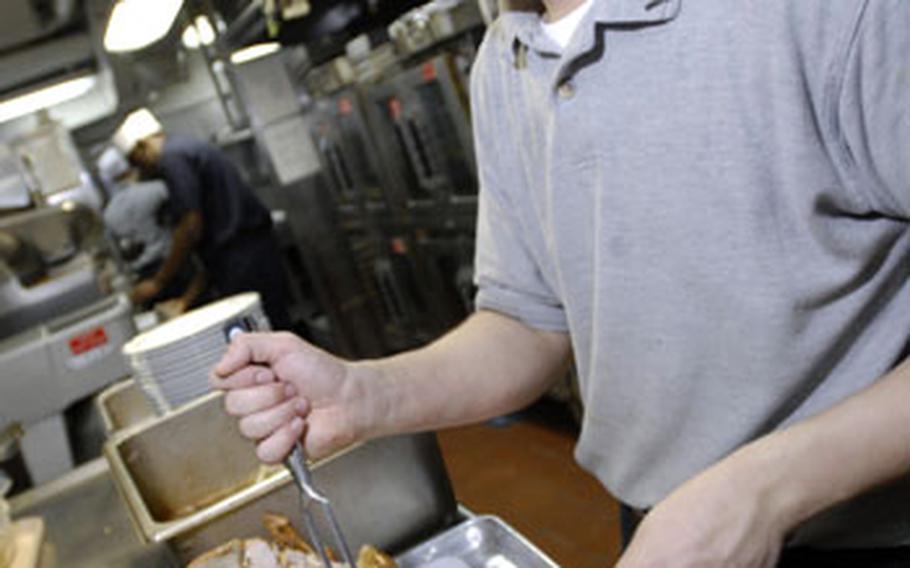 Petty Officer 3rd Class Borey By, 22, of Altaloma, Calif., slices turkey Thursday for Thanksgiving dinner on the USS Kitty Hawk. The carrier was scheduled to make a four-day stop in Hong Kong for the holiday, but the Chinese government denied the Kitty Hawk and other Navy vessels entry. (Kyle D. Gahlau / Courtesy of U.S. Navy)

On Wednesday, the Chinese government denied the aircraft carrier, four ships with the carrier&#8217;s strike group and a nuclear-powered sub entry for a pre-arranged four-day visit, according to Cmdr. Jensin W. Sommer, the spokeswoman for Carrier Task Force 70, which includes the Kitty Hawk.

The Chinese government subsequently changed its mind, but by then it was too late. The ships were farther out at sea, and bad weather behind them prevented another U-turn back to Hong Kong, Sommer confirmed by e-mail on Friday.

That left several hundred friends and family members in Hong Kong without a Thanksgiving-weekend reunion with sailors.

Cmdr. Laura Yambrick, who works for Commander, Naval Forces Japan, had gone to Hong Kong with her two children to meet her husband, who works on the Kitty Hawk. By Friday night, she and her children, Phillip and Amelia, were back at Yokosuka.

Yambrick said she and other more experienced wives helped the younger ones cope. They were with a group of about 20 and tried to make the best of the situation.

Suzanne Zecchin, wife of the Kitty Hawk&#8217;s commander, Capt. Todd Zecchin, said she and her friends got in touch with each other with their husbands&#8217; help. Zecchin, Yambrick and others ended up having an impromptu Thanksgiving meal together.

But it wasn&#8217;t positive for everyone. In some cases, those families and friends found themselves paying for hotel rooms at higher rates because the cheaper, block-rates for the sailors had been canceled.

Some people who arrived late in Hong Kong on Wednesday night may have been charged a higher hotel rate than the one offered through MWR, Lt. Bill Clinton, the carrier&#8217;s spokesman, wrote in an e-mail Friday night. All of the hotels should have honored the MWR rate for subsequent nights, he wrote.

The contractor who helped arrange the rooms is trying to negotiate with the hotels to reduce the rates for that first night, he added, though that could take time.

&#8220;We will encourage sponsors who booked their rooms through MWR to talk to family members who did have an issue with their room/reservation to let MWR know that this happened,&#8221; Clinton wrote. &#8220;They will work to resolve the issue.&#8221;

On board the Kitty Hawk on Thursday, servicemembers were able to enjoy a holiday meal, Sommer wrote.

&#8220;The Kitty Hawk Supply Department did a great job today responding with short notice to provide a traditional Thanksgiving meal,&#8221; she wrote.

&#8220;We are obviously disappointed,&#8221; Sommer wrote about the change of plans. &#8220;However, schedule changes are always a part of operational life at sea, and are not entirely unexpected. We are now focusing our attention on our current operations, including a safe transit in poor weather and rough seas, as we make preparations for our return to Yokosuka and our families.&#8221;

Other ships that were initially refused entry into China included the USS Shiloh, the USS Fitzgerald, the USS McCampbell and the USS Mustin. The Los Angeles-class nuclear fast-attack submarine USS Topeka also was due to enter port with the group.

The decision to bar entry marked the second time in a week that China refused to let U.S. Navy ships into the port, The Associated Press reported. Two U.S. minesweepers seeking to refuel and take shelter from bad weather in the South China Sea had asked for permission to enter Hong Kong three or four days before the Kitty Hawk, the report said.