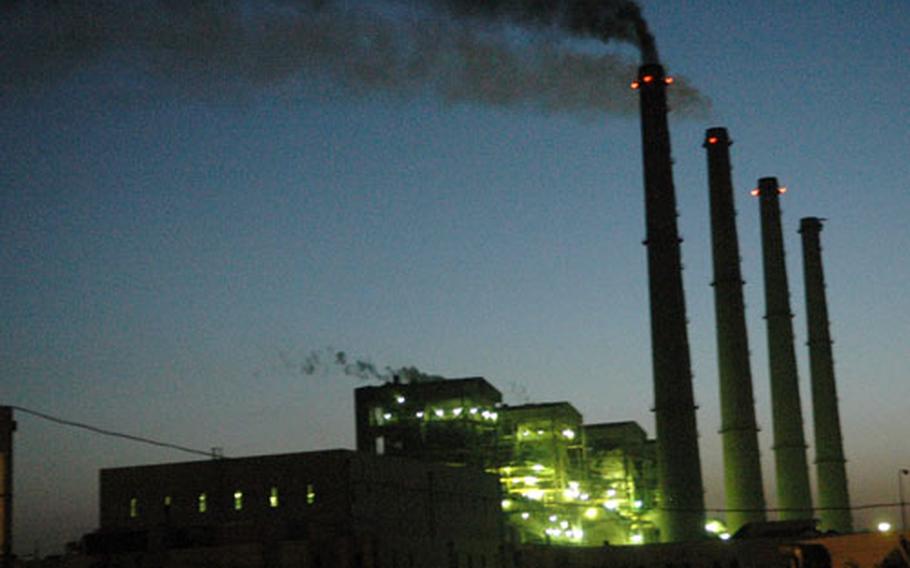 The Musayyib power generating plant, which is part of Forward Operating Base Iskandariyah, has long operated at roughly one third of its design capacity due to poor maintenance and upkeep, say U.S. military commanders. (Monte Morin / S&S)

The Musayyib power generating plant, which is part of Forward Operating Base Iskandariyah, has long operated at roughly one third of its design capacity due to poor maintenance and upkeep, say U.S. military commanders. (Monte Morin / S&S) 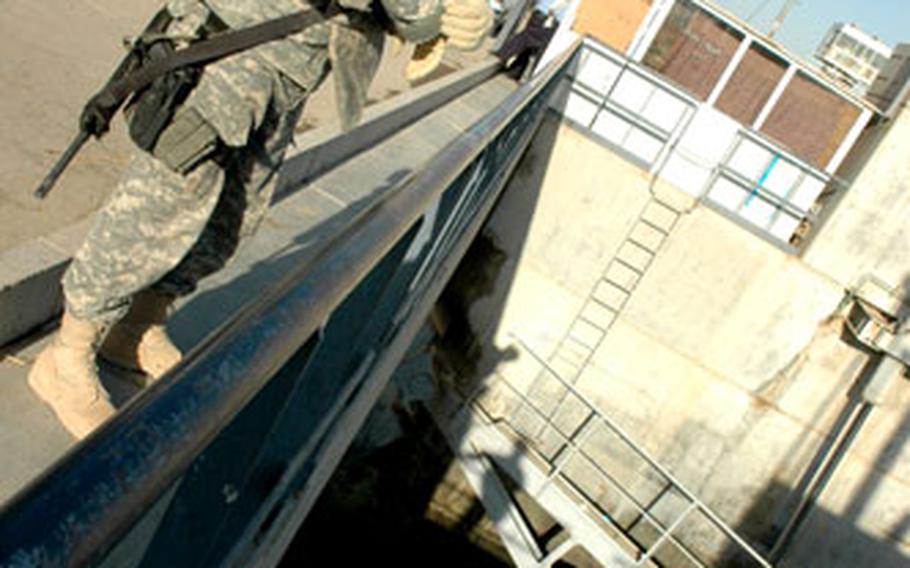 Lt. Col. Dale Johnson, of the 412th Engineering Command, inspects a hydroelectric dam on the Euphrates River in the town of Seddah recently. (Monte Morin / S&S) MUSAYYIB, Iraq &#8212; For the American soldiers and local Iraqis who live in the shadow of an aging electrical power plant, the single, enormous plume of smoke that billows from just one of the facility&#8217;s four towering smokestacks is a constant reminder of both the promise and disappointment of electrical power in Iraq.

&#8220;When the coalition showed up in 2003, most people imagined they would fix the problem in two or three months,&#8221; said Jawad Abed Al-Kadoom, editor of the Aroos Al-Furat newspaper in Musayyib. &#8220;Right now, people are very disappointed.&#8221;

For Lt. Col. Patrick Donahoe, commander of the 1st Battalion, 67th Armor Regiment, 2nd Brigade, 4th Infantry Division, the disappointment that Iraqis complain of is particularly pointed. Donahoe and his troops live within the sprawling power plant facility and are responsible for protecting the facility and shepherding improvements there.

A quick look around Forward Operating Base Iskandariyah, where the Musayyib plant is located, will give observers an idea of the challenge facing engineers and power officials here. The base is filled with all manner of abandoned and rusting equipment &#8212; enormous turbine fans, cooling rods and pipes large enough to drive a car through. The slag piles give a clear indication of the neglect the facility suffered in the years leading up to the fall of Saddam Hussein.

&#8220;Just take a look at this place. It&#8217;s like something out of &#8216;Mad Max,&#8217; &#8221; Donahoe said, referring to the series of movies set in a world of ruin and exhausted natural resources. Donahoe said the degraded state of Iraqi electric-producing facilities has been the primary hurdle to increasing electrical production.

Much of that gap has been made up for with small, gas-powered generators that many Iraqis own, but increasing fuel prices are causing more and more families to shut the devices off.

In Musayyib, commanders have great hopes for a new, $100 million jet turbine power plant being built on the base. The plant, which uses four 747 jet engines, will produce another 600 megawatts of power. The facility is 95 percent complete, Donahoe said.

At the same time, officers with the Army Corps of Engineers and the 412th Civil Affairs Battalion are hoping to find money to make upgrades to the nearby Seddah hydroelectric plant, a dam on the Euphrates River. The dam is capable of producing 16 megawatts of power, but produces only one megawatt currently due to a buildup of river silt that blocks the dam&#8217;s intake channels.

&#8220;Recently the minister of electricity was interviewed on TV and promised that the power situation would be better by 2010,&#8221; said a Musayyib City Council member through an interpreter. &#8220;Believe me, if this guy waits until 2010, you will see half the people in Iraq in the crazy hospital.&#8221;

During a recent visit with Musayyib City Council members, a company commander in Donahoe&#8217;s battalion was met with many complaints about lack of electrical power. One council member said that he believed the coalition forces were the greatest roadblock to power production in Iraq, while others said they had only a few hours of electricity a day &#8212; a claim that the company commander said was greatly exaggerated.

&#8220;To be fair, the electrical problem was much bigger than we thought or the Iraqi people realized,&#8221; said Capt. Irvin Oliver, commander of Company D, 1-67.