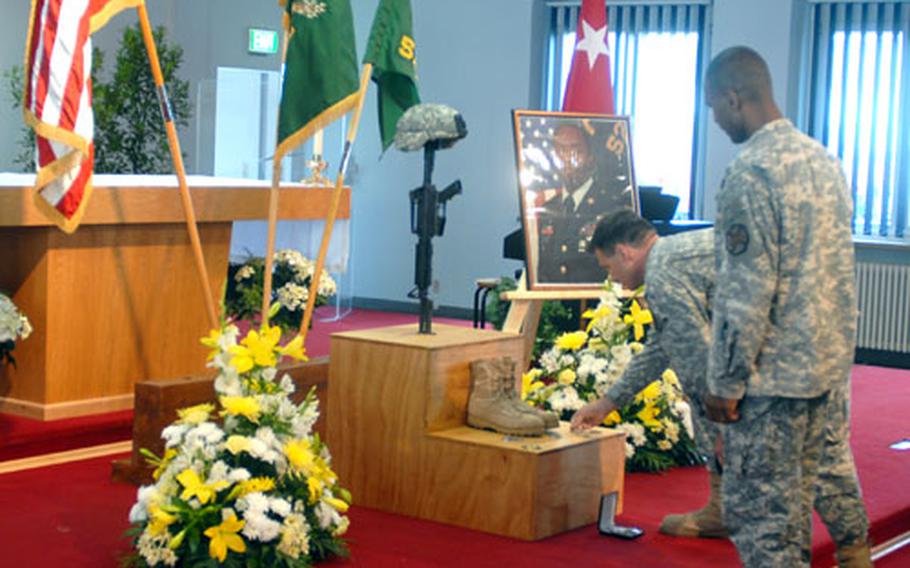 KATTERBACH, Germany &#8212; A soldier known as "Doc," who spent his life caring for others, was remembered Tuesday by fellow members of the 709th Military Police Battalion during a ceremony here.

The Army is investigating the death and officials would not comment Tuesday on what happened.

Military police, family and friends packed the chapel at Katterbach, where James had lived since October 2004.

Capt. Michael Capps, commander of the 527th Military Police Company, which James served with in Afghanistan, said, in remarks read at the ceremony, that it is too simple to blame his death on one thing.

"Why and how could this happen? Could this have been stopped?" he asked.

James deployed to Iraq as a combat medic in March 2003 and went to Afghanistan as a trauma specialist in February 2005. He left for his second tour to Afghanistan earlier this year.

"There is no doubt that the experiences he had on those deployments contributed to defining the man. What Sergeant James brought to us during his life was perfectly clear. He was a hero," Capps said.

Spc. Jacob Adams, another member of the 527th whose remarks were read at the ceremony, said James was one of his best friends.

"He had the ability to make friends with anyone," Adams said.

"There was a spark about him that drew people to want to be his friend. He truly cared about people and helping others."

James was an enthusiastic dancer, he recalled.

"He used to say he had a gift for dancing. It didn&#8217;t matter what kind of song it was, he would dance to it. The dance always looked the same to me," Adams said, adding that his friend was particularly fond of his mother, Jermaine Gumes, and 1-year-old son, Elijah. He is also survived by his wife, Eva, who is pregnant.

Ashley King, a former soldier who served with James, recalled how he took her to Landstuhl Regional Medical Center for an operation.

James wanted to watch the operation and her last memory, as she was being anesthetized, was of medical staff kicking him out of the operating room, she said.

James was under the misapprehension that he was a great driver, King added.

"I saw him go through two cars due to accidents. He always had an explanation about how it wasn&#8217;t his fault, but we all knew the truth," she said.

Another soldier who served with James, Pfc. Hetty-Mae Unciano, recalled the way he would greet everyone when he walked into a room.

"When I got to Ansbach I was nervous about going to my first duty station," Unciano said.

"Sergeant James saw right through that. He was caring. He was always willing to do more than his fair share."