Election 2006: It’s sooner than you think 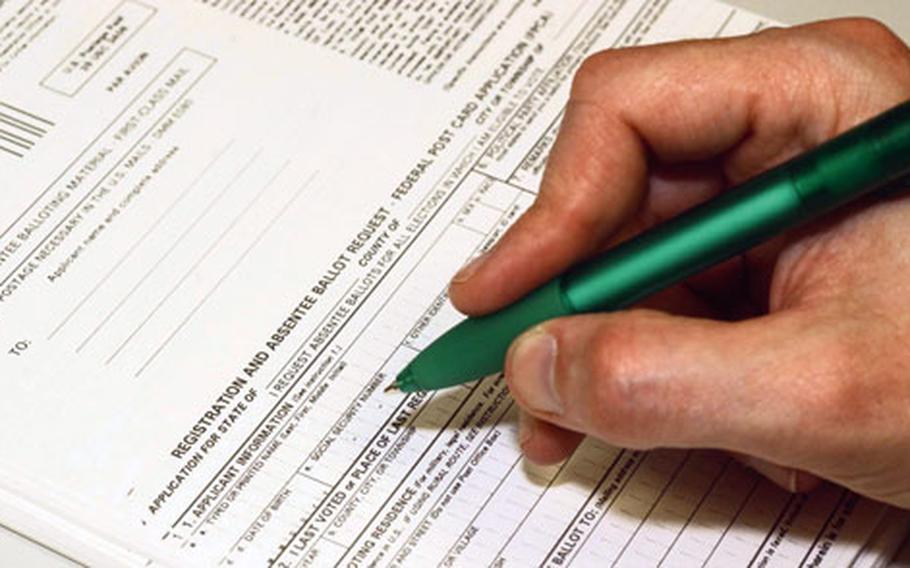 WASHINGTON &#8212; Troops overseas who want to vote in November need to start their paperwork this week, according to federal election officials.

While some states will allow voters serving abroad to receive and submit ballots up until the day before the election, many require citizens to request a ballot at least one month before voting day. This year&#8217;s midterm elections take place Nov. 7.

Officials have designated this week as Armed Forces Voters&#8217; Week, alerting U.S. forces overseas and their families that this is &#8220;the last really safe week&#8221; to submit a Federal Post Card Application for requesting a state ballot.

This year&#8217;s elections include 36 contests for governor, 33 U.S. Senate races and, as is the case every two years, each seat in the U.S. House of Representatives is up for grabs.

Military members submitting ballots from overseas have had mixed results in recent elections. A survey conducted by the FVAP following the 2004 presidential election suggested that 53 percent of all U.S. troops serving overseas requested, received and cast ballots in the contest.

But the National Defense Committee&#8217;s Military Voting Rights Project said their research found that 24 percent of all overseas ballots cast were not counted by local election officials. That was down from the 29 percent they found in 2000, but still &#8220;unacceptable,&#8221; according to their report.

According to its Web site, the National Defense Committee is a pro-military organization supporting a larger and stronger military and the election of more veterans to Congress.

FVAP personnel will distribute the post card application, which allows troops to request and absentee ballot, to all military personnel over the course of the next week, program officials said.

Wiedman said even troops with permanent overseas addresses who haven&#8217;t moved since the last election should touch base with their home state if they want to vote.

How to request a ballot

Check your state&#8217;s rules: 46 states provide voter services through e-mail or fax, but not all will accept a ballot request that way. A list of rules is available at www.fvap.gov.

Staff Sgt. Jennifer Manamea-Nelson fills out her Registration and Absentee Ballot Request at Rhein-Main Air Base, Germany, in 2004.

Check your state&#8217;s rules: 46 states provide voter services through e-mail or fax, but not all will accept a ballot request that way. A list of rules is available at [BOLDFACE]www.fvap.gov.Fill out the FPCA: The federal post card application, also available on the Web site, is used to alert state voting officials of address changes and contact information.Complete a cover sheet: FVAP has one available at www.fvap.gov/ services/ faxtransheet.pdf. Voters need to include their personal information as well as county election contact information on the sheet.Send the forms: The FVAP office has a list of fax numbers on its Web site, or forms can be sent via DSN fax to (312) 223-5527. By e-mail, forms should be sent to ets@fvap.ncr.gov.Mail a print copy: Program officials recommend sending a hard copy through the military postal system just in case.Contact your voting officer: Each unit has someone designated who should be able to help with getting the right paperwork and understanding state election rules. The voting assistance program&#8217;s site, www.favp.gov, also has additional information on those topics.Other sites to visit:

http://overseasvotefoundation.org &#8211; The group&#8217;s Registration and Absentee Voter Application provides an online menu guiding voters through the paperwork rules for each state, and produces a printable form voters can put in the mail to request their ballot.

https://www.votefromabroad.org &#8211; This site, run by Democrats Abroad, lets voters of any party complete a FPCA online and give information on where to send the completed form afterwards.

www.republicansabroad.com &#8211; The group provides state-by-state rules for voter eligibility and filing as well as downloadable forms.