Dustoff: It's no time for second-guessing 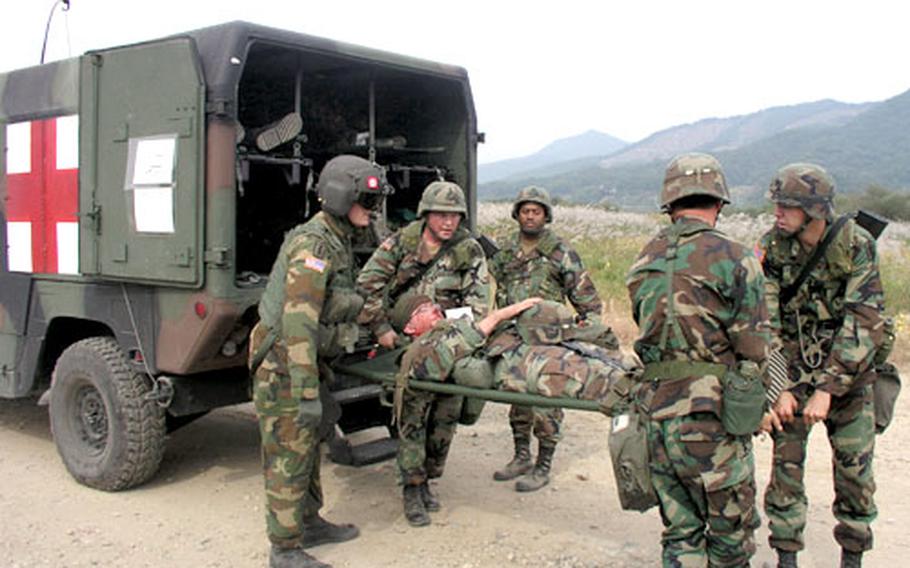 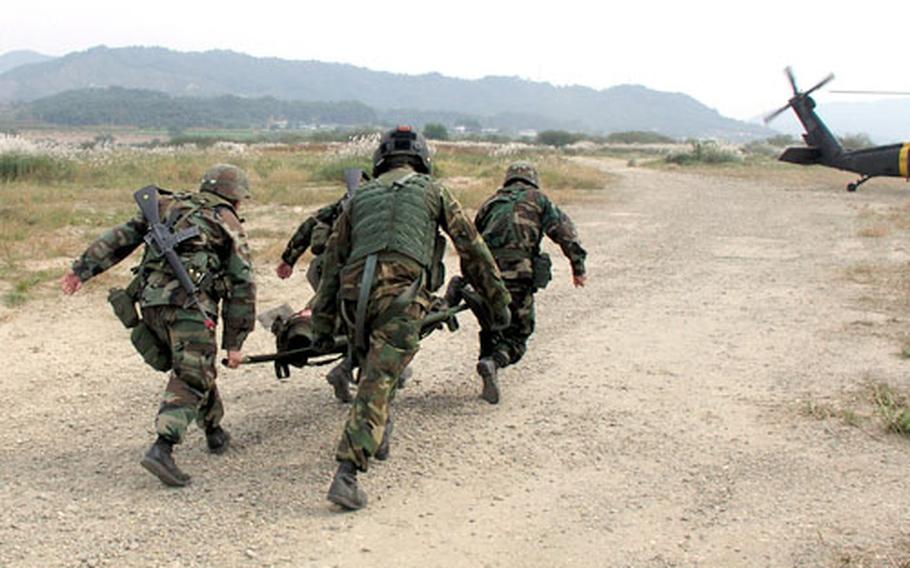 During a battlefield medical evacuation exercise in South Korea on Thursday, soldiers rush a battle casualty to a waiting dustoff helicopter that will fly him to a mock field hospital. The helicopter, Dustoff 3-6, is from the 377th Medical Company (Air Ambulance) out of Camp Humphreys in Pyongtaek, South Korea. (Franklin Fisher / S&S) 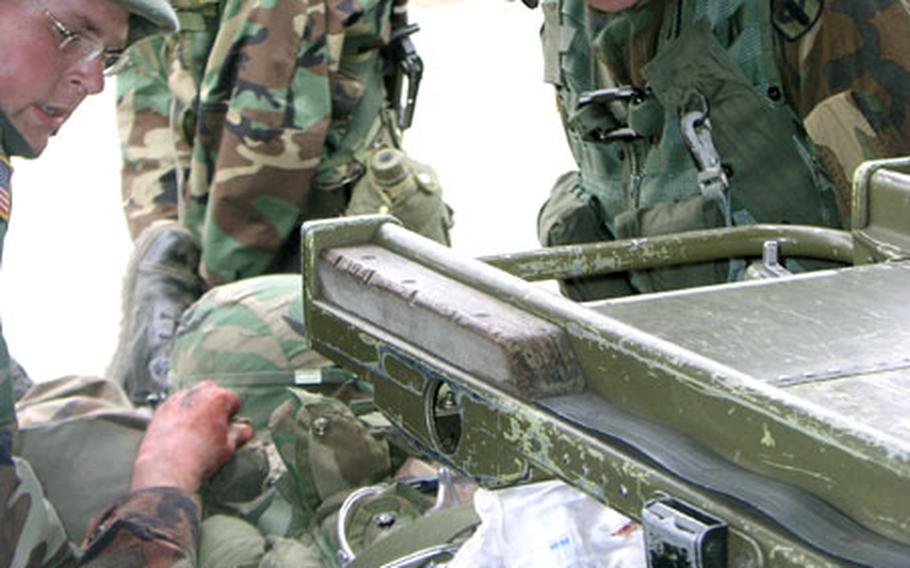 Soldiers load a mock battle casualty onto an Army medical evacuation helicopter. Participants in Thursday’s exercise said the training demonstrated that what awaits medevac crews on the other end of a launch isn’t always predictable. (Franklin Fisher / S&S)

JUNGWON, South Korea &#8212; The young soldier working the radio inside the operations tent Thursday heard the message coming in and got busy writing. &#8220;Attention in the TOC! Got a nine-line medevac,&#8221; he called out.

A unit in the field had four wounded soldiers who needed a medical evacuation helicopter to rush them to a field hospital for surgery or other treatment. &#8220;Nine-line&#8221; refers to a standard nine-item message format the military uses for medical evacuations and certain other radio transmissions.

The radio operator took down the information &#8212; the map location, the radio frequency of the unit asking for the pickup, information on the types of wounds and other things the helicopter crew would need to locate the wounded and try to keep them alive on the way to the hospital.

He handed a copy to the battle captain and had a carbon copy ready for the command pilot whose UH-60 Black Hawk helicopter would fly this latest &#8220;dustoff&#8221; mission.

The dustoff, a helicopter rescue of the wounded, became famous during the Vietnam War, when rescue pilots earned a battlefield reputation for unflinching devotion to getting the wounded out, often under heavy fire.

For the crew of Dustoff 3-6, from the Army&#8217;s 377th Medical Company (Air Ambulance), the latest mission on this gray, hazy afternoon was a training exercise being played out among the green foothills and rice paddies of central South Korea.

Based at Camp Humphreys, the company is part of the 52nd Medical Battalion, which is headquartered at Yongsan Garrison and handles medical evacuations by both ground ambulance and helicopter.

Within minutes of the alert, Dustoff 3-6 was lifting away from the rock-strewn battalion area, a brownish mass of camouflaged tents ranged along a sandy riverbank. On its sides the Black Hawk bore a red cross painted on a white square background.

Within a minute of the 1:35 p.m. takeoff, the Black Hawk banked sharply on its course, beating through the air at 220 mph. Below it passed long glimpses of rice plots, telephone poles, peach and grape farms, the occasional dirt or concrete road, farm houses and outbuildings with roofs of pastel blue or orange.

Less than three minutes after launching, Dustoff 3-6 spotted the ambulance with its four waiting wounded. The pilot set the Black Hawk down, weeds flailing or bent flat in the rotorwash.

But what crew members found was not what the nine-line had led them to expect. Instead of only two of the four soldiers needing litters, the two walking wounded were serious enough to need them, too. One&#8217;s entire arm had been nearly shot away, only a stump protruding from his shoulder. The other had broken ribs.

&#8220;It was one of those things where we had to make the call, either calling in another aircraft or just loading them on the aircraft and getting them out of there,&#8221; said Mudge.

Soldiers rushed their wounded buddies to the helicopter. The litter patients were set onto long metal racks inside the helo. The others sat.

In the air, Mudge tended the litter cases. One had a simulated head injury and sucking chest wound. The other had an &#8220;impaled object&#8221; protruding from his chest.

Fourteen minutes later, Dustoff 3-6 was back with the wounded.

&#8220;By the time you get to the scene, nothing is what you think it&#8217;s going to be. So thinking on your feet and being flexible is probably the most important thing about being a flight medic,&#8221; Mudge said.

Mudge has been an Army medic for nearly four years and he sees a big difference between flight medics and ground medics.

&#8220;I&#8217;d definitely say, having been a ground medic &#8230; they are two completely different worlds. I really feel flight medics in general have to have a more aggressive, tireless kind of spirit, just due to the nature of the job. Because it is a pretty rough atmosphere to try to work any kind of medicine in. The constant noise &#8230; Things like altitude. Just getting used to being on an aircraft.&#8221;

Brown sees dustoff as both exhilarating and rewarding.

&#8220;Our folks have to have an extremely dedicated focus on their mission,&#8221; said Maj. Brian D. Almquist, 377th Medical Company commanding officer.

&#8220;Every time we launch,&#8221; he said, &#8220;there is a life on the other end of the line that we already know is in trouble, that relies on our ability to get there in a timely and safe manner, and provide him with treatment, and get him to a medical facility that can further take care of his injuries or wounds.&#8221;