A view of the common area of the new Wiesbaden High School as seen from the school's third floor on the first day of the 2017-18 school year, Monday, Aug. 28, 2017. (Michael Abrams/Stars and Stripes) Wiesbaden High School students listen as teachers give them an orientation on the new school and the new school year, Monday, Aug. 28, 2017. It is the first 21st-century-designed school in DODEA, where ''neighborhoods'' surround a central hub. (Michael Abrams/Stars and Stripes) 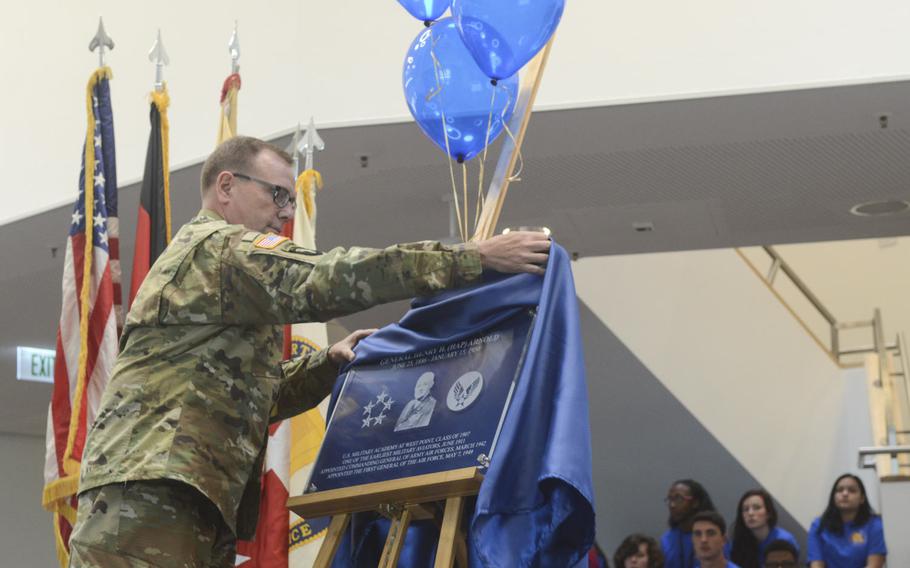 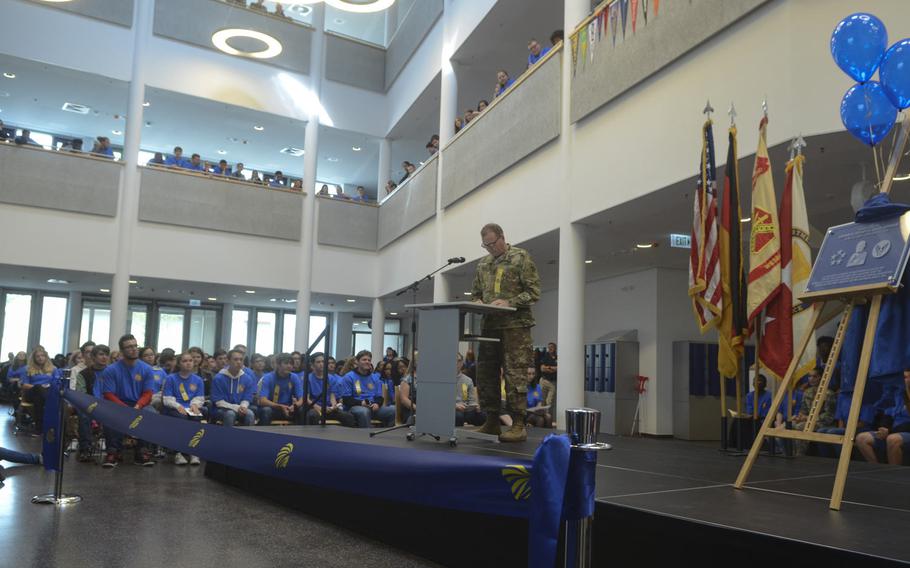 Lt. Gen. Ben Hodges, commander of U.S. Army Europe, speaks to students and faculty at the ribbon-cutting ceremony for the new Wiesbaden High School facility, on Wednesday, Sept. 13, 2017. The school is the first 21st-century facility in the Department of Defense Educational Activity. (Dan Stoutamire/Stars and Stripes) “What do we have? A 21st-century school,” said Thomas Brady, DODEA director, to the assembled students at the ribbon-cutting ceremony on Wednesday. “As you’ve already found out, with neighborhoods and collaboration with teachers, which will impact student achievement. You have openness, new technology, new labs, and more importantly you’ll be part of the teaching effort.”

The new school’s six neighborhoods, spaced among its three floors, consist of four studios, each where instruction occurs, and movable glass walls are able to accommodate any class size.

The system has proved to be effective, despite early misgivings, said Christopher Harbach, who teaches drama and journalism.

“We had some trepidation in the beginning, but it works. We thought we might be disrupting each other, but that wasn’t the case,” he said. “The school promotes a sense of flexibility and movement.”

Wiesbaden’s new facility is the opening salvo in an ongoing process to modernize schools across Europe. The Army Corps of Engineers-Europe District is overseeing $1.2 billion in projects in Germany and Belgium alone, accounting for more than 30 schools and 14,000 students.

“There’s no way any parent would bring their sons and daughters over to Europe if they didn’t think their children wouldn’t get a first-class education that would prepare them to go to college,” he said. “This high school, the first American 21st century high school, is directly connected to the strategic vision of the U.S. government.”

While much of the ceremony was a celebration of what the future holds, it also included a nod to the school’s past. Wiesbaden High School was known as General H.H. Arnold High School from 1949 until 2006, named after the first general of the Air Force when that branch was created in 1947. During the ceremony, Hodges unveiled a plaque officially dedicating the school to Arnold, though it will keep its current name.

Some of the key features of the 21st-century schools concept are energy efficiency, natural light and the use of recycled materials in construction. Nearly all of the school’s classrooms have large windows and views to the outdoors. An efficient sensor-based plumbing system will reduce water use by 40 percent, said project manager Steve Ross. In addition, a “green” roof, which is covered with grass and plants, will reduce the amount of rainwater emptied into the drainage system.

Six schools are currently under construction in Europe, while 13 more are in the design process. Ross said the next two to be completed — Kaiserslautern High School and Wiesbaden Middle School — will be open for the 2018-19 school year.