DODDS student out in 1st round of spelling bee 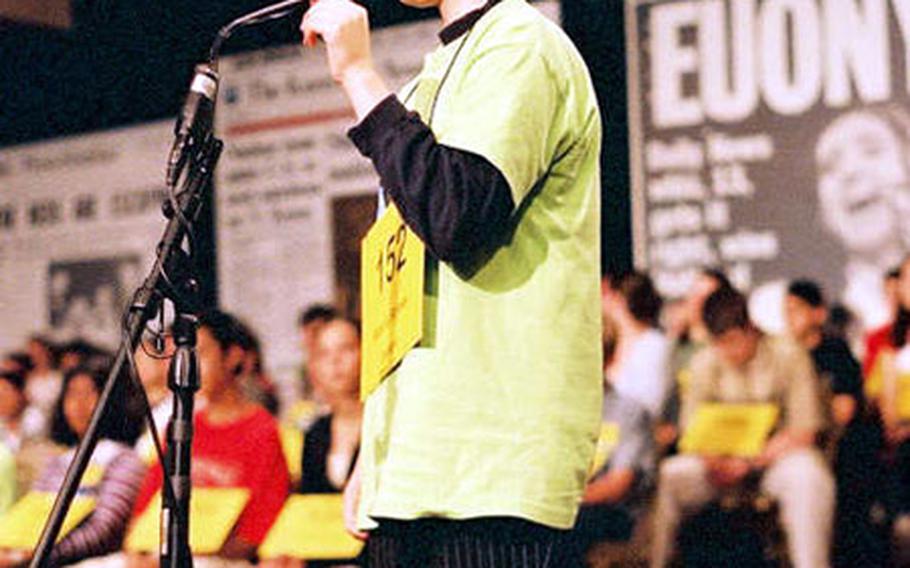 WASHINGTON &#8212; Kids marched to the microphone as the words were read off: Melittologist. Euryphogas. Serictery.

Some were words most adults may have heard in their lifetime: Cenotaph. Griot. But most were brutal by any standard.

A ding of the bell meant they had missed, and for them, the contest was over.

Dawn Anderson, the Patch Elementary School fifth-grader representing the Department of Defense school system, stepped up to the plate.

She asked the pronouncer to say it again.

Dawn asked for its language of origin (Greek), then for the definition (a fitting of dance to the content in a play).

She struggled, visualizing options as she traced spellings with her finger on her other hand. About a minute passed.

The luck of the draw on words had clearly not been with her.

The 11-year-old from Patch in Stuttgart, Germany, was disappointed but not defeated as she left the room in the company of of her father, Air Force Maj. Christopher Anderson.

She only had since her victory in the Europe regional finals April 19th to really prepare. That event had been delayed &#8220;because of force protection issues at the time,&#8221; her father said.

But she knew she&#8217;d already accomplished something special. Her friends won&#8217;t let her think otherwise.

The most common request? Supercalifragilisticexpealidocious, of course.

Is this the end of a great spelling career? No, she said.

Dawn and her father will tour Washington for a few days, then she&#8217;ll return to Germany for two more weeks of school and celebrity.

Stars and Stripes and the European Congress of American Parents, Teachers and Students annually sponsor the European competition. ECAPTS sponsored Dawn and her father for the D.C. event.