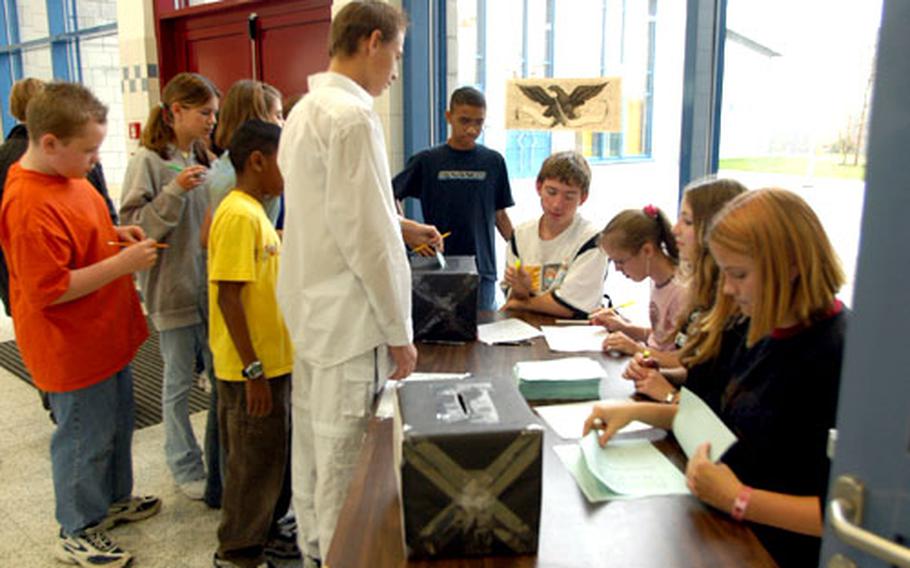 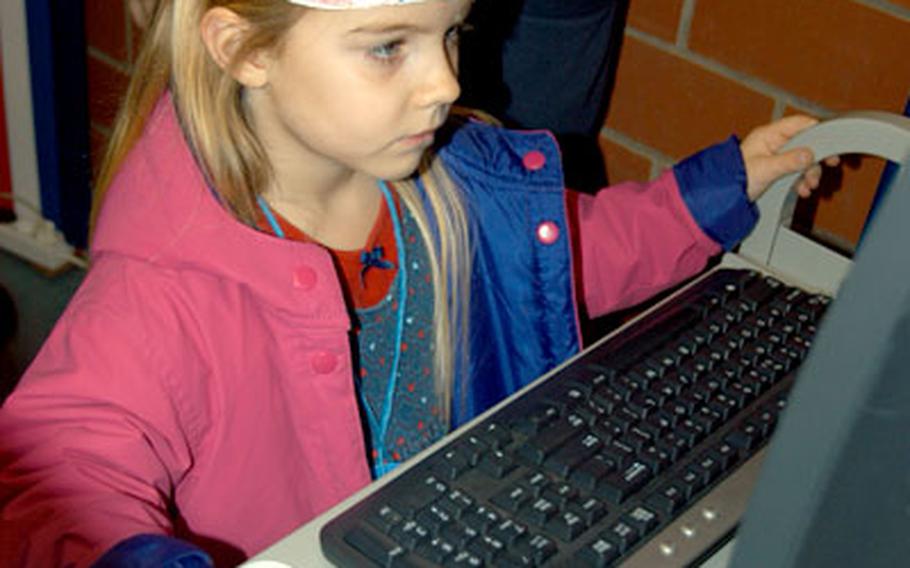 While President Bush and Sen. John Kerry may be neck and neck in presidential election polls, if it were up to pupils from Department of Defense Dependents Schools in Europe, Bush would win by a landslide.

Pupils from all grades in many schools in Europe have been participating in mock elections or other election week events. Votes at many of the participating schools put Bush ahead, some by margins of up to 2-to-1.

Of schools and districts contacted, only the Heidelberg District&#8217;s online voting program, which had 99 votes cast as of Thursday afternoon, had Kerry over Bush with 55 votes to 43, according to Juanita Harvin, an educational technologist from the district. Third party candidate Ralph Nader received one vote.

Many schools in the district also were holding their own elections with paper ballots, she said.

At Hohenfels Middle/High School, many students didn&#8217;t care who won, or voted for the candidate their parents backed.

&#8220;Kids really have to understand the importance of voting,&#8221; DeLaughter said.

Some of the children, like seventh-grader Janni Haws, participated in a debate held the morning of the mock election.

In elections held in the Kaiserslautern District, about 2,200 pupils had voted as of Wednesday. Bush was ahead at that time by a margin of 2-to-1, said Frank Nosal, a Ramstein Elementary School teacher who helped coordinate the district&#8217;s mock election.

The district organized election-related events in schools for about two weeks.

A mock election was held at Gen. H.H. Arnold High School in Wiesbaden on Thursday. At about 1 p.m. Thursday, Bush was leading, despite the number of students registered as Democrats outnumbering registered Republicans more than 3-to-1, according to Jan Meyers, who teaches government at the school.

Pupils and teachers at the middle and high schools in Mannheim have been voting in a national online vote sponsored by Youth Leadership Initiative, a national civic education program based at the University of Virginia Center for Politics. The stateside organization expects more than 1 million youths to cast votes during a two-week period.

Pupils at both schools also learned about the process of electing a president, the candidates and the issues. Middle school pupils studied political parties, the funding of elections, election issues and the election process. High school students focused on the complexities of the electoral college and conducted debates.

Sue Nehring, the Mannheim Middle School librarian who helped conduct the program, said it has been great for the pupils. She wrote in an e-mail, &#8220;They really seem to care about the election. We have stressed that the new president will have a great deal to do with decisions made about their lives, especially since most of the students have parents in the military.&#8221;

In Gaeta, Italy, Jim Coyle, a social studies teacher at the Gaeta American School, said that the polling went well for their 180 participants, especially since the voting was done online.

Coyle said that informally, it seemed that the eighth-graders were equally divided between Bush and Kerry, but the younger pupils leaned toward Bush.

&#8220;[Students are] actually having to think about an issue and apply it to themselves and prioritize [their decisions],&#8221; he said.

Whether pupils took the mock elections seriously or not, it certainly inspired them to think about the candidates.

Reporters Marni McEntee in Kaiserslautern, Germany, and Jason Chudy in Naples, Italy, contributed to this report.