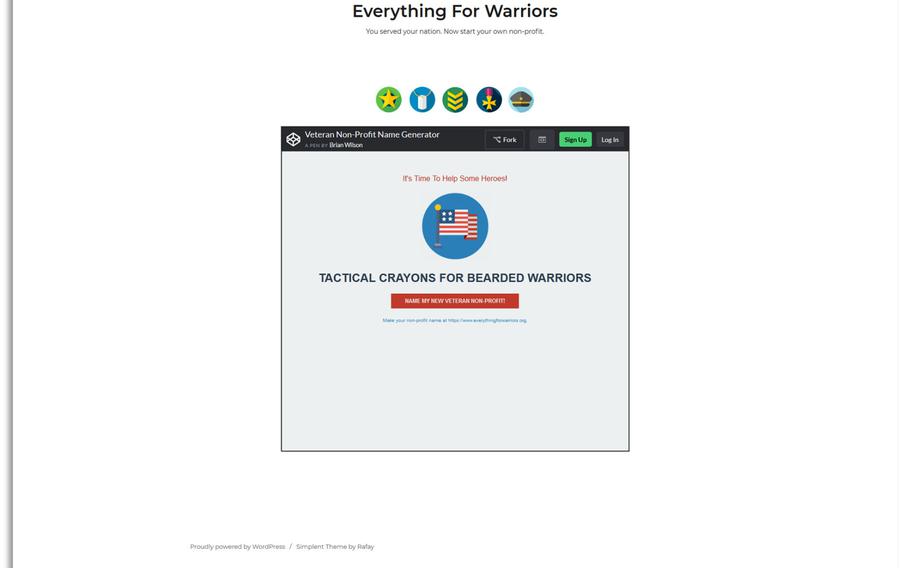 Just in case it seemed that every conceivable military-charity niche was filled, a new website offers ideas that will likely raise eyebrows, if not funds.

There’s Water Aerobics for Hipster Veterans, Toothpaste for Rangers and Cheezwiz for American Soldiers, all suggested by a random name generator at everythingforwarriors.org.

The site’s a joke, but with a serious point, said creator Brian Wilson. It’s a satire on the tendency of well-meaning people to fill a need in the veteran or military community by creating an extremely niche nonprofit, the former Army combat medic said.

The years after 9/11 saw a boom in nonprofits for servicemembers, veterans and their families. Some grew rapidly, helping thousands, others have shuttered due to poor management. Still others have been plagued by scandals or found to be scams. There are also many of questionable value, offering freebies or services of dubious worth.

Wilson, who has benefited from charities including Wounded Warrior Project and The Mission Continues, has seen more than his share of both good and bad veterans charity ideas in real life, he said. He’s a bit jaded.

The nonprofit-naming site is about eight months old, but it languished in relative obscurity until he posted the link on social media Sunday, partly to poke fun at for-profit businesses that also seem to think slapping a military-related brand on something will lead to guaranteed success.

A six-year National Guard veteran who served in Iraq in 2006 to 2007, Wilson now works at Houston-based Combined Arms, a nonprofit that refers former servicemembers to vetted charities or government agencies for assistance. There are a lot of nonprofits that don’t pass muster to earn referrals, he said.

“There are some 250 places that offer help to veterans in Houston alone,” he said. “Some have disappeared, some have been investigated for fraud, some have succeeded and some ... are just there not really making an impact.”

He’s seen veterans and others rush to found ill-advised charities, he said. Many don’t realize nonprofits are still businesses subject to the laws of supply and demand.

Veterans have come to him saying they want to start a nonprofit to help vets find work, while simultaneously asking for his help finding a job. One group raised cash for wheelchairs before figuring out which veterans, if any, needed wheelchairs.

It’s common for people to think they need to start a nonprofit to make a difference, said James Schmeling, an Air Force veteran who taught entrepreneurship and business boot camps to transitioning servicemembers. Often, it’s not the answer.

“If what you want to do is do good, figure out who’s doing good and support them,” said Schmeling, who is executive vice president of the nonprofit Student Veterans of America. He also helped found the Institute for Veterans and Military Families at Syracuse University and the Coalition for Veteran Owned Business.

Passionate about a specific idea? Offer to do it for an existing nonprofit rather than spawning a new one, Schmeling said.

Of course some small ideas grow into something more, he said. For example, SoldierStrong went from sending socks and baby wipes to Marines in Afghanistan to providing scholarships, physical rehabilitation and bionic prosthetics to disabled veterans.

As extremely online veterans have been tweeting out screenshots of nonprofit names the site suggests, traffic has spiked by 230 percent, Wilson said.

Nick Palmisciano, an Army veteran and founder of the military t-shirt company Ranger Up, posted his result, Pancakes for Redheaded Veterans.

Daniel Riley, an Iraq and Afghanistan veteran, got Speed Walking for American Sailors. Riley was medically retired from the Marine Corps after surviving an improvised explosive blast that resulted in the amputation of both of his legs.

The name generator draws from a list of about 300 nouns or phrases and pairs them with various military terms, with a sprinkling of modifiers like a state name or adjective, Wilson said.

He and a buddy brainstormed the most random things they could come up with. What very specific thing aren’t troops getting? Expired prescription drugs. It went on the list.

“That was the fun part of coming up with that list,” Wilson said. “Trying to come up with the most ludicrous things.”

One of his favorite results: “Cuddles for Airmen.”