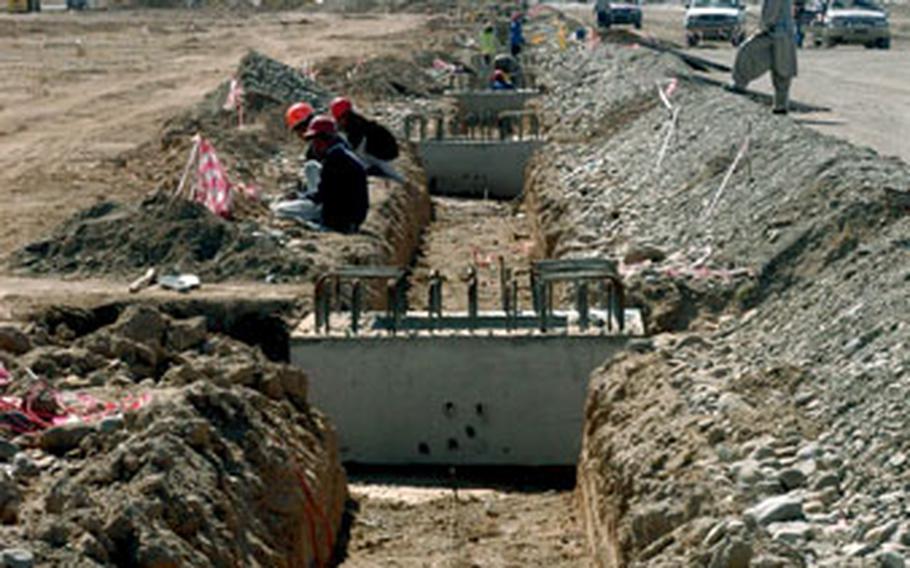 A massive effort is under way to lengthen and widen the runway at Kandahar Airfield to allow more varied uses of the largest coalition base in southern Afghanistan. (Kent Harris / S&S)

A massive effort is under way to lengthen and widen the runway at Kandahar Airfield to allow more varied uses of the largest coalition base in southern Afghanistan. (Kent Harris / S&S) 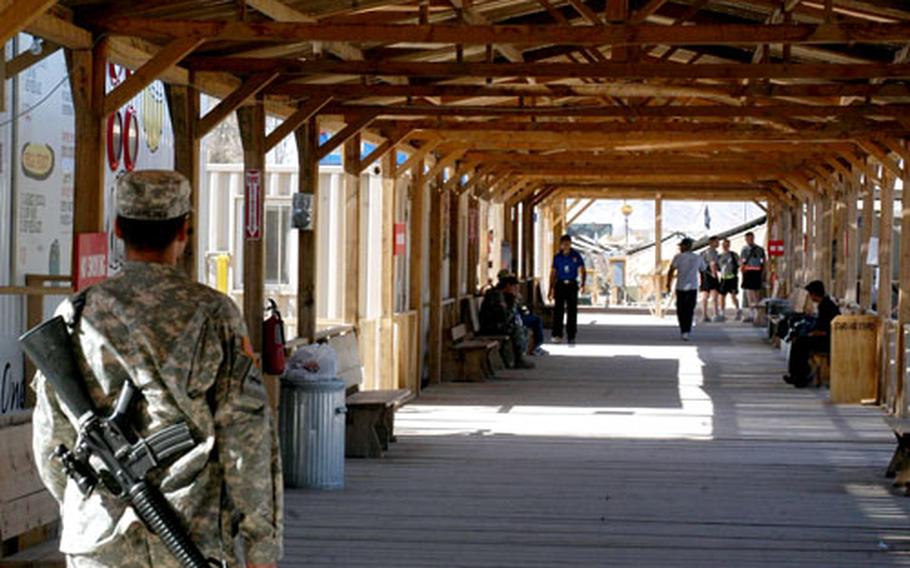 A wooden boardwalk lies at the heart of Kandahar Airfield in Afghanistan. Trailers featuring restaurants and shops line the exterior of the boardwalk, with a large open space in the interior that might one day sport athletic fields. (Kent Harris / S&S)

KANDAHAR AIRFIELD, Afghanistan &#8212; So what if the nearest ocean is hundreds of miles away?

That doesn&#8217;t mean coalition troops and civilians stationed at the largest military base in southern Afghanistan can&#8217;t enjoy a (sometimes bouncy) walk on the boardwalk, and grab some American fast food while they&#8217;re at it.

The wooden structure, located near the geographic center of the base, was a pet project of Lt. Col. Jim Hardy, the recently departed base operations commander.

There used to be a smaller version between the office complex commonly referred to as the &#8220;Taliban&#8217;s Last Stand&#8221; and the base exchange.

In several respects, the partially completed boardwalk serves an example of the state of construction on the airfield: It&#8217;s in use, though it&#8217;s still not complete; it&#8217;s somewhat temporary in nature, but geared toward the future; and it&#8217;s designed to serve a number of purposes.

Stores on the outer edge of the boardwalk include trailers for Subway, Pizza Hut and Burger King, an AT&T phone center and a handful of embroidery, alteration and gift shops.

Row after row of metallic housing units fill the spaces near the boardwalk. American and Romanian troops live in most of the units, which feature common bathrooms and showers with potable water. Although the units are designed to house thousands, there are still thousands living in tents to the south and west. That&#8217;s due to an influx of Canadian and British troops that&#8217;s boosted the base population to about 8,500. More troops, especially from the Netherlands, are expected to push the numbers up by another 1,000 in a few months.

That&#8217;s put a strain on the three dining facilities on base.

He said the main dining area, composed of a series of heavy tents, is getting old and needs to be replaced. Both the Canadian and British forces have talked about building a larger facility to replace it, he said.

Near one of the tents, a pair of large metallic buildings serve as a social center, especially at night. One has weights and exercise equipment. The other houses what&#8217;s probably the best array of morale, welfare and recreation activities in the theater. There are large-screen televisions for video games, pool tables, music rooms, a movie theater, a coffee shop and a couple cabinets full of books.

A little further on from that are the base&#8217;s sewer ponds. The smell carries with the wind. A new water treatment facility should be up and running this month. Hardy said an expanded facility &#8212; likely requiring an investment by coalition partners &#8212; could eliminate the sewer ponds entirely.

The international air terminal, a longtime landmark, has been separated from the rest of the base by a long line of concrete blocks that Torres said people have nicknamed &#8220;The Great Wall.&#8221; That&#8217;s allowed some civilian use of the terminal and runway. About 3,500 local nationals used it to travel to Mecca for the hajj in December.

As for the runway itself, work is under way to lengthen it and widen it. That would allow more traffic and other types of aircraft to operate out of the base. NATO and individual members also plan various ramp projects and other improvements in the coming months.

Hardy had hoped to have at least one road paved on base by the time he left, but he said drainage still needed to be improved and sidewalks installed before that could happen. As it stands, the only dedicated spaces for foot traffic on base are in between the tents and buildings. And, of course, the boardwalk.