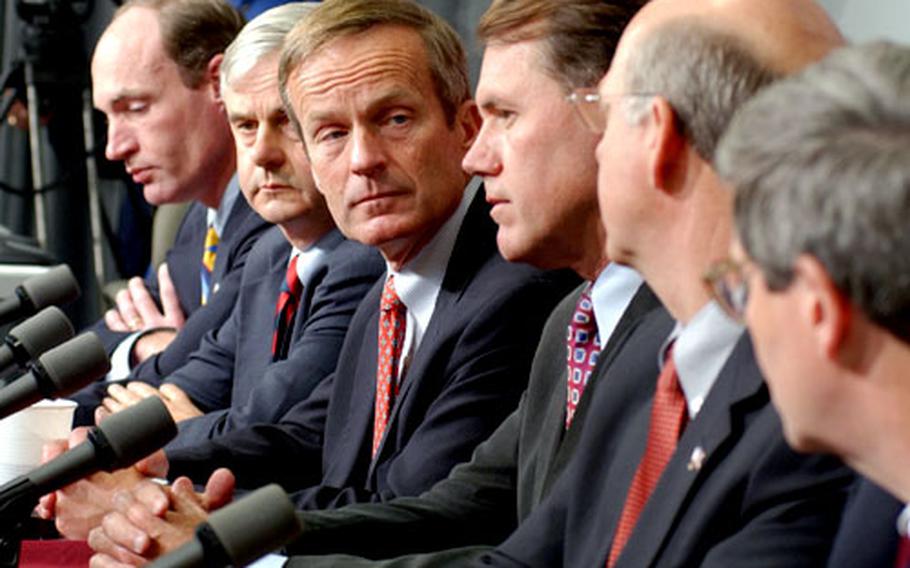 LANDSTUHL, Germany &#8212; Six U.S. congressmen visiting Iraq to study small-business opportunities got a close-up look at the danger facing U.S. soldiers and its aftermath at a military hospital in Germany.

The delegation of four Republicans and two Democrats happened to be in midair Sunday on a C-130 transport plane over Iraq when word of the deadly Chinook crash came to the pilots in the cockpit, Rep. Todd Akin, chairman of the House small-business subcommittee, said during a news conference Tuesday.

Akin, R-Mo., said the trip, which included visits to troops in Baghdad, Balad, Tikrit and Kirkuk, helped the representatives understand the perils troops face as well as the progress they are making.

The Chinook crashed after witnesses reported seeing a missilelike object hit the aircraft. Fifteen soldiers were killed and 21 were injured. The injured soldiers are being treated at Landstuhl Regional Medical Center in Germany and Walter Reed Army Medical Center in Washington, D.C.

Most of the time, the representatives were traveling via Black Hawk helicopters, said Rep. Brad Miller, D-N.C.

&#8220;It is unmistakable that Iraq is still a war zone,&#8221; Miller said. He said there is an average of 35 attacks a day against soldiers and 95 percent of those soldiers survive their injuries, he said.

Tensions among the group were a little higher when they were flying in blackout conditions at night.

&#8220;After we knew the Chinook had gone down and we flew at night in a darkened helicopter, we knew this was a dangerous place and we&#8217;re at war,&#8221; said Democrat Ed Case of Hawaii.

However, he said: &#8220;Whatever increased risk we faced, it was nothing compared to what the frontline troop goes through every day.&#8221;

The delegation made a stop at the military hospital in Landstuhl, which has treated more than 7,000 injured and ill servicemembers from the Iraq war. The congressmen met with several injured soldiers, one whose arm had been amputated by a rocket-propelled grenade, and another who was injured by a homemade bomb.

Akin said the trip brought home to the delegation the realities of the war on terrorism, though &#8220;it comes at a cost.&#8221;

As of Monday, 376 U.S. servicemembers have died since the beginning of military operations in Iraq, according to the Defense Department. On Tuesday, the death toll increased to 377 when a 1st Armored Division soldier was killed in a roadside bombing.