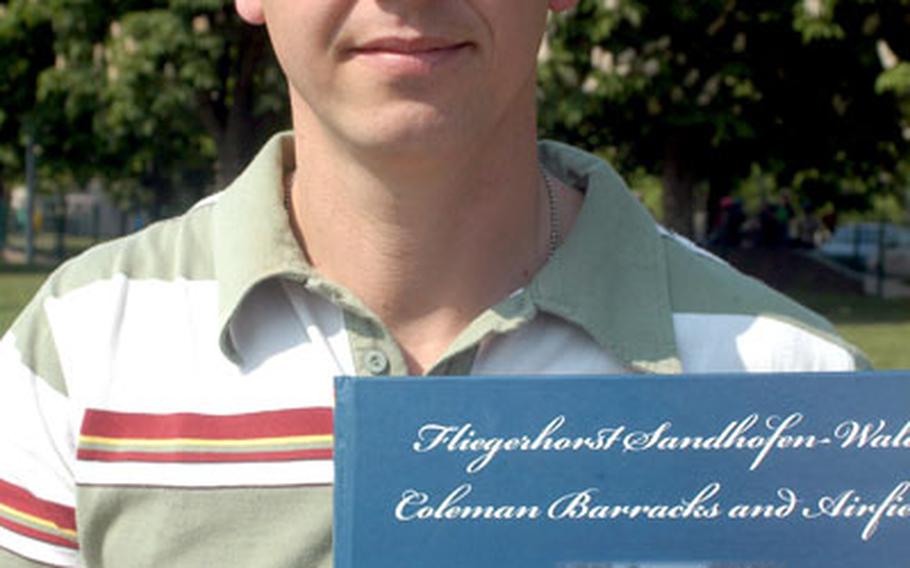 Dirk Schulz, an air traffic controller at Coleman Army Airfield, holds a book he wrote on the history of the airfield — from its secret beginnings in 1936 as the Nazis began building an air force through World War II and its occupation by U.S. forces. (Nancy Montgomery / S&S)

MANNHEIM, Germany &#8212; The base that today serves as an airport for U.S. generals and houses the Army&#8217;s only military prison in Europe once had a different role.

Priests from Luxembourg were imprisoned here at a work camp under the Nazis. And some of Germany&#8217;s top World War II fliers used it as their home base.

Dirk Schulz, an air traffic controller at Coleman Army Airfield, on Coleman Barracks, decided that the airfield&#8217;s 70-year history was too important to be lost as people who knew what had happened there grew old and died.

Schulz, 38, a former NATO air traffic controller, spent years researching the airfield where his job is to ensure that aircraft containing top U.S. military brass, along with the occasional C-130 containing special forces troops, do not collide with German executives&#8217; private jets.

The result, after years of effort and thousands of euros spent, is a hard-cover, self-published book, researched, written and formatted by Schulz.

&#8220;Coleman Barracks and Airfield: An Airfield Through the Changes of Time&#8221; contains arcane charts, historical photos and a first-person account of a Luxembourg priest who, with others, was imprisoned there for criticizing the Nazis, although the priest denied it.

The book contains an account of three unidentified people lined up against a wall and shot, even before the airfield &#8212; then a German Fliegerhorst or &#8220;eagles&#8217; nest&#8221; &#8212; was completed. At the time, the Nazis were starting to secretly build an air force in the 1930s, despite being banned from doing so by the Treaty of Versailles that ended World War I.

Schulz, a German national who is rearing his two young daughters to speak German and English, says Luftwaffe pilots were the &#8220;role models&#8221; of their day.

He quotes newspaper accounts of Armed Forces Day, March 19, 1939, when the public was allowed for the first time to see the air base and its pilots in action. That was less than six months before Germany invaded Poland and set off the largest and deadliest war in history, which, by some estimates, killed more than 60 million people.

&#8220;This day demonstrates the sign of a great German military and a defending shield for Germany. Fliegerhorst! It was an affair of honor to be with the cloud breakers,&#8221; one newspaper wrote.

The base was heavily bombed in 1944, and in spring 1945, U.S. soldiers crossed the Rhine River and liberated Mannheim. The base was renamed Camp Y-79, and an Army aviation engineering battalion had it back in business within three days, according to Schulz.

The book appeals especially to Germans and Americans who lived through the era, Schulz says, as well as aviation and World War II buffs. It is available through his Web site: www.fliegerhorst-sandhofen-coleman.de.