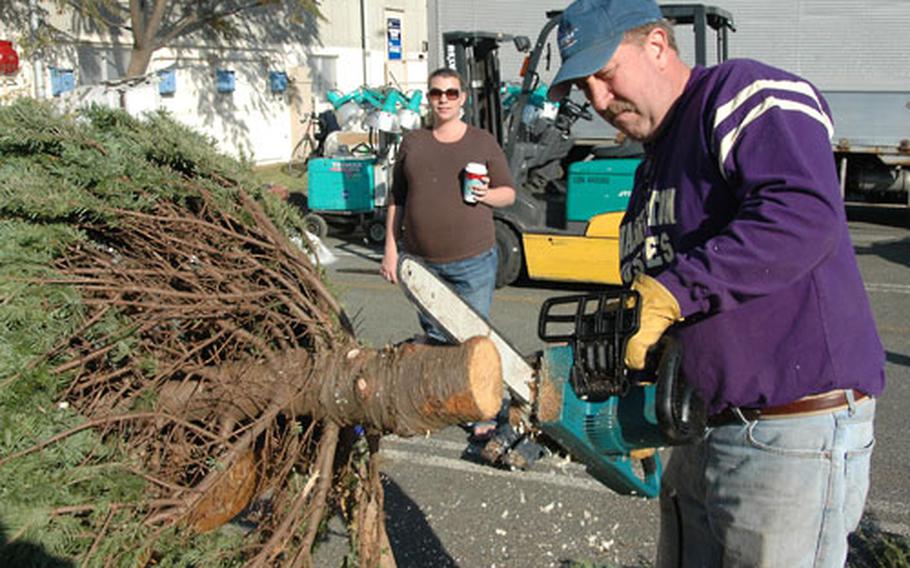 Now that Thanksgiving has your fat pants fitting just right, it&#8217;s time to rearrange the furniture to figure out where to put the tree.

The seasonal shift of holiday gears has hit high speed with the opening of Christmas tree stands on Pacific bases.

As at most bases, Yokosuka Naval Base began selling trees Friday.

&#8220;This morning we had a line of people waiting for the doors to open, and we have been selling steady ever since,&#8221; Mike Owyen, a Navy Exchange regional manager, said Friday afternoon.

The trees are priced according to size and needle longevity, ranging from about $18 to $60.

Owyen said trees at NEX outlets in Yokosuka and Negishi, Atsugi, Sasebo, Hardy Barracks and Singapore will be sold out no later than mid-December.

But Misawa Air Base families who didn&#8217;t buy a live Christmas tree over the weekend will have to wait until next year, unless they&#8217;re interested in two 7- to 8-foot-tall evergreens.

&#8220;They were flying like the wind caught them,&#8221; he said. The Boy Scouts buy trees from the Army and Air Force Exchange Service and resell them.

Last year, the scouts set up shop at their scout hut at Rocky&#8217;s Roost, between main base and north area, and had trouble selling all of their stock.

This year, they were given permission to sell trees in a much more visible location &#8212; outside in the corner between the base exchange and commissary, Van Over said. This year&#8217;s inventory was based on demand from last year, Van Over said. He said the scouts will try to get more trees next year.

On Okinawa, the shipment of trees for the Army Air Force Exchange System recently cleared the agricultural quarantine inspection and should be on sale at the Camp Foster exchange Wednesday or Thursday, said Air Force Master Sgt. Donovan K. Potter, an AAFES spokesman. Potter said AAFES receives only one shipment of live trees, so customers shouldn&#8217;t dally.

How to make your tree last

&#8220;Every day, believe me, the trees will drink it up, and it will help keep the needles from falling all over the place,&#8221; said Navy Exchange regional divisional manager Mike Owyen.

And the straighter and more balanced your tree, the less chance of it falling over.

As for preservation, many exchanges sell a solution that may be added to the water. For those who prefer to do it themselves, adding sugar or a can of pop to the water will help extend the life of your tree.