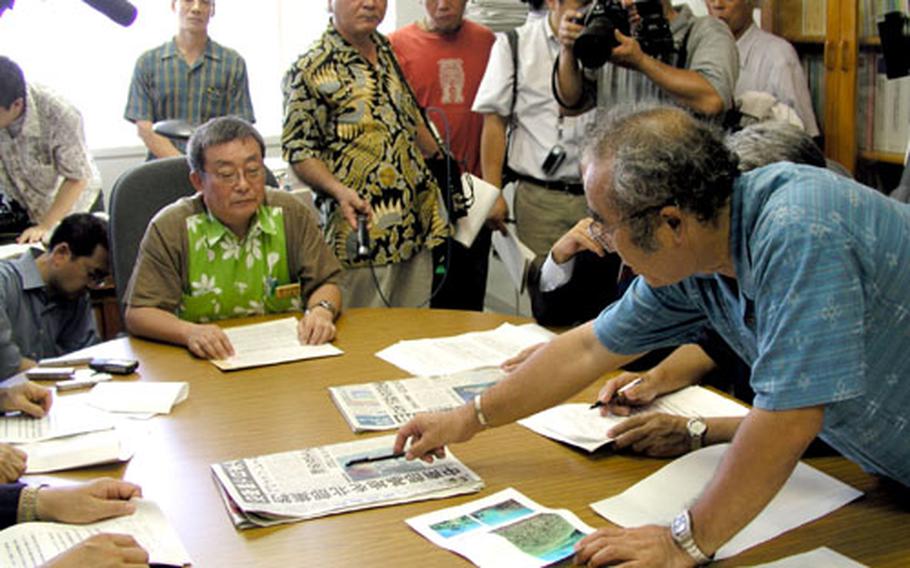 NAHA, Okinawa &#8212; Okinawans reacted negatively Thursday to a compromise announced by U.S. and Japanese officials to replace Marine Corps Air Station Futenma &#8212; long a source of noise and safety complaints &#8212; with an airport to be built on Camp Schwab.

U.S. and Japanese officials agreed Wednesday in Tokyo to scrap a plan to replace MCAS Futenma in urban Ginowan with a more remote, sea-based airport in northeast Okinawa. Instead, they agreed to a smaller facility to be built on existing Camp Schwab property and extended on landfill into Oura Wan Bay.

Details have yet to be set.

An interim report on realigning U.S. troops in Japan is expected to come from the so-called &#8220;2-plus-2" meeting in Washington this weekend. Secretary of State Condoleezza Rice and Secretary of Defense Donald Rumsfeld are meeting with Japan Foreign Minister Nobutaka Machimura and Defense Agency Director-General Yoshinori Ohno and hope to issue their report before President Bush&#8217;s slated mid-November Tokyo meeting with Prime Minister Junichiro Koizumi.

That still is far less than the 12 years estimated for the original replacement project.

Koizumi said persuading local governments to agree to the plan would take time. &#8220;It&#8217;s not a problem that will be solved in a few years,&#8221; he said at a news conference Wednesday night.

U.S. Forces Japan had little to say about the new plan Thursday. &#8220;We still continue to be informed concerning the discussions and look forward to an outcome that benefits the U.S.-Japan security alliance,&#8221; said USFJ spokesman Marine Maj. James Bell.

Okinawa Gov. Keiichi Inamine was briefed Thursday morning about the agreement at a 50-minute meeting with Masanori Nishi, Defense Facility Administration Naha Bureau director. In a news conference afterward, Inamine said he was &#8220;not pleased.&#8221;

Inamine said he &#8220;would demand a clear explanation&#8221; if the new plan ditches his demand for joint civilian use of the proposed Camp Schwab air station.

About 20 members of a group opposed to all U.S. bases on Okinawa protested in front of Naha prefectural offices Thursday morning and met with Reiji Fumoto, Inamine&#8217;s counselor on military affairs. They vowed to continue a camp-in protest they began in April 2004.

The activists effectively halted an environmental survey of the Henoko area where the now-abandoned project was to be built.

Said Etsumi Tairabori, 71, of Ginowan, where Futenma is located: &#8220;This is obvious discrimination against the people of Okinawa by our own government, which ignores our voices.&#8221;

Retired teacher Fumiko Nakamura, 92, considered an icon of the Okinawa anti-base movement, said, &#8220;My body shivered when I heard the news. Consolidating the military bases to the northern area will never be acceptable to Okinawans.&#8221;

A coalition of Japanese and U.S. conservation groups also vowed Wednesday to continue its fight against building any facility in waters it claims are a habitat for dugongs, saltwater manatees.

The group&#8217;s 2003 suit against the project, filed in U.S. Federal District Court in San Francisco, demands the U.S. Defense Department comply with the National Historic Preservation Act, which requires U.S. agencies to assess their activities&#8217; impact on other nations&#8217; cultural assets.