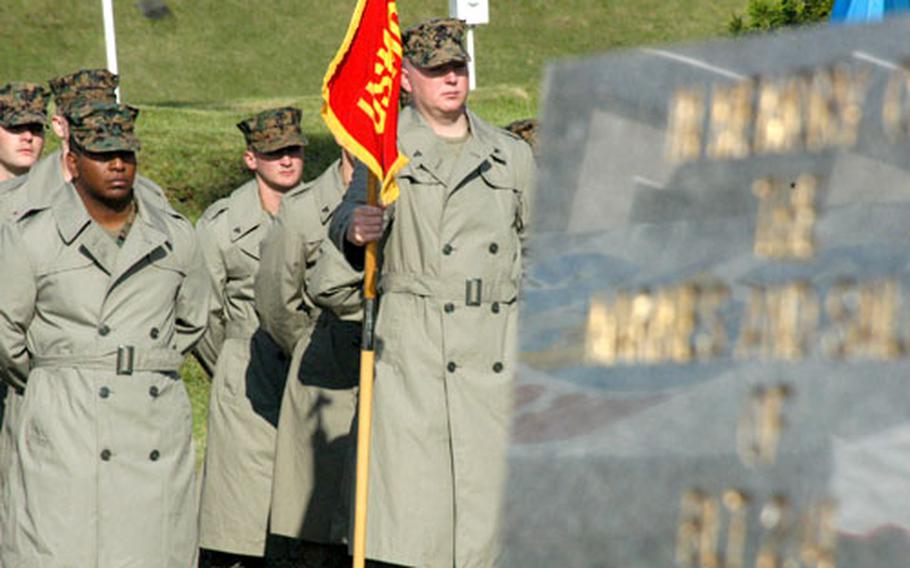 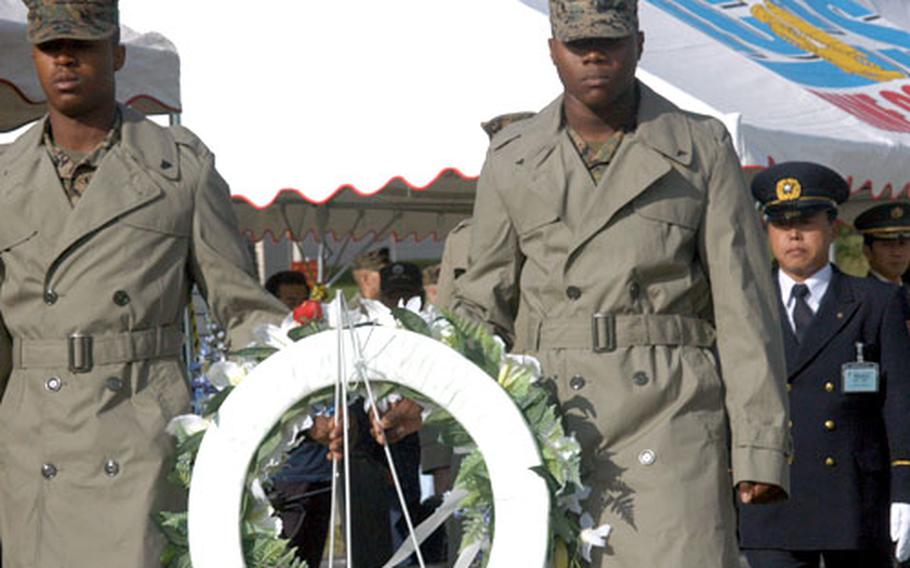 The observance marked the Oct. 19, 1979, blaze, triggered by a typhoon, that killed 13 Marines and injured dozens more.

&#8220;Remembering those who sacrificed so much that day 26 years ago is a special responsibility,&#8221; Tabak told the crowd. &#8220;When Marines make the ultimate sacrifice, we have a duty to remember that sacrifice. I find it an honor to pay tribute to those who have fallen.&#8221;

In October 1979, Typhoon Tip, the strongest storm to reach mainland Japan in 13 years, brought 115 mph winds and heavy rains to Fuji. More than 1,250 Marines from Camp Schwab, Okinawa, were being housed in Quonset huts on the installation&#8217;s upper half for training.

A fuel farm consisting of two rubber storage bladders kept in place by a retaining wall sat just up the hill. After rains from Tip eroded the wall and allowed a bladder to break free, hoses sprang loose, releasing 5,000 gallons of gasoline.

The fuel skimmed the water&#8217;s surface and ran across upper Fuji and into the Quonset huts. Shortly after 1:40 p.m., a heater inside one of the huts ignited the gasoline.

&#8220;The disaster on Camp Fuji &#8230; is one I can never forget,&#8221; he said through a translator. &#8220;When we arrived, I witnessed a very horrible spectacle. I saw injured Marines with their skin charred. The sight was so shocking I forced my eyes to turn away. But I had to keep my composure.

By 3:45 p.m., the blaze was under control but still not extinguished entirely. Fifty-one Marines and three Japanese lay injured, 15 huts were destroyed and several other buildings damaged.

Casualties were evacuated to hospitals in Gotemba, Naval Airfield Atsugi, Yokosuka Naval Base and Yokota Air Base, as well as Brooks Army Medical Center in San Antonio. Vehicles and ambulances from Fuji schools and Takigahara Garrison supported the transport, while Atsugi&#8217;s Headquarters, 3rd Detachment of the USS White Plains, a combat stores ship, provided airlift support for helicopter evacuations.

Of the 54 people taken to medical facilities, 13 Marines later died from their injuries.

Tabak praised the quick response and &#8220;brave sacrifice of the firemen of Takigahara and Gotemba&#8221; for preventing further loss of life.

&#8220;If not for &#8230; the local fire departments, many more Marines, sailors and civilians would have been injured and killed that day,&#8221; he said. &#8220;The Marine Corps will never forget those who died and those brave firemen who saved many lives at great risk to their own.&#8221;

&#8220;Historically, the Marine Corps looks at its past to build for the future,&#8221; he said. &#8220;Those Marines died in an accident but they did die serving their country. To remember those Marines who put down their lives is highly important. It could happen today, whether in garrison, Afghanistan or Iraq.