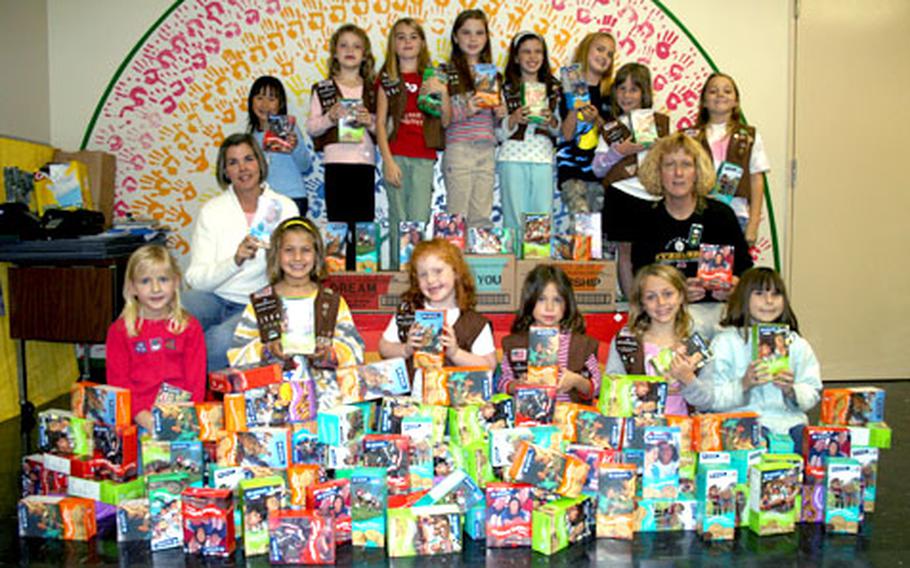 The girls of Brownie Troop 404 on Camp Foster pose with the more than 150 boxes of cookies they sent to servicemembers in Iraq and Afghanistan. The photo was included with the cookie packages and the girls have been receiving e-mails thanking them for their donations. (Photo courtesy of Paula Blivin)

The girls of Brownie Troop 404 on Camp Foster pose with the more than 150 boxes of cookies they sent to servicemembers in Iraq and Afghanistan. The photo was included with the cookie packages and the girls have been receiving e-mails thanking them for their donations. (Photo courtesy of Paula Blivin) 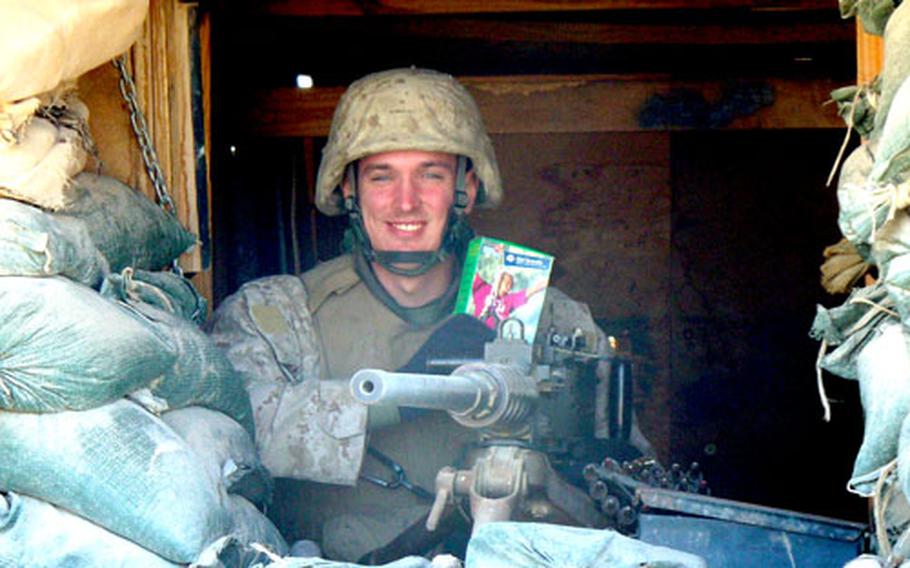 An unidentified Marine smiles as he holds a box of Thin Mints Girl Scouts cookies at his post in Fallujah, Iraq. (Photo courtesy of Lt. Col. Stephen Wilson)

CAMP FOSTER, Okinawa &#8212; Brownie Troop 404 has been getting lots of feedback about the Girl Scout cookies they&#8217;ve delivered recently, but these aren&#8217;t the typical thank yous: They are e-mails describing the smiles the tastes of home are bringing to troops deployed to the Middle East.

When the local Girl Scout cookie campaign kicked off islandwide in early January, the 700-plus girls put out boxes where buyers could donate boxes of cookies or money to purchase cookies to be sent downrange. More than 1,000 boxes for those deployed were collected during the drive &#8212; more than 150 of those by the 15 girls in Brownie Troop 404, according to Paula Blivin, the &#8220;cookie mom&#8221; for the troop.

Blivin said the troop asked around to see if anyone knew of deployed servicemembers, either from Okinawa units or friends and family members, and came up with 16 recipients. Each received between 10 and 18 boxes of cookies &#8212; one or two boxes of each kind, Blivin said. Included with the cookies was a letter from the troop, along with a group photo, and an e-mail address in case recipients wanted to respond.

One recipient, Marine Lt. Col. Stephen Wilson in Baghdad, e-mailed Blivin to say: &#8220;I must say I had to smile when I saw the contents of the package you sent. The words &#8216;Girl Scout cookies&#8217; spread rapidly throughout our section and they have been enjoyed by many.&#8221;

Wilson added that he was planning to deliver cookies to troops the next time he went to Fallujah. He followed through, later sending Blivin a photo of a Marine standing behind a machine gun holding a box of Thin Mints.

Brownie Paige Blivin, 7, said it was a lot of fun to send the cookies to the troops, adding it made her feel good.

Her mother said teaching the girls about lending a hand is a nice side note to the cookie sales.