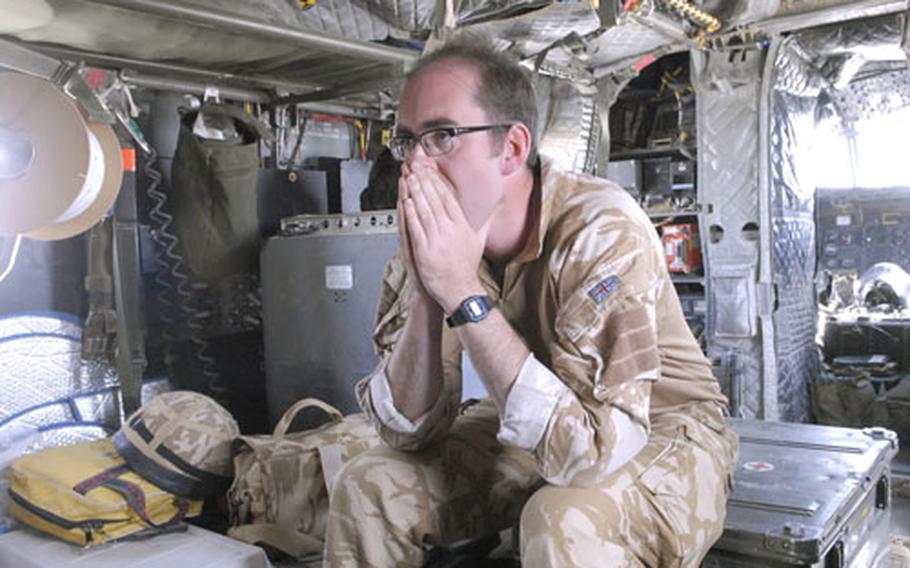 British Army Maj. Andy Haldane, 33, a member of the Medical Emergency Response Team, prepares himself mentally on the CH-47 Chinook helicopter after a call came through for a possible mission. The MERT can be ready in under 9 minutes from the time they get the call until take-off to pick up wounded soldiers or civilians. (Dianna Cahn / S&S)

British Army Maj. Andy Haldane, 33, a member of the Medical Emergency Response Team, prepares himself mentally on the CH-47 Chinook helicopter after a call came through for a possible mission. The MERT can be ready in under 9 minutes from the time they get the call until take-off to pick up wounded soldiers or civilians. (Dianna Cahn / S&S) 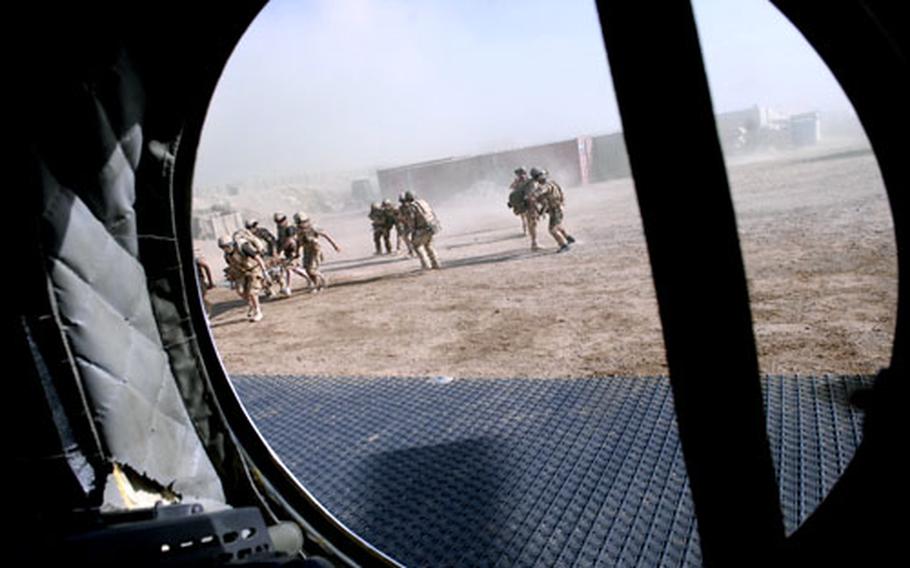 Members of the British military&#39;s Medical Emergency Response Team run toward their Chinook helicopter with a patient who was critically wounded by a makeshift bomb on the battlefield. On the helicopter, the MERT team are equipped to stanch bleeding, and give the patient fluids and blood transfusions. (Dianna Cahn / S&S) Members of the British military&#39;s Medical Emergency Response Team load a patient who was critically wounded by a makeshift bomb off the battlefield and onto their CH-47 Chinook helicopter where they can give him preliminary medical treatment. (Dianna Cahn / S&S) Members of the British military&#39;s Medical Emergency Response Team carry the critically wounded soldier from the CH-47 Chinook helicopter to an ambulance waiting on the ground near the hospital at Camp Bastion in Helmand Province. (Dianna Cahn / S&S)

HELMAND PROVINCE, Afghanistan &#8212; The patient on the stretcher was in grave shape. His patrol had struck a roadside bomb, and the soldier had apparently been right on top of it. All his limbs were severed, he&#8217;d lost too much blood and he&#8217;d gone into cardiac arrest.

As the British ambulance helicopter raced back to a field hospital, one paramedic pumped the young soldier&#8217;s chest in a desperate effort to keep his heart beating while the rest of the team gave the victim every bit of life they could find in their bags.

It was not enough. The soldier died a short time later.

It&#8217;s not always this grim. Emergency response team members say that with the technology, preparedness and experience with war injuries their teams have been accumulating over the course of the wars in Iraq and Afghanistan, they save a majority of their patients.

Midmorning, a fresh team arrived to take over from McGlynn&#8217;s group, which had just completed 24 hours on call. The two teams caught up. Then a call came in.

At the helicopter, the fresh team learned that several Afghan soldiers were killed and wounded in a firefight, but the situation was too intense for them to go out yet. An hour&#8217;s wait on the helicopter led to an all-clear, giving these emergency crewmembers some time to reflect on what they do.

&#8220;The British spend a lot of money training us to do this,&#8221; he said, rattling off six full years of courses he had to go through to qualify for a position on the team. In addition to regular nurse&#8217;s training, he was given courses in emergency care, major incident care, emergency response, weapons and military training, helicopter and aeromedical evacuation training, trauma life support and anesthetics training for nurses, among them.

&#8220;The experts are not in agreement over the best way to handle these trauma patients, whether for speed or for the interventions we can do,&#8221; said Haldane, 33, of Birmingham. &#8220;We are still not 100 percent clear whether what these people need is &#8216;as fast as possible back to surgery&#8217; or &#8216;as fast as possible back to surgery with the intervention we can do with anesthesia and a blood infusion.&#8217; We feel it is best to take the emergency care unit to the patient as best as possible.&#8221;

For the newest member of the team, Tony Stephens, 37, the opportunity to participate in emergency response is exciting. Unlike other reserve forces who come to a war zone leaving their job and their civilian expertise behind, as medical professionals, team members are practicing their chosen careers, only more intensely.

&#8220;This is the sort of pinnacle of emergency care,&#8221; said Stephens, an ambulance paramedic in the civilian auxiliary in North Wales who volunteered to serve. &#8220;Just think what&#8217;s happening medically to guys on the ground getting injured. It&#8217;s phenomenal to be a part of that.&#8221;

Haldane wondered if folks back home even realize their country is at war, rather than some simmering counterinsurgency. People count up the dead, but nobody notices the wounded, he said.

The day passed without another job, giving an unlikely foursome a lot of time on their hands. Needing to stick together in case of a call, they drove around conducting errands together and helping Senior Air Craftman Cathryn Strong, 31, search for her brother who&#8217;d just arrived in camp that day.

Then, as the night rolled in, so did a call. The team scurried to the helicopter and launched into the dark night.

An IED. One severely wounded. One less so.

They landed on a dark piece of Helmand in blackness and returned with a patient on a stretcher. He was missing a leg and his second leg was bandaged up to his groin.

But, unlike in the call 12 hours ago, this young man was awake and his body was withstanding the damage of an inhuman blast.

For him, the medicine he&#8217;d receive that night in the air would be life nectar. He would survive.