Arnold pumps up troops in Iraq on Fourth 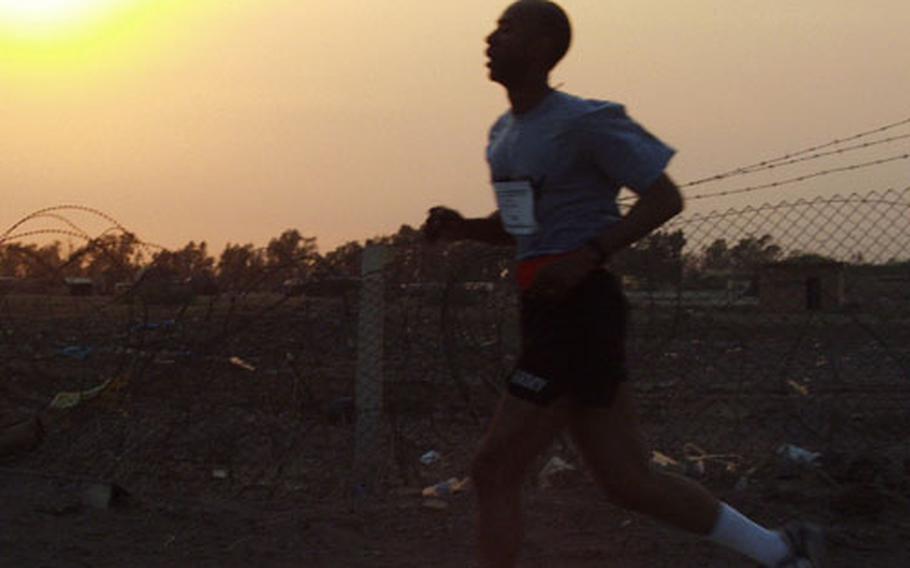 Reginald Smith, the command sergeant major of the 2nd Battalion, 501st Aviation Regiment, nears the end of his 5-kilometer run Friday at Baghdad International Airport. Smith’s battalion sponsored the race, which started a day of sports, food and general celebration of the Fourth of July. (Kent Harris / S&S)

Reginald Smith, the command sergeant major of the 2nd Battalion, 501st Aviation Regiment, nears the end of his 5-kilometer run Friday at Baghdad International Airport. Smith’s battalion sponsored the race, which started a day of sports, food and general celebration of the Fourth of July. (Kent Harris / S&S) 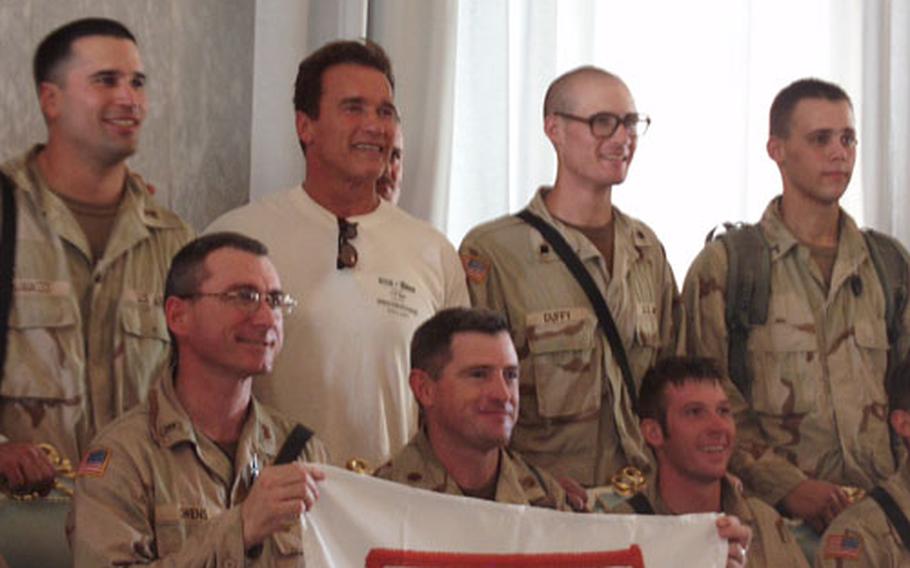 Movie star, famed bodybuilder (and future politician?) Arnold Schwarzenegger poses with troops during a visit Friday to Victory Camp on the outskirts of Baghdad, Iraq. Schwarzenegger spent hours talking to troops, posing for pictures and eating with them. He was scheduled to visit other locations in Iraq to help boost morale on the Fourth of July. (Kent Harris / S&S)

A typical Fourth of July it wasn&#8217;t. American troops across Iraq celebrated their country&#8217;s Independence Day in all sorts of ways Friday, including hobnobbing with the &#8220;Terminator&#8221; himself, Arnold Schwarzenegger.

&#8220;We&#8217;ve been working 24 hours a day, seven days a week, and this is a good opportunity to give the soldiers a break,&#8221; said Maj. William Howard, executive officer of the Hanau, Germany-based 2nd Battalion, 501st Aviation Regiment.

Howard was referring to a schedule of sports, food and entertainment that members of his unit and others from the 1st Armored Division&#8217;s 4th Brigade had planned at Baghdad International Airport.

A few hundred members of the brigade started their day at 6 a.m. with either a 5-kilometer or 10-kilometer &#8220;fun run.&#8221; It wasn&#8217;t clear if it was the running itself or the hour of day that made it &#8220;fun.&#8221; It did take an interesting twist, though, when some runners veered off course and crossed paths with those competing in a similar event sponsored by the 3rd Infantry Division.

Schrote called his unit into formation after the last runner finished. He asked them to reflect on the country&#8217;s proud military history for a few minutes before coming to attention for the national anthem.

After that, it was time to get going again, as teams started a series of tournaments in several sports. The day was set to end with a talent show and dinner in one of the hangars the brigade calls home.

A few hours after the run was over, entertainment of another sort was being provided a few miles away. Movie star Schwarzenegger elicited smiles with a short speech that featured several catchy phrases from movie roles that made him a star &#8212; and a &#8220;Saturday Night Live&#8221; sketch that parodied him.

Schwarzenegger, most known for his action-movie roles, also took a comedic turn while referring to his trip into the camp.

He also mentioned the poverty, demolished infrastructure and &#8220;leadership vacuum&#8221; he had seen.

Rumored to be a potential candidate for governor of that state, Schwarzenegger then showed some political skill &#8212; as well as his action-hero endurance &#8212; by posing for pictures for hours with hundreds of troops.