Amid Lakenheath hospital renovations, some deliveries will be off-base 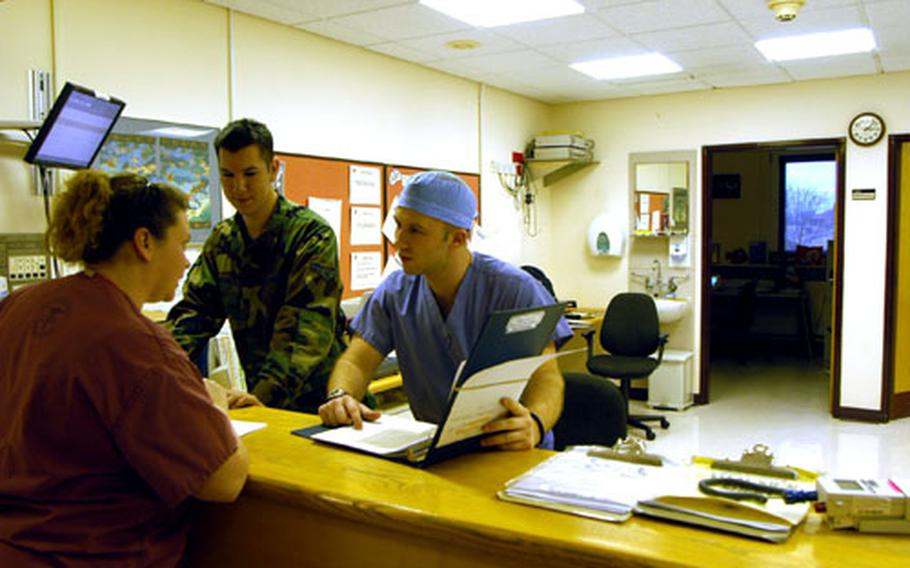 Staff Sgt. Amanda Shaurent, 30, of Huntington, Pa., Airman 1st Class Anthony Lozano, center, 22, of Allen, Texas, and Airman 1st Class Douglas Goens, 22, of Lancaster, Ky., tend to their duties in the labor-and-delivery section of the RAF Lakenheath hospital. The area where they are working will be converted into two private rooms in a renovation project set to be completed in the fall. (Bryan Mitchell / S&S) Sarah Burnett holds her newborn daughter, Rachel Madison, while they recover in a double room in the 48th Medical Group hospital on RAF Lakenheath. The labor-and-delivery section is set for a renovation that will convert 14 double rooms into 11 private rooms. (Bryan Mitchell / S&S) Signs of construction abound at the 48th Medical Group hospital. The $11 renovation will affect five parts of the hospital, including the labor and delivery section. (Bryan Mitchell / S&S)

RAF LAKENHEATH &#8212; The 48th Medical Group hospital is in the midst of a massive renovation project that promises to bring the facility up to contemporary American standards. But there are going to be some growing pains along the way.

Medical sections ranging from physical therapy to optometry will be affected by the $11 million renovation, but patients most affected will be pregnant women who may have to deliver at a British hospital.

The labor-and-delivery section soon will lose 25 percent of its bed capacity as work gets under way in April to convert the current allotment of 14 double rooms to 11 single rooms, according to the 48th Medical Support Squadron commander, Lt. Col. Rex Langston, 49, of Moses Lake, Wash.

The new 350-square-foot rooms will be equipped with comfortable furniture and a bassinet, which means the current nursery will be supplanted by a much smaller one. The renovation is slated to take five months.

The RAF Lakenheath labor-and-delivery section is the busiest in U.S. Air Forces in Europe, delivering about 511 babies last year. That&#8217;s compared to an estimated 199 at the Spangdahlem/Bitburg hospital and 178 at the Aviano Air Base hospital in 2007, according to USAFE.

The Air Force community first learned of the move in a Dec. 4, 2007, letter from the obstetrics and gynecology flight commander, Lt. Col. Kathryn F. Tate.

&#8220;The OB clinic must decrease the enrolled pregnant population during the time of the construction; otherwise there is a high potential to divert patients to the NHS unexpectedly during labor,&#8221; the letter states. &#8220;Currently our enrolled patients exceed our labor bed capacity by 15 percent.&#8221;

While the approximately $2 million construction project is under way, the labor-and-delivery section will have 10 rooms, Langston said. That equates to a diminished capacity that will leave certain patients looking to Britain&#8217;s National Health Service.

Those most likely to be affected are civilian employees and contractors who serve at so-called geographically separated units such as RAFs Croughton, Fairford, Alconbury and Menwith Hill as well as retirees, Langston said.

Langston acknowledged consternation from families about the possibility of not being able to deliver their baby in an American hospital.

Langston noted that all high-risk pregnancies will be transferred to Addenbrooke&#8217;s Hospital in Cambridge, which is the case regardless of the renovation.

A set of new parents said the renovation has positives and negatives. Shelby and Sarah Burnett spoke to Stars and Stripes less than eight hours after they welcomed 7-pound, 11-ounce Rachel Madison into their lives.

&#8220;I think it will be good, being able to keep the baby in the room with you and when one baby starts crying they can wake the other one up, so that privacy will be nice,&#8221; said Shelby Burnett, a 28-year-old Air Force Office of Special Investigations special agent from Antlers, Okla.

But Sarah Burnett said there is a benefit to the shared rooms.

Both, however, said the thought of delivering Rachel Madison off-base was not welcome.