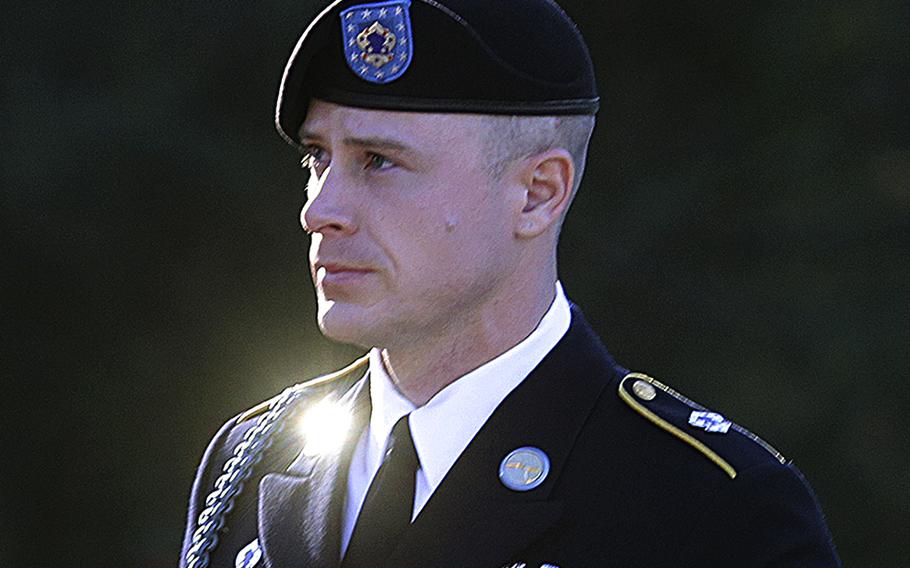 WASHINGTON – Some eight years after Army Sgt. Bowe Bergdahl walked off his combat outpost in the mountains of eastern Afghanistan, he is expected to plead guilty Monday to charges he deserted his unit and misbehaved before the enemy, endangering his fellow soldiers.

The plea would follow years of legal wrangling between Bergdahl’s attorneys and Army prosecutors, but Monday’s court hearing at Fort Bragg in North Carolina will not end the saga for the 31-year-old who spent five years in the custody of Taliban-aligned militants in Pakistan.

The plea hearing only sets the stage for yet another court proceeding scheduled to begin Oct. 23, a process unique to military courts-martial in which evidence will be presented during a pre-sentencing trial. In Bergdahl’s case, that trial is likely to include testimony about three servicemembers who were severely injured on missions to rescue him, and it could last several days.

But since The Associated Press reported on Oct. 6 that Bergdahl’s attorneys would enter a guilty plea to the charges of “misbehavior before the enemy by endangering the safety of a command, unit or place” and “desertion with intent to shirk important or hazardous duty,” it remains unclear what led to that decision and what it could mean.

The Army on Thursday announced Bergdahl would enter his plea during the hearing Monday. However, neither Bergdahl’s lead attorney Eugene Fidell nor chief prosecutor Army Maj. Justin Oshana would comment about the plea or acknowledge whether an agreement had been reached. The more serious misbehavior charge carries a potential life sentence while the maximum sentence for the desertion charge is five years imprisonment.

A guilty plea would not necessarily indicate Bergdahl’s attorneys have reached a deal with prosecutors and the four-star general overseeing the case, known as the convening authority, according to several military law experts who spoke with Stars and Stripes.

“The fact that [Bergdahl’s plea] comes a week ahead of time doesn’t tell me if he has a deal with the government or not,” said Eric Carpenter, an assistant law professor at Florida International University and a former Army defense attorney and prosecutor. “It just means that he’s going to plead guilty.”

If a deal exists, Army Col. Jeffery R. Nance, the judge in the case, would acknowledge it at the hearing Monday, Carpenter said. However, the terms of the agreement would not be made public until the pre-sentencing trial has concluded and Nance has made his own ruling on Bergdahl’s punishment, he added. By military law, the judge cannot be influenced by the terms of a deal.

Ultimately, if the convening authority, Gen. Robert Abrams, the chief of Army Forces Command, has approved a plea bargain, Bergdahl would receive the lesser of two possible sentences – the punishment agreed to in that deal or the judge’s sentence rendered following the trial.

If no deal exists – known as a “naked plea” – it indicates Bergdahl’s attorneys are throwing their client’s future at Nance’s mercy, said Rachel VanLandingham, an associate professor of law at Southwestern Law School in Los Angeles and a former Air Force judge advocate.

“With a guilty plea, the judge has to take into consideration … that the guy is taking responsibility and saying, ‘I did this, I’m throwing myself at your mercy’,” she said. “I think [Nance] has been very thorough and very reasonable. He’s been a bit predictable, thoroughly by the book, but he gets it.”

Bergdahl’s defense attorneys have failed to sway Nance on several major motions that sought to have the case thrown out over comments made by top U.S. officials, including Sen. John McCain, R-Ariz., who is the chairman of the Senate Armed Services Committee, which has oversight over the military. The soldier’s lawyers also attempted to have the case dismissed over disparaging comments made by President Donald Trump during his campaign, which he never recanted after taking office.

Defense attorneys also failed to convince Nance that testimony about the three servicemembers injured on search and rescue missions – two Army National Guard members and a Navy SEAL – should not be included at the sentencing phase.

Allowing that evidence at sentencing boosted the prosecution’s case, VanLandingham said, and it might have pushed the defense team toward entering a guilty plea.

Nonetheless, a naked plea would be a risky move, she and Carpenter said.

“It can backfire,” Carpenter said. “If he doesn’t have a deal, they could go in there and enter this naked plea and come out with a life sentence.”

Carpenter said the guilty plea would not be surprising. Ultimately, Bergdahl, who remains on active duty working a desk job at Joint Base San Antonio in Texas, was very likely to be found guilty, he said.

The soldier admitted to a two-star general after he was released from captivity in May 2014 that he left Observation Post Mest in Paktika province without permission before he was kidnapped by Taliban fighters. In his admission, Bergdahl said he did not intend to desert his unit, but instead he wanted to cause a commotion that would place him in front of top officers to air grievances about his chain of command.

An Army psychiatrist later determined when Bergdahl left his post he was suffering from schizotypal personality disorder, a mental illness in which individuals fail to understand the impact of their behavior on others and often leads to severe anxiety, according to the Mayo Clinic.

Despite his “severe mental disease or defect,” Bergdahl “was able to appreciate the nature and quality and wrongfulness of his conduct,” the psychiatrist, Col. Christopher L. Lange, concluded in July 2015.

Bergdahl’s mental condition, which officials concluded contributed to his washing out of initial Coast Guard training before he enlisted in the Army, is likely to come up at the pre-sentencing trial, Carpenter said.

“I expect Fidell will argue that the Army shares some blame here,” he said. “They brought in somebody that should never have been in the Army in the first place – someone already with mental health problems, and then they put him in the most stressful place that exists – a small [outpost] in the middle of the most hostile part of Afghanistan, and then gee, surprise, surprise, he had a breakdown.”

After Bergdahl’s admission, the investigating general and another Army official recommended he not face jail time and be tried in a misdemeanor-level, special court-martial. Abrams rejected those suggestions in December 2015 when he referred Bergdahl’s charges to a felony-level, general court-martial.

Bergdahl’s mental issues could be a factor in the judge’s sentencing decision, Carpenter said.

“The issue itself will come up and it is completely relevant,” he said.