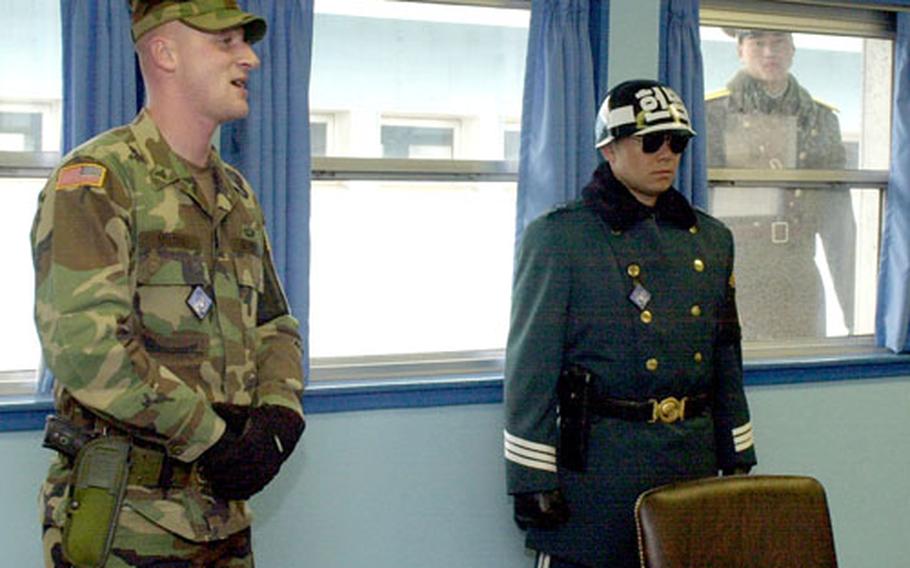 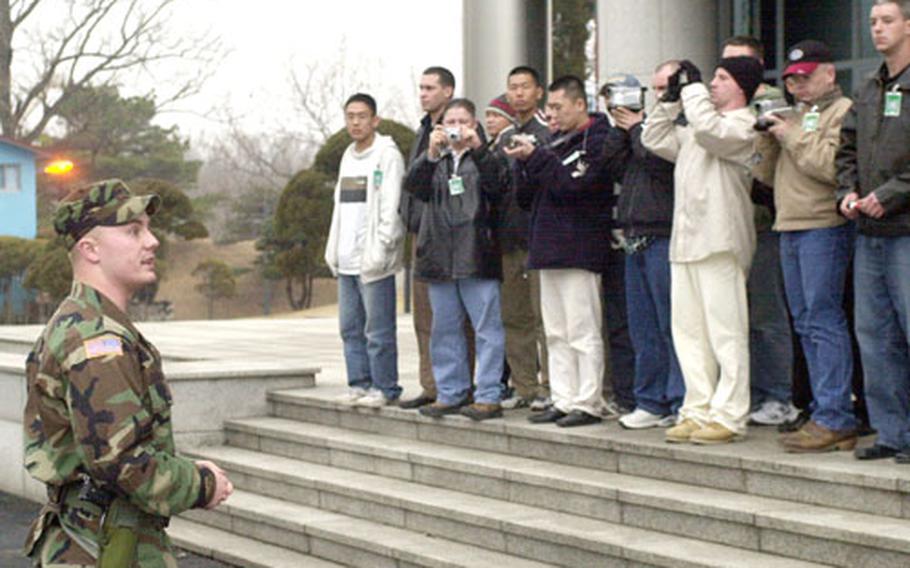 CAMP BONIFAS, South Korea &#8212; First of all, they don&#8217;t like being called tour guides. No one at Disney World carries a loaded 9 mm pistol on Space Mountain.

The 8th Army soldiers who act as security escorts, as they prefer to be known, for the 160,000 visitors who come each year for a look at the Korean Demilitarized Zone and Joint Security Area are military police with infantry backgrounds.

They are trained for myriad scenarios ranging from visitors bounding over the North Korean border to an enemy attack.

They also are trained to greet the Dallas Cowboys Cheerleaders.

&#8220;This is way different than normal infantry duty,&#8221; said Sgt. Andrew Hubbard, who arrived seven months ago from Fort Benning, Ga. &#8220;You have to know everything about your old job as well as the new job requirements.&#8221;

That is what the first three weeks are like, Hubbard said.

After that, security escorts, like the other soldiers in the United Nations Command Security Battalion, work six days a week. They may guide a few bus loads of 2nd Infantry Division soldiers in the morning, a group of Japanese tourists around noon and an ambassador in the afternoon.

The variety staves off any sense of isolation, Hubbard says.

The escorts also have met their share of celebrities and leaders over the years. Cheerleaders notwithstanding, President Bush, Secretary of State Condoleezza Rice, Colin Powell, Wayne Newton and Alex Trebek have been among visitors since 2002.

After four months of escorts, Sgt. John Dotson has performed about 200 tours. An escort obviously can&#8217;t be afraid of public speaking or large crowds, which never has been a problem for Dotson.

Dotson was &#8212; and some of his coworkers may not know this until now &#8212; an opera singer back home at Northern Iowa Community College.

It&#8217;s a safe bet that Luciano Pavarotti never started his day with an 8-mile run.

Dotson, like all escorts, instructs visitors not to acknowledge the North Korean soldiers, who sometimes like to play games.

Part of Dotson&#8217;s tour cites events during the past 53 years when communication between the two sides moved beyond little tests.

Since that incident, the two sides no longer mix within the JSA.