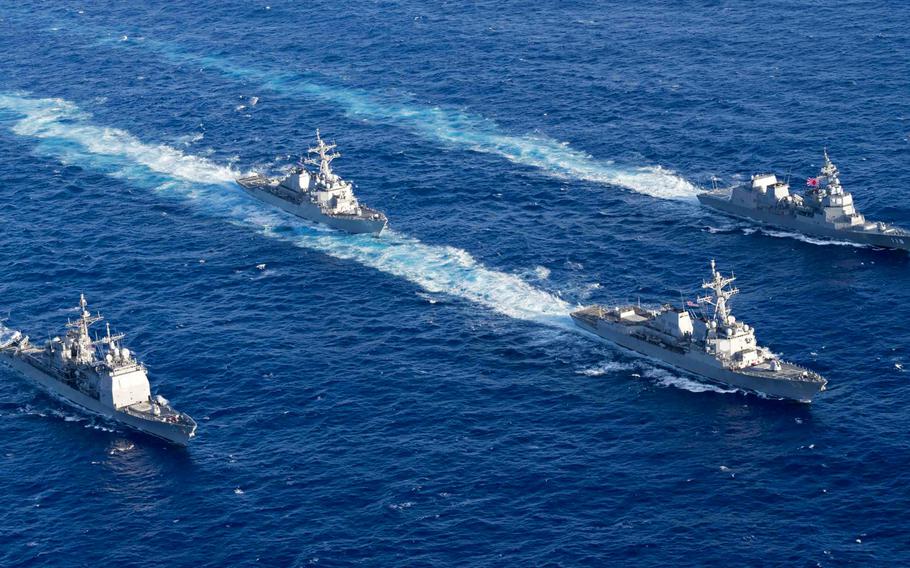 YOKOSUKA NAVAL BASE, Japan — The Navy sailed two Japan-based ships through the Taiwan Strait on Monday amid ongoing tensions over freedom of navigation in the western Pacific and political strains over trade with China.

The ships passed “from south to north through the Taiwan Strait” in a “free navigation of the US ship around China,” the Taiwan Ministry of National Defense said in an official statement published Monday evening. The ministry noted that U.S. ships “routinely [pass through] the international waters of the Taiwan Strait” and said the U.S. explained “the relevant details” of the trip to Taiwanese officials.

“The Ministry of National Defense emphasized that during the period of US ships passing through the seas around China, the national army is in full control and response, and has the ability to maintain the security of the seas and airspace and ensure regional peace and stability,” the statement said.

Two U.S. defense officials told CNN that multiple Chinese warships followed the Yokosuka-based 7th Fleet ships at a safe distance. China had yet to issue a statement on the passage as of Tuesday morning.

China considers Taiwan a province of the mainland and officials have stated over the years that the democratic island’s continued self-rule cannot continue indefinitely. Taiwan receives support and defense funding from the United States in line with a 1979 bilateral agreement.

On July 7, the Navy sent the guided-missile destroyers USS Benfold and USS Mustin through the Taiwan Strait, prompting criticism from China.

“The US is aggravating Taiwan Strait tensions,” China’s state-controlled Global Times newspaper said on Twitter after that transit. “The PLA Navy [has] monitored the situation and has it under control …”

Pacific Fleet officials described it as a “routine transit.” It was the first transit through the strait since July 2017.

Pentagon spokesman Lt. Col. Chris Logan told reporters during a press briefing Monday that the Defense Department had “no information indicating now any unsafe or unprofessional behavior from China” during or after the Taiwan Strait transit, according to a Tuesday report by the U.S. Naval Institute.

Last month, the Chinese destroyer Luyang “conducted a series of increasingly aggressive maneuvers” as the USS Decatur sailed through the Spratly Islands in the South China Sea, according to Lt. Cmdr. Tim Gordon, a spokesman for U.S. Pacific Fleet.

The Luyang came with “45 yards of [the] Decatur’s bow, after which [the] Decatur maneuvered to prevent a collision,” Gordon said. At the time, Gordon called the Luyang’s maneuvers “unsafe and unprofessional.”

Although the U.S. and most nations consider much of the 110-mile Taiwan Strait to be international waters, transiting there has long been a source of tension for Beijing. In 1996, China conducted a series of missile tests nearby a small Taiwan-controlled island as a show of strength, after Beijing’s government accused Taiwan of independence sentiments in the runup to a presidential election on the island.

In response, the U.S. sent two aircraft carrier groups through the Taiwan Strait. Since that time, China has rapidly modernized its naval forces and begun its own carrier program. China has also constructed artificial islands atop submerged reefs in the South China Sea and placed weapons and aircraft on them. Chinese ships have used force and coercion to prevent access to islands in the region claimed by smaller nations, U.S. officials have repeatedly said.

The operations also come as Beijing and Washington spar over billions of dollars in recently announced tariffs. The U.S. has also accused China of engaging in cyberattacks against the U.S. government and businesses.

The U.S. has maintained that it is following the rule of international law during its freedom-of-navigations patrols. Christensen said in his statement that the Navy “will continue to fly, sail and operate anywhere international law allows.”